Xiaomi Mi 5 launch is right around the corner, even though we're still not sure when exactly does Xiaomi plan to release their new flagship. We've seen a number of Mi 5 and Mi 5 Plus rumors thus far, and according to the latest available info, the Mi 5 might launch in October, and Mi 5 Plus is said to follow in November. That being said, Xiaomi Mi 5's specifications have leaked earlier today, and now it seems like the phone has paid a visit to AnTuTu benchmarks. Let's see what's what, shall we.

If you take a look at the picture down below, you'll get to see the alleged Mi 5's results on AnTuTu. It seems like the Xiaomi Mi 5 managed to score 73,075 points on AnTuTu. Now, the aforementioned spec leak has said that the device might be fueled by Qualcomm's Snapdragon 820 64-bit SoC, but it seems more likely that Xiaomi will opt for MediaTek's Helio X20 chip this time around. Why? Well, the answer is quite simple, the Snapdragon 820 won't be available until Q1 2016, and the Helio X20 is probably going to be launched before the end of the year, so it might be included in the Mi 5 which will almost certainly going to be launched in Q4 this year. Also, the Helio X20 chip managed to scored around 70,000 on AnTuTu back when it was tested, so the information kind of adds up.

The Xiaomi Mi 5 is rumored to sport a 5.3-inch QHD (2560 x 1440) display along with 4GB of RAM and 16 / 64GB of non-expandable in-built storage. The device will probably be powered by the Helio X20 SoC, and a 16-megapixel rear-facing camera has also been mentioned in various rumor, including the latest one. The device is also said to sport a 3,030mAh battery, Type-C USB 3.0 port and a fingerprint scanner. Android 5.1.1 Lollipop will come pre-installed on the device with Xiaomi's MIUI 7 installed on top of Google's operating system. The Xiaomi Mi 5 will almost certainly going to be made out of metal, at least partially. As you can see, the Mi 5 will be a very powerful handset once Xiaomi finally launches is. All we can do at this point is wait for some more information, Xiaomi will hopefully unveil the device soon, stay tuned. 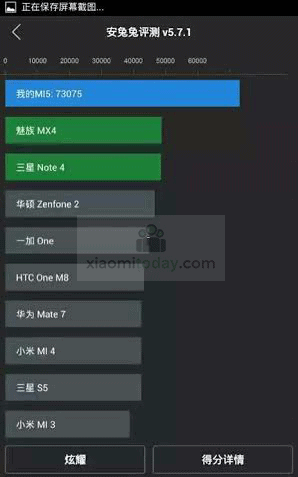