Xiaomi was incredibly successful last year. The company managed to become China’s number one smartphone OEM and ship 61 million smartphones. Xiaomi is looking to improve upon that next year, and they’ve released a number of really compelling handsets thus far. The company has unveiled their flagship Mi Note phablets, along with a slew of other devices, like the Mi 4i for example. This is the first Xiaomi handset to make it to India before anywhere else, and it’s more than a decent mid-ranger, not to mention it’s quite affordable.

Well, we’ve spotted another variant of Mi 4i in China recently, dubbed Mi 4C. The reports have been claiming that the ‘C’ stands for China, and the device has also surfaced on TENAA (China’s equivalent to the FCC) quite recently. The device was said to sport Qualcomm’s Snapdragon 808 64-bit hexa-core SoC, and a newly-leaked retail box of the device actually confirms that fact. If you take a look at the provided images, you’ll notice that not only the Snapdragon 808 is listed here, but some other details about the device as well. The box says that the Snapdragon 808 will be clocked at 1.8GHz, and that the device will ship with 3,000mAh battery. 4G LTE support will be on board as well, and the device will also sport the Type-C USB 3.0 port that we’ve seen on the OnePlus 2 (and a couple of other smartphones) recently.

According to the previously-leaked AnTuTu listing of this device, this thing will be identical to its predecessor (aside from SoC, of course). The phone will sport a 5-inch 1080p (1920 x 1080) display, 2GB of RAM and 16GB of internal storage. The 13-megapixel shooter will be available on its back, and a 5-megapixel snapper will be located up front. Android 5.1.1 Lollipop will come pre-installed on this smartphone, and Xiaomi’s MIUI OS will be placed on top of it. We still don’t know which variant of MIUI will be installed though, MIUI did unveil MIUI 7 recently, but it’s still unknown if this phone will come with that version pre-installed. Either way, Xiaomi is expected to announce this handset soon, so stay tuned. 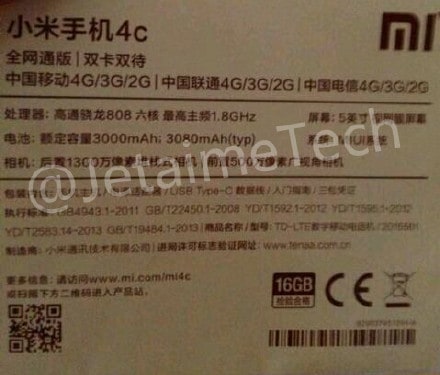