Wearable devices are a becoming a big part of today’s society, with more gadgets being released almost every day the wearable market as a whole has thoroughly expanded over the past few years. Currently, there are several different types of wearable devices available for purchase, with completely different functionality and characteristics the market has a lot of variation between devices. For example, there are wearable devices designed with the sole purpose of measuring the various elements of the user’s health, such as his or her glucose levels and heart rate; contrasted by the smartwatch area of the wearable market, which has it as a main goal to extend the user’s smartphone into his or her own wrist for easy access to content without any major effort. Today, Tractica released a complete study of the wearable market; in said study, the company took all the current trends and areas of wearable technology, and reported that the market will continue to diversify into new individual device categories, application markets, and even different services.

In the released paper, Tractica takes into consideration 10 key trends that the whole wearable market has been having considerable progress. The main key component in the list is how wearable technologies have diversified so much that a single market can no longer describe all the gadgets that might be included in it, as wearables are no longer constituted exclusively of smartwatches and fitness trackers; wearable devices’ developers are exploring beyond those two areas, reaching strong innovation points which lead to new types of devices, a great example of this are the relatively new “hearables“. Another important aspect that has faced a significant growth, is that Google and Apple are not the only companies that have created their own wearable operating system, as new startups have adventured and designed their own operating systems exclusively for their wearable device in order to give the user the best experience possible.

Tractica is quite certain that the current growth of the wearable market will lead to an even greater diversification into different segments, dividing the market into at least 6 wearable categories, including smartwatches, smart clothing, smart glasses, body sensors, and wearable cameras. “The wearables market is a collection of micro trends within each device segment, application area, and world region,” noted Aditya Kaul, Research Director at Tractica. 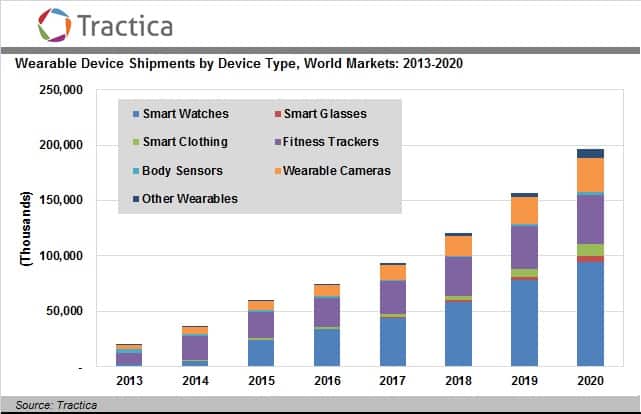