Sprint has held the third-place ranking in overall network performance for quite a while now, but that doesn’t mean that the company is stalling in any way, as Sprint is not comfortable with the third spot at all and will continue to work hard for a better position. Something that Sprint is inherently proud of, is its the pace at which the company is improving its own network and “closing the gap” on its major competitors AT&T and Verizon. The company released a public statement today in its official blog, in which a study made by RootMetrics is addressed, and several of the most important findings for Sprint were showcased.

The main point that Sprint talked about, was how it is no longer too far behind AT&T and Verizon in terms of their networks’ overall performance, stating that the speed at which Sprint’s network is improving is rather surprising. Across the nation, Sprint managed to jump to the third place during the first half of the year, coming from the last position just one year ago, in terms of the reliability of the company’s network performance; Sprint also moved up a spot and entered a two-way tie for second place in call network performance. All of this information shows that if Sprint keeps up the hard work that it has done over the last year, the gap between itself and the other two major carriers will become smaller, until it eventually disappears. “An analysis of the Nielsen data shows our network is improving at a faster rate than our competitors, and we’re closing the gap in overall network performance”, Sprint stated in their blog post, making emphasis on how the increase on the average performance of the carrier’s network could be acquainted to its continuous focus on optimization and the expansion of 800MHz and 2.5GHz service.

The 1H 2015 US Mobile Network Performance Report by RootMetrics, has the main goal of completely informing both existing users for the four major carriers as well as possible customers about the pros and cons of each carrier; RootMetrics, made sure to include as much data as possible, but Verizon only seemed to comment about the positive pieces of information that RootMetrics published which would positively affect them; this is something understandable, but it would be nice for once that a carrier addressed their weak points and how they are working on them instead of just speaking about what would make the company look better. 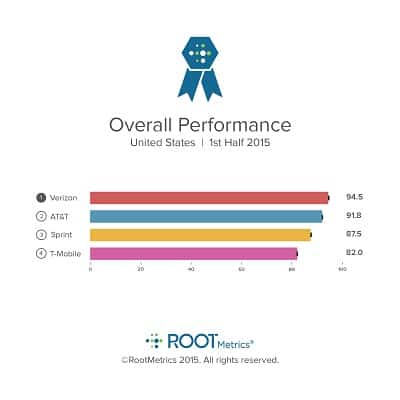