WCC Chinese Dictionary is an app aimed at helping you learn to read and write the Chinese language, as well as speak it by learning modern-day Chinese pronunciation. It’s a collective of tools to help anyone who has the desire to learn with a focus on teaching the language quickly yet still efficiently. Using WCC’s various learning techniques, learning the Chinese language looks to be easier than other methods while also being fun and effective. It’s also a practical tool for travelers, business people, and students who need to look up words and communicate while in China.

Before you can get started with learning the Chinese language, you’ll need to head to the Play Store and download WCC Chinese Dictionary, then you’ll be set and on your way to learning how to read, write, and speak Chinese. 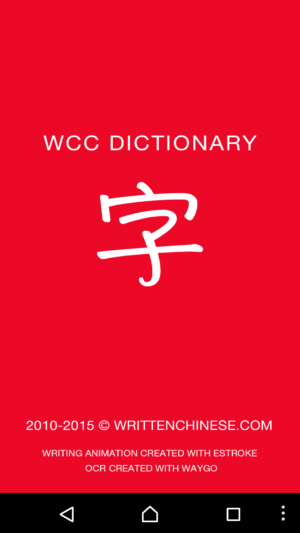 If simply want to start with learning how to write Chinese characters, WCC Chinese Dictionary offers free character stroke order animations (using WCC’s eStroke animation software) so you can see how each character or Chinese word is properly written. In addition, it can show you the radicals (or base parts) of each character for a better understanding of the word’s meaning and origin.

The app also works fully offline so you don’t have to worry about having a data connection to continue the learning process. Thus, you can take it with you and still use everything the app has to offer, which is great if you are travelling in China and don’t have access to the Internet or studying offline. 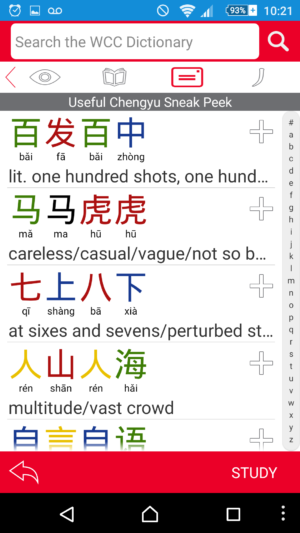 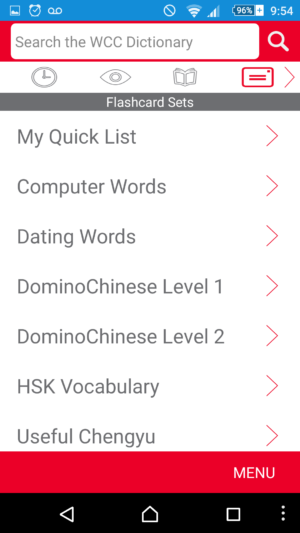 Also uniquely available in the WCC Dictionary app is the ability to use your smartphone’s camera with built-in Waygo Optical Character Recognition (OCR) software so you can translate Chinese words into either English or Pinyin, making translations much simpler. Simply point your phone’s camera at a group of Chinese characters, press a button and the characters will be instantly translated. The free version of the tool limits customers to ten OCR translations per day, while an in-app purchase allows for unlimited use of the OCR Chinese character reader.

The UI has been recently overhauled to create a smoother interface, providing customers with a dashboard where daily homework is displayed along with a dictionary search bar, a Chinese character of the day and various quick links to other tools to maximize your learning progress. The “Character of the Day” is displayed in both simplified Mandarin (Used primarily in Mainland China) and traditional Mandarin (Used in Hong Kong and Taiwan). Tap “Learn More” to understand how to use the character in a sentence and how to properly speak each character with correct Mandarin pronunciation. 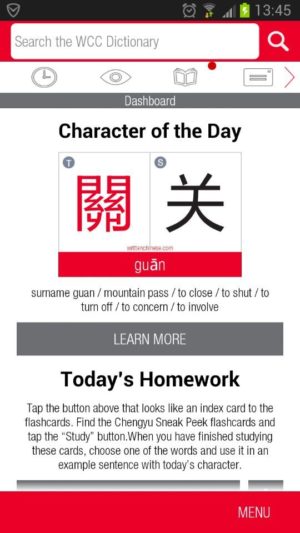 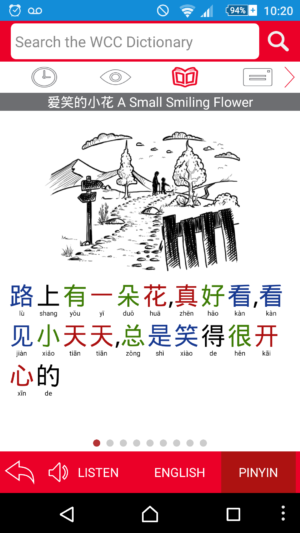 A complimentary website exists that offers online tools and resources to further your Chinese studying. Purchases made online at writtenchinese.com automatically sync to your Android device. WrittenChinese.com also provides an interactive Facebook page as well as a weekly updated blog page. 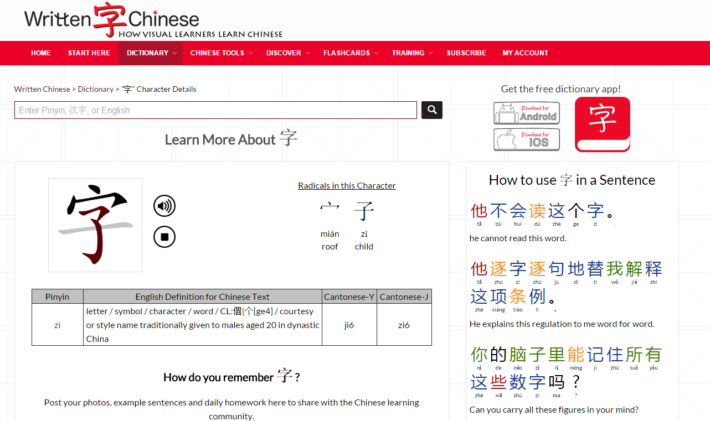 If you’re serious about learning the Chinese language, WCC Chinese Dictionary looks to be a comprehensive tool that can help you with the process. Learning a new language can seem like a difficult task at first, but WCC has created an app which aims to make learning Chinese as simple as possible while still allowing the user to learn the language properly. It offers up a lot of different tools and ways to learn the language that should be suitable for various learning types, and it doesn’t just help you learn one portion of the language. It helps you learn how to read, write, and speak it. I found the interface to be very user-friendly and very uncomplicated compared to other language learning tools.

As stated above, learning a new language can feel like a difficult task, but WCC Chinese Dictionary has put together an app which seeks to make completing this task as simple and efficient as possible. The free version has a wealth of useful tools to help anyone who wants to learn Chinese, and you get more useful tools and help with the paid version. Whether you want to learn on the go with the app or use the PC/Mac tool at home, WCC Chinese Dictionary is capable of helping anyone learn the Chinese language.