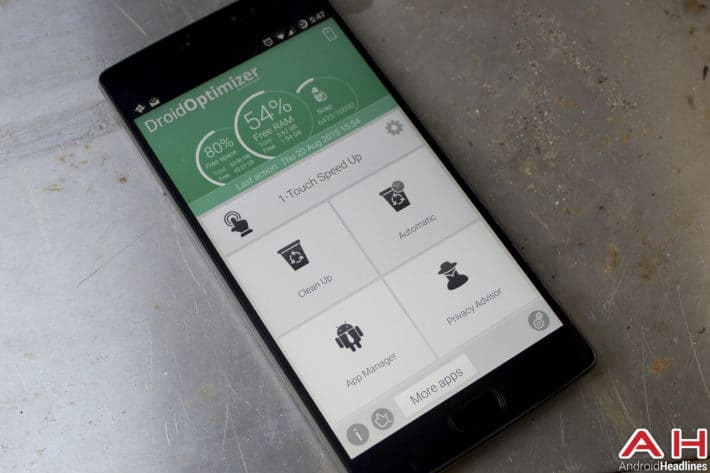 Most devices nowadays are packed with tons of RAM and processing power, and while some phones may ship with lots of internal storage space you'll often find the ones that don't at least allow you to expand the available storage via a microSD card.  With all this room to move about things can get a little cluttered and messy, and that device that you once thought was blazing fast can get bogged down quickly.  While there are tons of different apps out there attempting to help you with the task of cleaning up your phone, some apps cost money while others rely on ads to get the revenue job done.  Even still some apps only do a few things at a time, maybe just cleaning up your RAM or helping you organize your file storage a little better.  Droid Optimizer combines a number of these tasks into a completely free package, one that doesn't include ads or any sort of payment, and better yet one that doesn't feature any suspicious app permissions either.  Check it out on the Play Store here, and while you're downloading we'll give you an explanation of how things work.

When you first start Droid Optimizer the app lets you know exactly what it does and how to use it.  The descriptions provided are easy to understand, and the interface that follows is just the same way.  Prominently featured at the top of the screen are gauges that show free disk space, free RAM and your status in the app.  Clicking on the free space will enlarge the graph for easier reading, while clicking on the free RAM graph will bring up a visual list of all apps currently running.  This is broken down into use apps and system apps categories, letting you know the difference between built-in apps (system apps) and apps you've installed from the Play Store (user apps).  The last gauge is a status gauge and is broken down into different trophies, starting with a broom and working its way up to bigger and badder cleaning tools.  Think of these like achievements on an Xbox or something similar and you'll get the idea.

Below that the there's a ticker that tells you when the last action in the app was completed (helpful for knowing that the automated tasks are working), as well as a few buttons below with the main sections of the app.  It's these sections that make up the meat of the services provided here.  If you're looking for a quick 1-click fix for speeding up your device just click the well-labeled button and it carries out common cleaning tasks like freeing up RAM for apps not currently active, clearing cache and browsing history.  This 1-click fix is customizable so if you only want it to clear cache or browsing history you can adjust it via the cog to the right of the button.  You can also whitelist apps that should never be killed, like Chrome for instance where you may want to keep it running so tabs don't have to keep reloading when you open the app.

The Clean Up section gives you more manual control over tasks such as cleaning cache or browsing history and stopping background apps.  Running out of space on the phone?  Run the Junk Finder tool and Droid Optimizer quickly scans the phone in a matter of seconds and identifies all the files associated as possible junk on the phone.  This is done via a file size rule that can be changed before running the scan, and the results are all sorted into neat little categories with the icon of any app associated with the offending large files.  This really is particularly nice because it's not always easy identifying exactly why apps are taking up so much space, and this lets you manage that space on a per-file basis.  Auto Start Manager picks up where some manufacturers left off, allowing you to decide what apps start with the phone and which ones aren't allowed.

Auto Cleanup lets you schedule when you'd like to run certain cleaning tasks, while Good Night Scheduler will turn off WiFi at night to save battery if you're not plugging the phone in to charge.  App Manager is a quick and easy way to see all the apps you've got installed, as well as the sized for each, permissions the apps are requesting to have and even services the apps are running on the phone.  There's a quick way to run or delete the apps here too if needed, so if you can't remember what a certain app does you can quickly run it to check and delete if it's unnecessary to keep.

Lastly might be the best part of the app for users who are new to Android or just don't know what all those permissions mean on the Play Store.  When installing an app via the Google Play Store a dialog box pops up letting users know what permissions the app is going to have once installed.  Using Droid Optimizer you can peruse each app installed on your phone in a neatly categorized order, with explanations of each permission.  The app will also identify other apps that have suspect permissions such as reading contacts or finding your precise GPS location.  While some apps require these things, other apps may use them for nefarious purposes.

The app itself is visually appealing enough, with clean lines and colors present throughout.  The interface is simple to use and is common enough among other apps out there, although it doesn't use a Material Design language as Google suggests.  Some users may find this annoying, but the app isn't ugly by any means necessary.  The app is also super fast and doesn't take up much space on the phone or hog RAM, something that's pretty important for an app claiming to speed up your device.  I found this to be particularly useful in identifying rogue apps with odd permissions as well as helping to clean off all that room I've got on my phone, a problem that many likely have.

It's hard to say no for the price (free), so why not give this little management app a shot?  Even if you're not interested in the RAM management aspect of it, the permissions checker for apps is worth the time spent to use it alone, not to mention the easy ability to find files that are taking up lots of room on your phone.  The best part about the app size management is that it's on a per-file basis, letting you whittle down the size of many apps without having to completely clear all data from one.  Check it out at the Play Store link below!