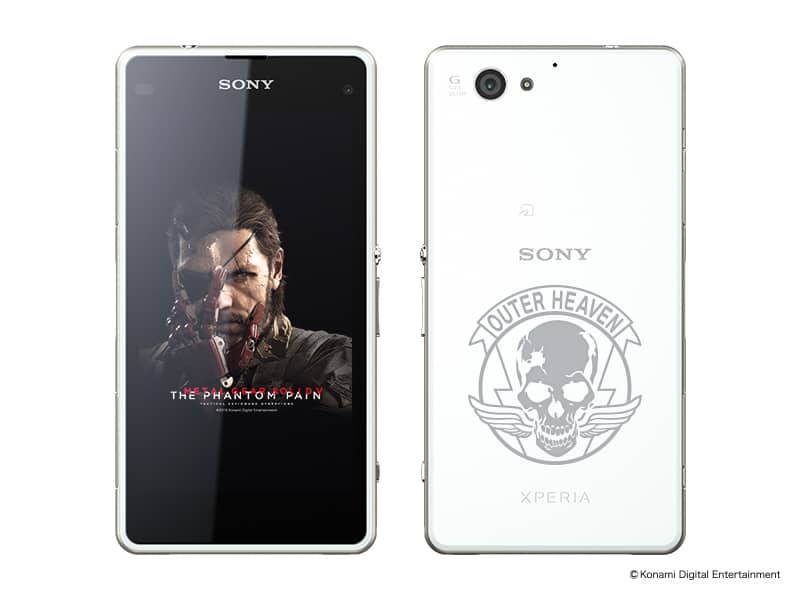 Sony is more largely recognized for their PlayStation video game platform than they are for their mobile phones, but unbeknownst to many people Sony actually has quite a lineup of mobile devices including smartphones and tablets. Recently included in their lineup is a device which shows their passion not only for the mobile space but also for games, as they've just announced a special edition of the Xperia J1 Compact in Japan that's set to launch on September 2nd in the region. Those who are fans of the Metal Gear Solid series will immediately recognize the design of Sony's new Metal Gear Solid V: The Phantom Pain Edition Xperia J1 Compact.

This is in almost every way similar to the original Xperia J1 Compact which Sony already has available for consumers, but it comes with a special etched design on the back of the Outer Heaven insignia (a group in the game) alongside a few special additions like a MGSV ringtone and a collection of specialized wallpapers themed from the game. If September 2nd sounds like a familiar date, that's because it's a day before the official release date for MGSV: The Phantom Pain which is due to hit Sony's PlayStation 4 along with other platforms.

This special edition device also comes with a limited edition artbook preinstalled which can be accessed from the File Commander app on the phone in PDF format, featuring the complete artbook from MGSV. Sony is including other special little gifts here for fans of the series, like a voucher worth 1,000 yen that's good towards the purchase of Metal Gear Solid comics, as well as two game soundtracks: Sins of The Father, and Quiet's Theme. As far as official hardware specs, everything is the same as the original Xperia J1 Compact which is equipped with a 4.3-inch 720p display, a Qualcomm Snapdragon 800 processor, 2GB of RAM and 16GB of internal storage that can be expanded via the microSD. It also comes with a 2,300mAh battery and sports Sony's 20.7MP rear-facing camera and a 2.2MP front-facing camera for selfies and video chat. The device will end up costing 59,800 yen, but this is likely only a Japan only release.