Xiaomi just can’t stop releasing devices this year, the company has already released a ton of new handsets since January, including the Mi Note, Mi Note Pro, Redmi 2, Redmi 2A, Redmi Note 2… etc. Xiaomi has also released the Mi 4i earlier this year, the first Xiaomi-branded smartphone which launched in India before anywhere else. This is a mid-range smartphone which is extremely affordable at the same time. The phone is currently available in parts of Asia, and it seems like Xiaomi is working on a more powerful Mi 4i model, read on.

A couple of days ago, we’ve reported that a new variant of the Mi 4i was spotted at TENAA (China’s equivalent to the FCC), the Mi 4C. Unfortunately, we didn’t get to see its specs back then, but thanks to the AnTuTu listing we’re here to talk about today, that’s about to change. The Xiaomi Mi 4C popped up on AnTuTu and showed off its specifications. The specs are exactly what we thought they’ll be, for all intents and purposes, this is the Snapdragon 808-powered Mi 4i handset. The rest of Mi 4C’s specs seem identical to the Mi 4i’s specs, at least the ones listed on AnTuTu.

According to AnTuTu, the Mi 4C will sport a 5-inch 1080p (1920 x 1080) display, along with 2GB of RAM and 16GB of internal storage. Qualcomm’s Snapdragon 808 64-bit hexa-core SoC (MSM8992) will fuel this smartphone, the very same processor you’ll find in the LG G4 and the Moto X Style. The 13-megapixel camera will be available on the back of this smartphone, and a 5-megapixel shooter will be located up front it seems. Android 5.1.1 Lollipop will come pre-installed on this device, and I guess we can expect Xiaomi’s newly-announced MIUI 7 OS to come pre-installed on it (Android 5.1.1 Lollipop is a dead giveaway in this case).

According to the currently-available information, the Mi 4C is a Chinese variant of the device. The ‘C’ in its name seems to be a symbol for China, well, at least to what we’ve seen thus far. Anyhow, we’ll report back as soon as we stumble upon more details about this device. 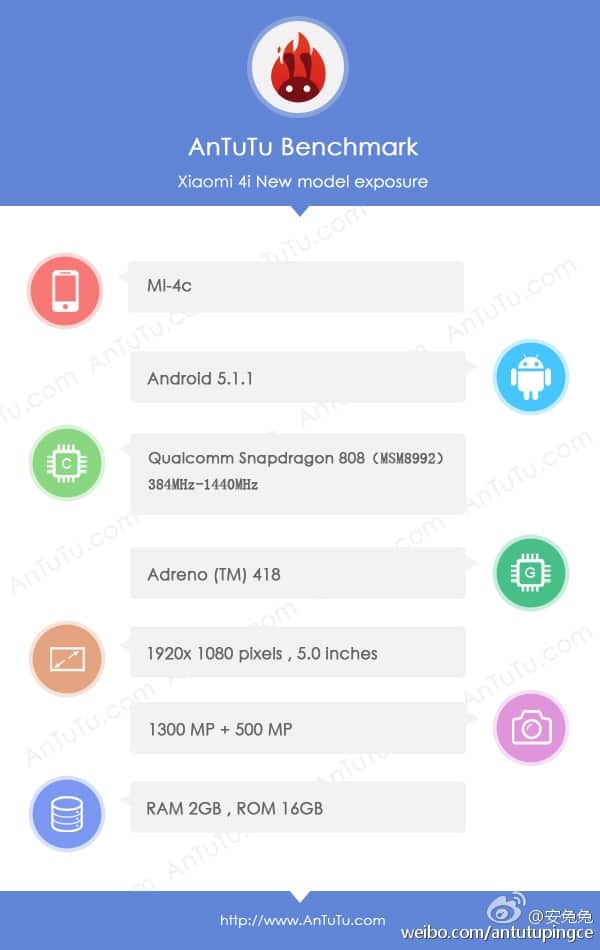