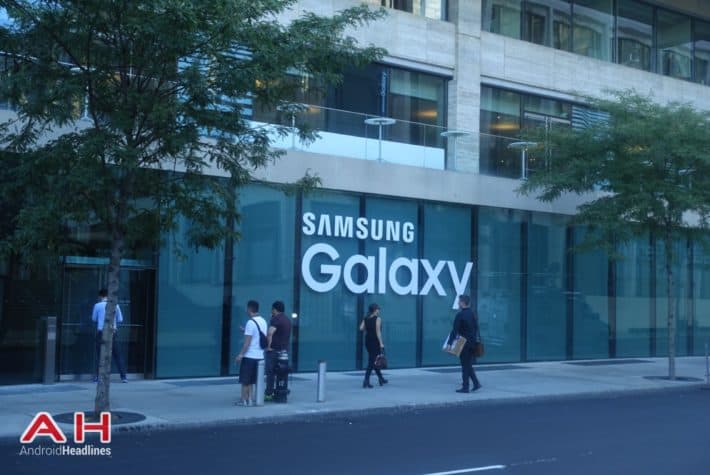 Samsung's Unpacked event is finally here and that means the company is expected to finally unveil their two latest phones, the flagship Galaxy Note 5 and the highly anticipated Galaxy S6 Edge+. Both phones are slated to bring some nice improvements to the table: the Galaxy S6 Edge+ with a slightly larger display than the original model and the Galaxy Note 5 with it's updated body design carrying a sleek metal frame and all glass back. We'll be covering the event live as it happens in New York, so follow here as Samsung unwraps every last detail.

Unpacked is beginning, and Samsung Electronics CEO JK Shin is taking the stage. Currently Shin is discussing the different elements of Note series devices and what made them such an impactful set of devices. Samsung states they continue to improve and evolve with the devices by "staying ahead of the curve" which is a subtle yest obvious play to the new metal and glass design of the Galaxy Note 5, accompanied by an image of the phone's corner.

Shin has officially announced the Galaxy S6 Edge+ and the Galaxy Note 5, and is now showing them off on screen. After tons of leaks the designs are exactly as people expected, with sleek curves and stylish metal and glass finish. Samsung has announced that the screens are bigger than past devices but that the phones are actually smaller. They have also just announced that Samsung Pay is launching.

Now Justin Denison is on stage talking about the Note series. Discussing how each Note device has been more popular than the last. "Bigger screens have gone from nice to have, to must have" Denison states.

Samsung has set out to design a phone with a big display yet smaller phone body so consumers no longer have to make compromises. The metal they used is even stronger than on the Galaxy S6. It';s also thinner and lighter, and the glass on the back of the Note 5 has been curved to better fit in the hand.

Denison states the new S Pen is better than ever and is more precise. There is also indeed a mechanism built-in to pop the S Pen right out to make it easier to use.

Icons hover for instant access to all your tools whenever you have the S Pen out. S Pen screen capture has also been improved, allowing for captures of long lists like directions in one tap. Ease of use, no hassle.

Samsung is now showing off the keyboard cover that we saw in leaks just last week.

Now Cotton is talking about the LevelOn Wireless Pro headphones.

Cotton is discussing a feature called "Live Broadcasts" allowing users to broadcast directly from their phone to YouTube.

Denison is now back on stage to talk more about the Galaxy Note 5 and Galaxy S6 Edge+. The displays are 5.7-inch Quad HD Super AMOLED panels, which was mostly expected, but now confirmed.

Both phones also come with 4GB of RAM to keep up with everything consumers need to do on a daily basis. "These phones are crazy powerful."

Both phones are equipped to be ready for Cat 9 LTE speeds.

Both phones are capable of shooting video in 4K resolution. They have also improved the software based image stabilizer to help with stabilizing the recordings for clearer videos using their tech called VDIS + OIS.

Samsung is bringing fast charging capabilities to wireless charging so you can charge back up without wires quickly. Stating you can go from empty to full in just two hours, an improvement Denison states is up to 30% better than before.

Both new phones come with built-in fast wireless charging capabilities, which was already kind of obvious by the above-stated comments.

Both phones will be available in stores in the U.S. and Canada on August 21st officially. U.S. pre-orders also start today at 3pm.

Injong Rhee is now on stage talking about Samsung Pay. He states that Samsung Pay is "simple, safe, open, and fun to use."

He states that existing solutions have limited availability.

Samsung Pay will work with almost all Magstripe card readers, NFC, and barcode readers, and Rhee states that it will be accepted almost anywhere.

Rhee states that if retailers can swipe a card they can most likely take Samsung Pay. He also states that they partnered with MasterCard, VISA, AMEX, US Bank, Chase Bank, and Citi Bank just to name a few options, and that they work with plenty of retail store gift cards.

Rhee is now discussing Samsung KNOX, their security solution which helps to give consumers "peace of mind" when using Samsung Pay. Each transaction uses a one-time security code so information is never stored.

Consumers will be able to use Samsung Pay in Korea beginning August 20th and in the U.S. on September 28th, with other countries following in the near future.

Alanna Cotton is now back on stage. Samsung is now showing off the a round smartwatch, as Cotton states that "what's next is just around the corner." "stay tuned for more information in Berlin." she states, which is where they'll likely unveil the watch we just caught a glimpse of officially when IFA begins.