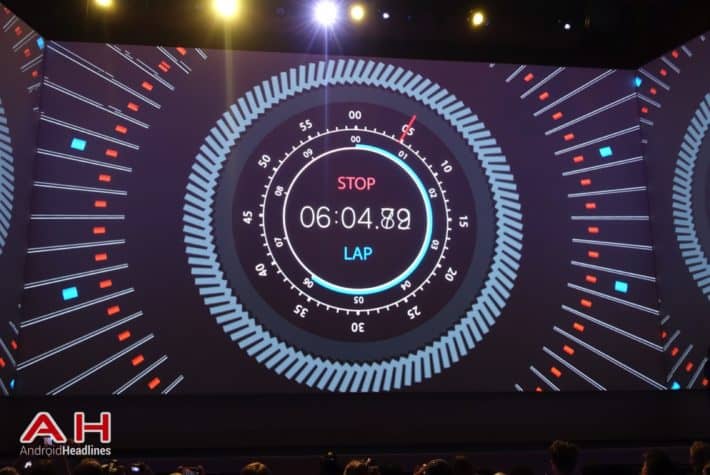 Earlier today, Samsung took to the stage during Unpacked events in both New York as well as London to announced the new Galaxy Note 5 and Galaxy S6 Edge+. During the event, the two devices were announced with little surprise; we knew what was coming, but Samsung bringing back the BlackBerry Keyboard was something of a surprise to us all. Either way, the Galaxy Note 5 and Galaxy S6 Edge+ are both official and depending on where you are you can pre-order them today and they'll be available starting August 21st. One thing that we didn't see was their new round smartwatch that we've been seeing a lot more of recently, that's because it's coming during IFA, held next month in Berlin.

Right at the end of their Unpacked event in New York, Samsung threw out a quick, "blink and you'll miss it" teaser for the next Samsung smartwatch. The fresh UI and round elements were featured heavily during the few seconds it was on display and it appears Samsung is going after the Apple Watch here. The watch faces displayed quickly seemed to resemble those used on the Apple Watch, but Samsung will be going after the market looking for a smartwatch that looks like a watch. One that is round and stylish to wear on the wrist. We got a quick glimpse of it, and it looks like Samsung will be offering up metallic smartphone with a round display, not unlike we previously thought.

Samsung didn't announce any concrete plans during the event today, but they did show a slide of Berlin display on the watch's display. It was far from subtle, and it gave us a good idea of what to look out for next month. We'll be at IFA 2015, so we'll have all of the information as soon as we have it, including when and where you'll be able to get your hands on the latest smartwatch from Samsung. A possible Gear S2? A whole new line of devices? Who knows, but we're excited for what's next, are you?