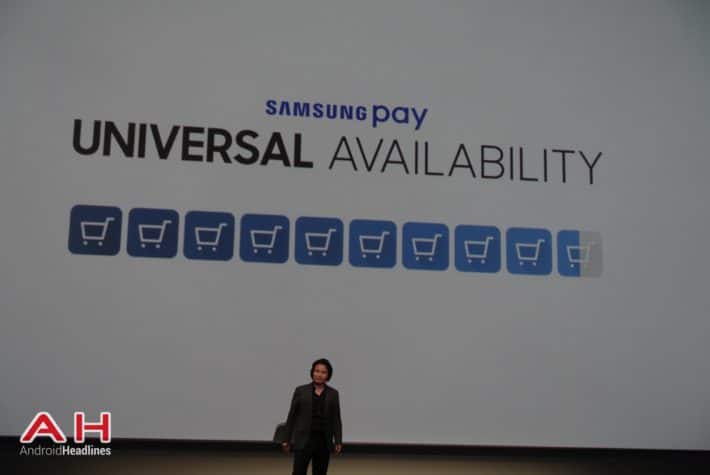 Samsung Pay has yet to launch in the US, but it should be available in September. At Unpacked earlier this month, the company announced that their mobile payment system would be launching in South Korea on August 21st, the same day that the Galaxy Note 5 and Galaxy S6 Edge+ were launching worldwide. In the first five days since its launch in South Korea, there have been 80,000 credit cards registered on Samsung Pay in just the first 5 days. What makes that number sound even bigger, is that is just one country. South Korea.

According to a report out of Business Korea, the credit card industry appears to be excited about the early adoption on Samsung Pay, and calls it "encouraging". Experts are also saying that the early success of Samsung pay lies in its "ease of use". Unlike Android Pay, Google Wallet and Apple Pay, Samsung Pay does not use NFC. Instead it uses magnetic secure transmission or MST for short. This was the main reason that they bought LoopPay earlier this year, to get a foot into the mobile payment game, even a leg up on their competitors. It's a great way to do mobile payments because it means that merchants do not need to replace their terminals with NFC terminals. Like they had to do with Google Wallet, and now Apple Pay and Android Pay.

The early success of Samsung Pay is encouraging, not only for the credit card industry, but also for mainstream adoption. Google Wallet has been doing mobile payments for years, but never really saw any real success. In fact, many people didn't even know it was possible to pay with your smartphone. And a lot of merchants would think you were hacking their terminal. With Samsung Pay being so easy to use, and merchants not needing to spend money on new terminals, it should go mainstream pretty quickly. However, with Apple doing their own mobile payment service, we could see Android Pay also getting traction very quickly. Mobile payments is the future, and it looks like Apple and Samsung are leading the way.