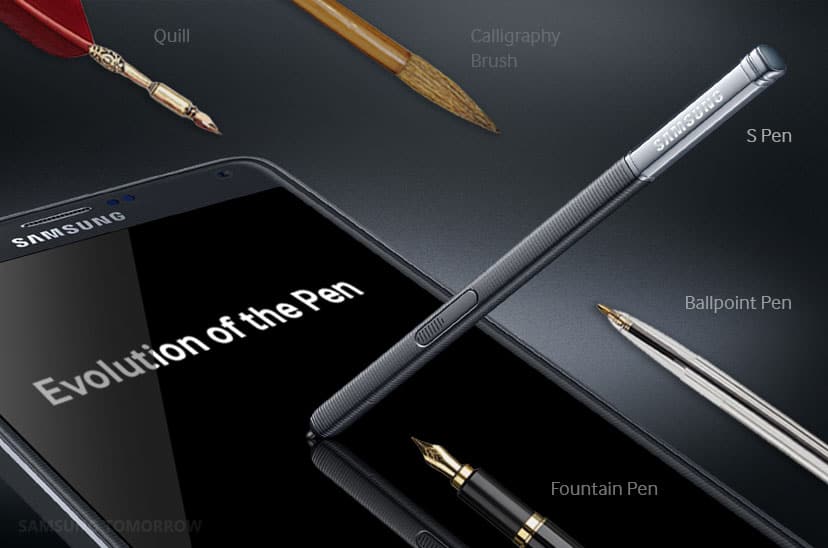 Samsung's Galaxy Note 5, or rather perhaps it's more accurate to simply say "Unpacked," event (since Samsung hasn't officially stated the Galaxy Note 5 will be unveiled) is coming up on August 13th, and without any official confirmations from Samsung that we'll see the Galaxy Note 5 unwrapped in front of the world, they're placing some rather subtle hints about what's to come. Their event invitation images showed off the outline of what looked like a Note device face down, and as of today it seems they're teasing users about a "new and improved S Pen" albeit without stating as such in those exact words directly.

Many have already speculated that Samsung would have some tricks up its sleeves for an S Pen with some updated functionality or new features, and even if they don't end up being vast changes, it's clear that Samsung has some plans to enhance the S Pen in certain ways. Samsung leads into their tease by talking about how pens have evolved over the years and how they've shaped the way we communicate through written word. Naturally, in their description of how the pen has evolved and improved through time, Samsung states that the S Pen has done so in much the same way and is perhaps the "most technologically advanced pen of all time." Whatever your opinion is on that particular statement, one can't argue the S Pen has some pretty advanced and useful features.

What will the next S Pen include that the fourth iteration does not? That still remains a mystery and likely will until Samsung is ready to reveal the Galaxy Note 5. Luckily for those who are interested in the next Galaxy Note device, that date shouldn't be too far off. Among an improved S Pen likely with some new functions, the Galaxy Note 5 should also sport a new striking design modeled after the Galaxy S6 with a sleek metal frame and glass back, which also means an enclosed design with a non-removable battery. It's also rumored to be coming with the same fingerprint sensor we see on the Galaxy S6 and the Galaxy S6 Edge likely launching with Samsung Pay support.