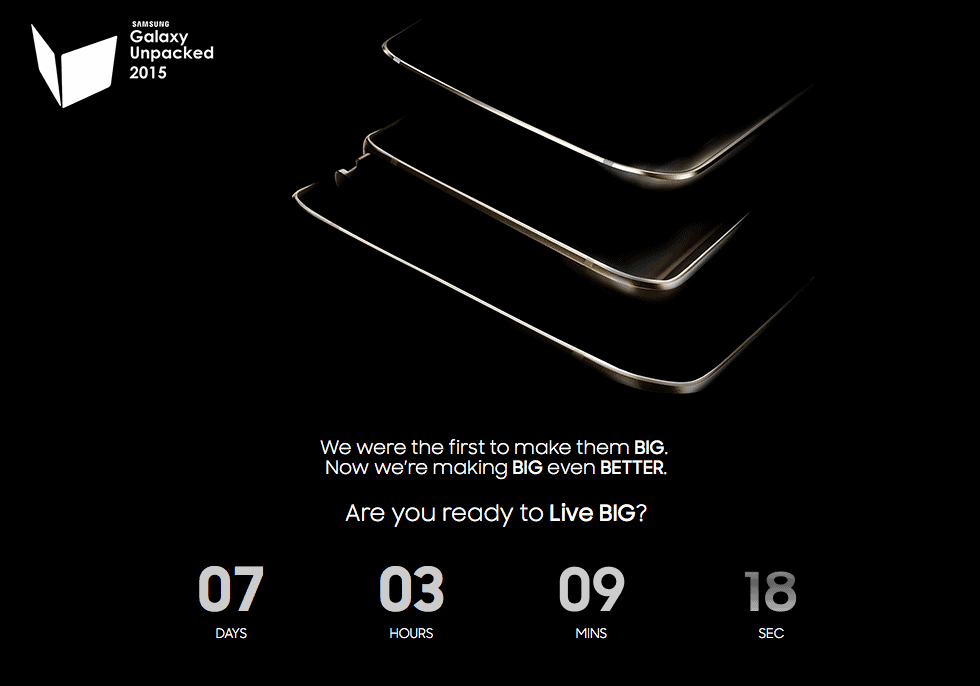 Every time that there's a Samsung event coming up, Samsung seem to kick their hype-machine into overdrive a week or so before the final date. Sure enough, right on cue, Samsung have begun teasing their new devices on their Samsung Philippines site. With the tagline of 'We were the first to make them big. Now we're making big even better.' it's clear that Samsung is talking about at least a Galaxy Note 5 launch, referring to the original Galaxy Note launching as one of the largest smartphones on the market just a few years ago. There are however, what looks like three devices teased in their countdown graphic.

Making out much from these silhouettes is difficult, but it looks to us to be three metallic edges of three devices. Each one looks a little larger than the one before it, and if we had to take a guess, we'd say that the top device was the Galaxy S6 Edge+, rumored to have a 5.5-inch display, with the device underneath being the Galaxy Note 5 and its rumored 5.7-inch display. That leaves one more device that we have no idea about. It's possible that this is some sort of tablet, but considering Samsung has already launched the Galaxy Tab S2 pair of devices, we wonder what this could be. If they're launching a larger Galaxy S6 Edge, then they might also be bringing the Edge brand and curved displays to a tablet of some sort. Which wouldn't be too bad an idea, especially considering tablet sales have been pretty dismal for everyone this past year.

Regardless of what they're launching, it seems like Samsung has something a little special in store for us. Either way, we'll be there with all of the news as we have it, and it already looks like a new Galaxy Note and a larger Galaxy S6 Edge are on their way. What this third device could be is anyone's guess, and there's of course the possibility that Samsung is looking to make fools out of us all. You can take a look at the countdown at the source below and while it's nothing exciting, it does go a long way to confirming new smartphones at the very least.