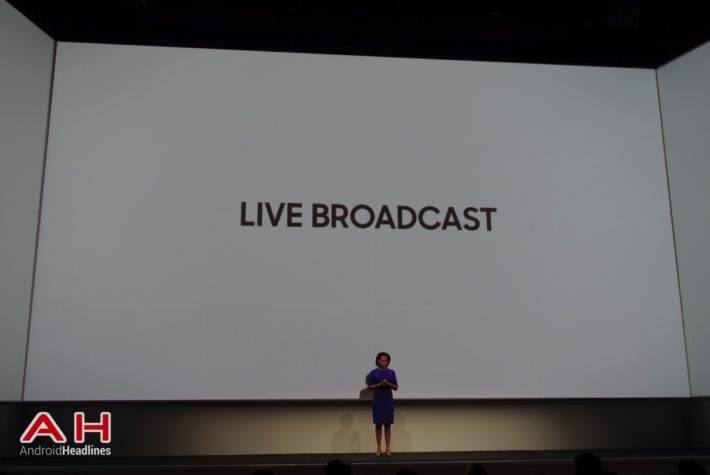 At Unpacked yesterday, Samsung announced a new feature on the Galaxy Note 5 and Galaxy S6 Edge+ that a lot of YouTubers were drooling over. And that is the fact that you can broadcast live straight from your phone to YouTube, Samsung is dubbing it 'Live Broadcast'. Now this might sound familiar, because it's basically what Periscope and Meerkat have found success in. In fact, Periscope just recently announced 10 million users – although only about 2 million are active – but the fact that you can quickly be live in front of thousands of people (depending on how popular you are, obviously). Live Broadcast appears to be a direct competitor to those two apps, and might even do it better. Simply because it's streaming on YouTube. And YouTube is the biggest video sharing network around. Not that you didn't already know that.

We got a demo of Live Broadcast yesterday in NYC at Unpacked, and it seemed to work quite well. However this was also in a controlled environment, so we'll have to wait and see how well it works in the real world when the two devices launch next Friday. Similar to Periscope, Live Broadcast is going to be using up quite a bit of data. Seeing as you're live streaming video, obviously that's going to use a decent amount of data.

So now with the Galaxy Note 5 and Galaxy S6 Edge+, users will be able to jump into the camera app and be live on YouTube in just a few minutes. It's a pretty cool feature, and it's going to be pretty popular as long as it works well. Just look at Periscope's success. And it's likely that more people have a YouTube account over a Twitter account. Which is going to make discovery much easier and simpler for those looking to grow their audience.

It was a bit interesting to see Samsung cooperating with Google on this. In the past, Samsung has typically created their own services that basically duplicated what Google offered. It's pretty obvious that Google had a hand in Live Broadcast, and it should be a pretty popular feature of Samsung's two new smartphones announced yesterday in New York City.