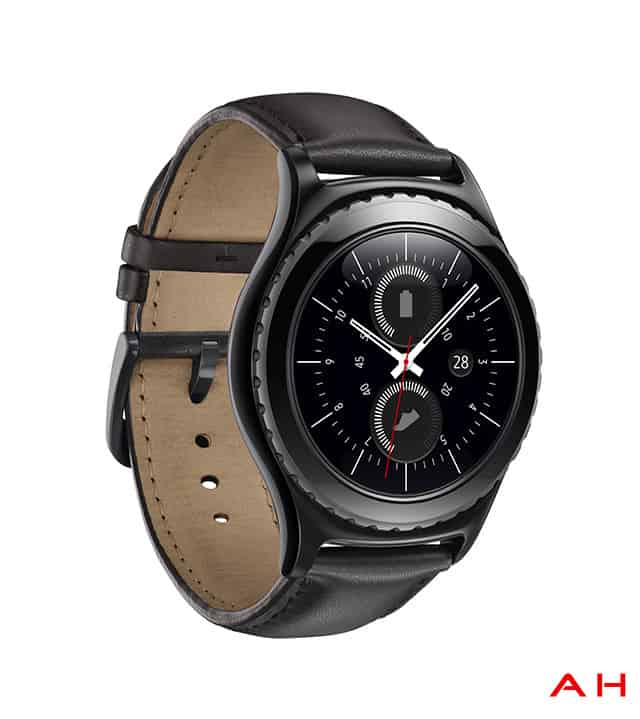 Ahead of IFA, Samsung has just announced their highly rumored latest smartwatch and have now confirmed much of the details including that there are three versions on offer. The first two are the recently rumored Samsung Gear S2 and Gear S2 Classic, while the third version is the also recently rumored 3G standalone option. Essentially, there is very little difference between the Gear S2 and S2 Classic, with Samsung confirming that the Classic will be more aesthetically aimed towards those who prefer a more "timeless" look and feel. As such, the Gear S2 Classic will be available in black with a black leather band, while the standard Gear S2 will come sporting two color variants, dark gray with a gray band and silver with a white band.

In terms of the specs, Samsung have now confirmed that the Gear S2 and Gear S2 Classic both come equipped with a 1.2-inch Circular Super AMOLED display along with a 360 x 360 resolution and a 302 ppi. Inside, both variants come equipped with 512 MB RAM and powered by a dual-core processor (clocking at 1.0 GHz). Internal storage is set at 4GB, while they both are also IP68 certified for dust and water Resistance. In terms of connectivity, both versions are compatible with Wi-Fi 802.11 b/g/n, Bluetooth 4.1 and NFC. Moving to the battery side of things and Samsung has confirmed that the Gear S2 and S2 Classic both come with a 250 mAh Li-ion battery, which is capable of wireless charging. While as to be expected, the operating system in play on both variants is Tizen. There is a ton of features included in both and and likewise, both come spotting numerous sensors including Accelerometer, Gyroscope, Heart Rate, Ambient Light, Barometer. Physically, is one of the main differences between the Gear S2 and Gear S2 Classic, with the standard Gear S2 measuring 42.3 x 49.8 x 11.4 mm and weighing 47g. In contrast, the Gear S2 Classic is slightly smaller and lighter, measuring 39.9 x 43.6 x 11.4 mm and weighing 42g

In terms of the 3G version, this includes almost identical specs to the standard Gear S and S2 Classic. That is, with the exception of the 3G version coming equipped with its own cellular connectivity and what Samsung refer to as "the first-ever e-SIM with voice capability." In addition, the 3G version also comes with a slightly increased 300 mAh battery capacity and measures 44.0 x 51.8 x 13.4 mm and weighs a heavier 51g. Samsung have once again confirmed that the Gear S2 and S2 Classic will both be on show at IFA, unfortunately though, today's announcement did not include any details on the likely pricing or availability of any of the variants.