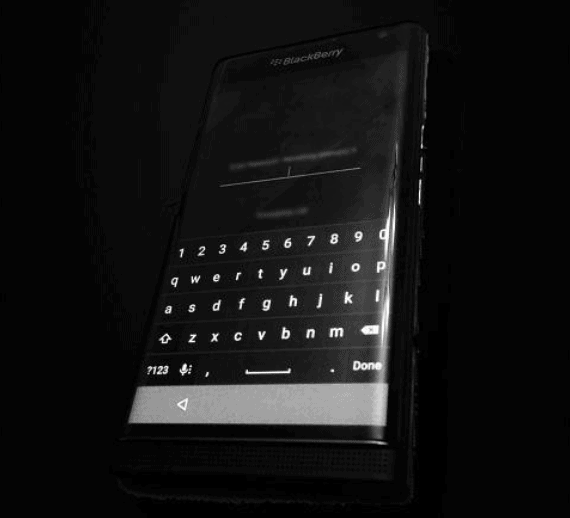 Blackberry has long been rumored to bring an Android smartphone to the market this year in an effort to stay relevant in the increasingly bipolar world of mobile operating systems. With Symbian and Bada already breathing their last and Sailfish and Firefox struggling to gain traction, Windows is the only other platform that still has some amount of users left in a category completely dominated by Google's Android and Apple's iOS. In recent times we have seen multiple renders and read about some of the rumored hardware specs on Blackberry's upcoming Android device, which was showed off earlier at this year's Mobile World Congress held in Barcelona. The smartphone is said to have a codename of 'Venice' and BlackBerry is reportedly getting ready to launch the device in the month of November.

On Friday, a poster going by the username Mikey_NNG posted a purported image of the upcoming phone on the forums of BlackBerry enthusiast site CrackBerry. The low-resolution image shows off the virtual keyboard on the device. Of course, the phone will include the trademark BlackBerry physical QWERTY keyboard that will come in the form of a slider, which will be a change from the traditional smartphone form factor that most Android and iPhone users have gotten used to over the past half a decade or so. Rumors also suggest that the upcoming device may also have a BB OS variant, which will be powered by BB OS 10.3, and is expected to be launched later this year, as mentioned already. The handset is said to be available at least on two US carriers at launch – AT&T and T-Mobile.

As for what else we've already read and heard about the upcoming BlackBerry Venice, the smartphone is believed to come with curved edges on both sides like the just-announced Galaxy S6 Edge+, have front-facing speakers like HTC's flagship One models, and is said to feature a 5.4-inch QHD (2560 x 1440) display. The handset is said to be powered by a Qualcomm Snapdragon 808 chipset, which has an octa-core processor clocked at a maximum of 1.8 GHz and an Adreno 418 GPU. The smartphone is also said to come with 3 GB of RAM along with an 18-megapixel primary camera and a 5-megapixel front-facing camera.