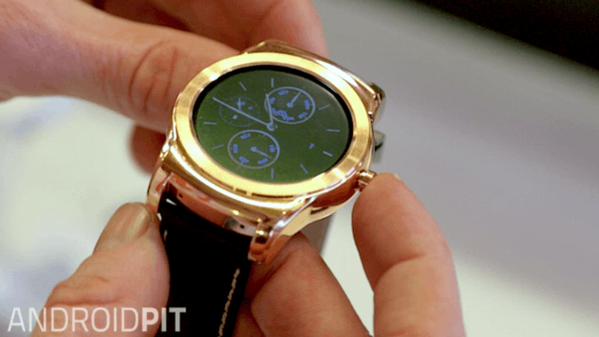 Citing a 'trusted source', Android Pit is reporting that South Korean consumer electronics giant LG is about to launch a premium edition of its Watch Urbane, built with pure 23-carat gold. The smartwatch, which is said to be unveiled at the upcoming IFA trade show in Berlin, will reportedly feature a wristband made out of genuine alligator leather and carry a $1,200 price-tag. That price may seem rather steep for a smartwatch, but will still make the device significantly cheaper than Apple's premium wristwatches made out of 18-carat gold, which cost in excess of $10,000. According to the report, the gold edition of the Watch Urbane will initially be available only in the US "through a select jewelry partner", although it will most likely be released elsewhere at a later date. There is however, no indication currently, as to who the mystery jewelry partner might be. The report also reveals that the device will be available online as well, although, it wasn't immediately clear whether shipping will be restricted to US addresses only.

LG announced its Watch Urbane earlier this year at a price-tag of $350 in the US. Powered by Android Wear, the device is the South Korean company's third generation follow-up to its G Watch and G Watch R, which were released in the two previous years. While the smartwatch market hasn't yet caught on with mainstream consumers as much as smartphones or even tablets for that matter, manufacturers aren't shying away from introducing newer – and pricier – gadgets in the market. While Apple's 'premium' smartwatches have faced criticisms from various sectors on account of their looks, functionality and pricing, LG seems to be taking a shot at entering the leagues of 'premium' watchmakers with its latest offering. It remains to be seen how the upcoming 23-carat gold device is received by the would-be premium smartwatch buyer, especially seeing as traditional high-end watch maker Tag Heuer is said to be prepping the launch of its Carrera Wearable 01 smartwatch later this year at a $1,400 price-tag.

As a quick recap about what the Watch Urbane brings to the table on the hardware side of things, the device comes with a 1.3-inch P-OLED Display with a resolution of 320 x 320. The smartwatch is powered by a Qualcomm Snapdragon 400 SoC, which includes a quad-core processor clocked at 1.2GHz. It has 512 MB RAM and 4GB eMMC storage. The smartwatch measures 45.5 x 52.2 x 10.9 mm and comes with a 410 mAh battery. Sensors include a 9-Axis (Gyroscope, Accelerometer, Compass), Barometer, and PPG (heart rate monitor) and it comes with an IP67 rating for water and dust resistance.