Do we have a good one for you today – the new and sexy Samsung Galaxy S6 goes up against the new and sophisticated Motorola Moto X (Pure Edition in the US and Style outside the US).  Two flagships from two of the most exciting manufacturers we have pumping out high-quality smartphones today.  Samsung needed a completely new design and hit us with a glass and metal device that belies its beauty.  Motorola just needed to refine and upscale its current Moto X and that is exactly what they accomplished, and they did it all within a $400 price tag.

These two devices do share a few items with each other – starting with the size.  The Moto X is slightly larger, but not much considering it has about a one-half inch larger display – 5.7-inch versus 5.1-inch on the Galaxy S6.  Both devices use the QHD display with a resolution of 2560 x 1440 pixels, with the S6 coming in at 576 pixels-per-inch (PPI) and the Moto X coming in at 520 PPI.  Both come to us with 3GB of RAM and either 16/32/64 GB (Moto X) or 32/64/128 GB (S6) of internal memory – but we must point out that the Galaxy S6 uses faster DDR4 RAM and UFS 2.0 flash memory, while the Moto X has room to expand via a MicroSD card slot.  Although they use different size batteries, both devices are of the  non-removable variety.

All the usual suspects are there – Wi-Fi, Bluetooth 4.1, GPS, NFC, microUSB 2.0 port for charging and data transfer and both have a quick charge feature. It would be nice if Motorola had included wireless charging like the Galaxy S6. 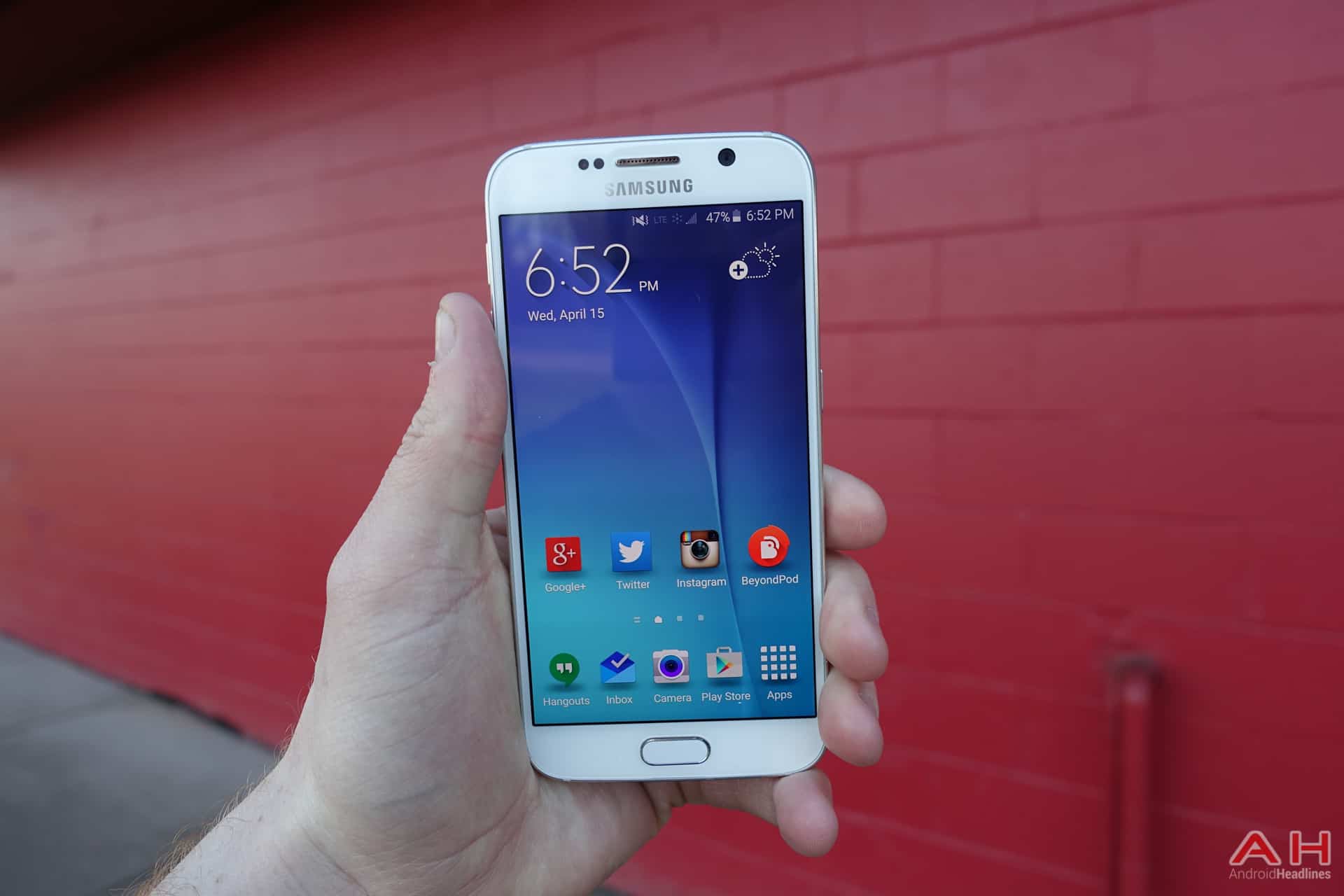 Last year’s Galaxy S5 was a dud in sales as far as a Samsung device goes – it was a solid phone, but failed to excite new buyers.  Samsung really changed their approach in their design of the new Galaxy S6 – no more plastic, instead we have an aluminum unibody with Gorilla Glass 2.5D on the front and Gorilla Glass 3D on the back.  It comes in a variety of colors, such as White Pearl, Black Sapphire, Gold Platinum and an exclusive Galaxy S6 color, Blue Topaz.  The Galaxy S6 is beautiful from every angle with a premium feel and solid build.

The Galaxy S6 sports a 5.1-inch Quad HD Super AMOLED display with a resolution of 2560 x 1440 pixels and 576 PPI and this compares to Moto X’s QHD 5.7-inch display and 520 PPI.  Samsung made several bold decisions in their new Galaxy S6, and the first was to go with their in-house 64-bit Exynos 7420 octa-core processor.  It has four cores clocked at 1.5GHz and four cores clocked at 2.1GHz.  The Moto X is sporting a new Qualcomm Snapdragon 64-bit 808 hexa-core processor.  The Galaxy S6 is packing 3GB of the much faster DDR4 RAM, compared to 3GB of DDR3 RAM used in the Moto X.  The Galaxy S6 memory options are 32GB, 64GB or 128GB models with the new and faster Samsung UFS 2.0 flash memory offering up with no room for expansion, whereas the Moto X comes with options of 16GB, 32GB and 64GB of internal memory and a microSD card for expansion.

The Galaxy S6 main camera has a 16MP sensor with autofocus, LED Flash, a wide f/1.9 aperture, Live HDR and OIS.  Samsung increased the front-facing camera (FFC) to 5MP and they wisely added the f/1.9 aperture, 120-degree wide-angle and Live HDR for excellent low-light group selfies and video chatting.  The Moto X main camera is a huge 21MP affair and a 5MP FFC…it should take great pictures, but the Galaxy S6 will win a competition.

The non-removable 2550mAh battery is smaller than the non-removable 3000mAh in the Moto X, but it should get you through an entire day with moderate usage.  However, if you run into trouble, the new Samsung battery can charge up to 4 hours of usage in only 10 minutes and they included built-in wireless charging.  The Moto X also provides a quick charge feature as well.

The Galaxy S6 has a few features not found on the Moto X – it has it is Samsung Pay ready, it has a fingerprint sensor is PayPal certified, includes a heart rate monitor, an oxygen saturation sensor and wireless charging for both Qi and PMA standards.  It is running Android 5.1.1 Lollipop and will cost you about $200 on a two-year contract and $60o – $700 off-contract for the 32GB model. 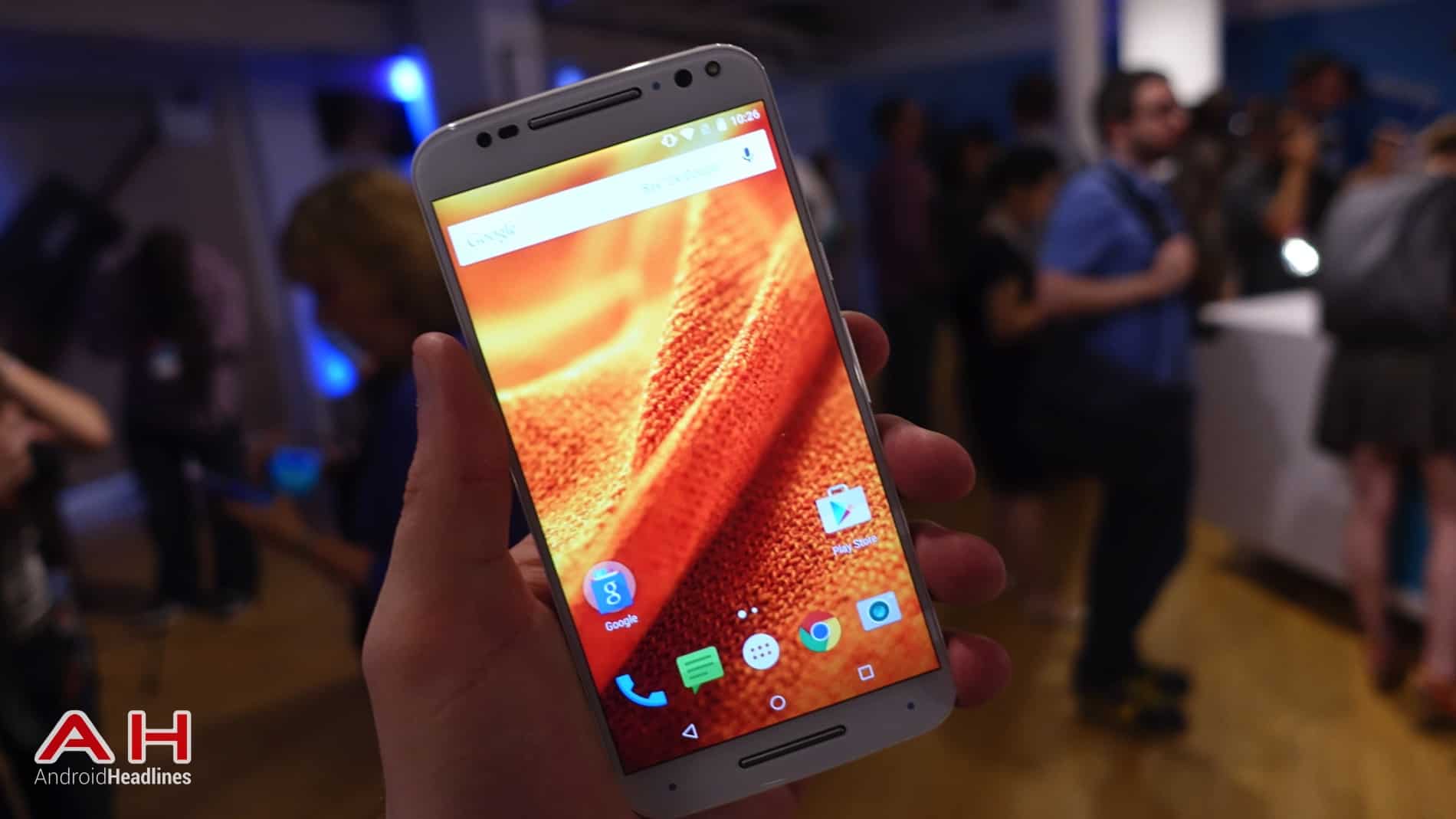 This year Motorola has redefined their flagship Moto X device for 2015.  In the US they are calling it the Moto X Pure Edition and outside the US it is called the Moto X Style.  The new Moto X is improved in just about every area of its design – larger display, more pixels, better camera, 64-bit processor and more memory.  They are many ways to customize and personalize the look of the new Moto X – colored backings, casings and even the wood backings – and you can further customize its look using the Moto Maker.  It is a larger device, but retains the full-metal frame and curved backing making it comfortable to hold.

On the Moto X, Motorola replaced the AMOLED display for an IPS LCD variety.  It is 5.7-inches with a QHD resolution of 2560 x 1440 pixels and 520 PPI, while the Galaxy S6 uses the same QHD display technology in a 5.1-inch display with 576 PPI.  Motorola decided to stick with Qualcomm and put in their 64-bit Snapdragon 808 hexa-core processor with one quad-core clocked at 1.44GHz and the other dual-core clocked at 1.8GHz.  This goes up against the 64-bit Exynos 7420 octa-core processor in the Galaxy S6.  The Moto X comes with 3GB of RAM and either 16GB/32GB/64GB of internal memory with a microSD card slot to expand.  The Galaxy S6 also has 3GB of RAM, 32GB/64GB/128GB of internal storage, but no means to expand.

Motorola was never known for their cameras, but we saw a glimmer of hope in the Nexus 6 and now with the Moto X they went the extra mile with a 21MP sensor.  The camera is comes with a quick phase detection autofocus, dual-tone LED flash and uses an f/2.0 aperture.  The Moto X even includes a 5MP FFC with an f/2.0 aperture and a wide-angle lens for great selfies and video chatting.  This goes up against an excellent 16MP main camera and a 5MP FFC in the Galaxy S6.  The Moto X uses a 3000mAh battery versus the smaller 2550mAh battery in the Galaxy S6 – non-removable battery in both.  The Moto X can use Motorola’s Turbo Charger for a very quick charge and the S6 also has a fast charge option as well as wireless charging built-in.

The Moto X includes front-facing stereo speakers with Smartboost for a great new sound rather than the one bottom mounted speaker in the S6.  Motorola also includes the IP52 water repellency in the Moto X.  The Moto X is a device that is being sold unlocked and can be used on all major US networks.  With almost a pure Android experience – currently 5.1.1 Lollipop – you can be assured of getting the fastest updates possible.  Motorola has given it a starting price of $399.99 and it will be available this fall. 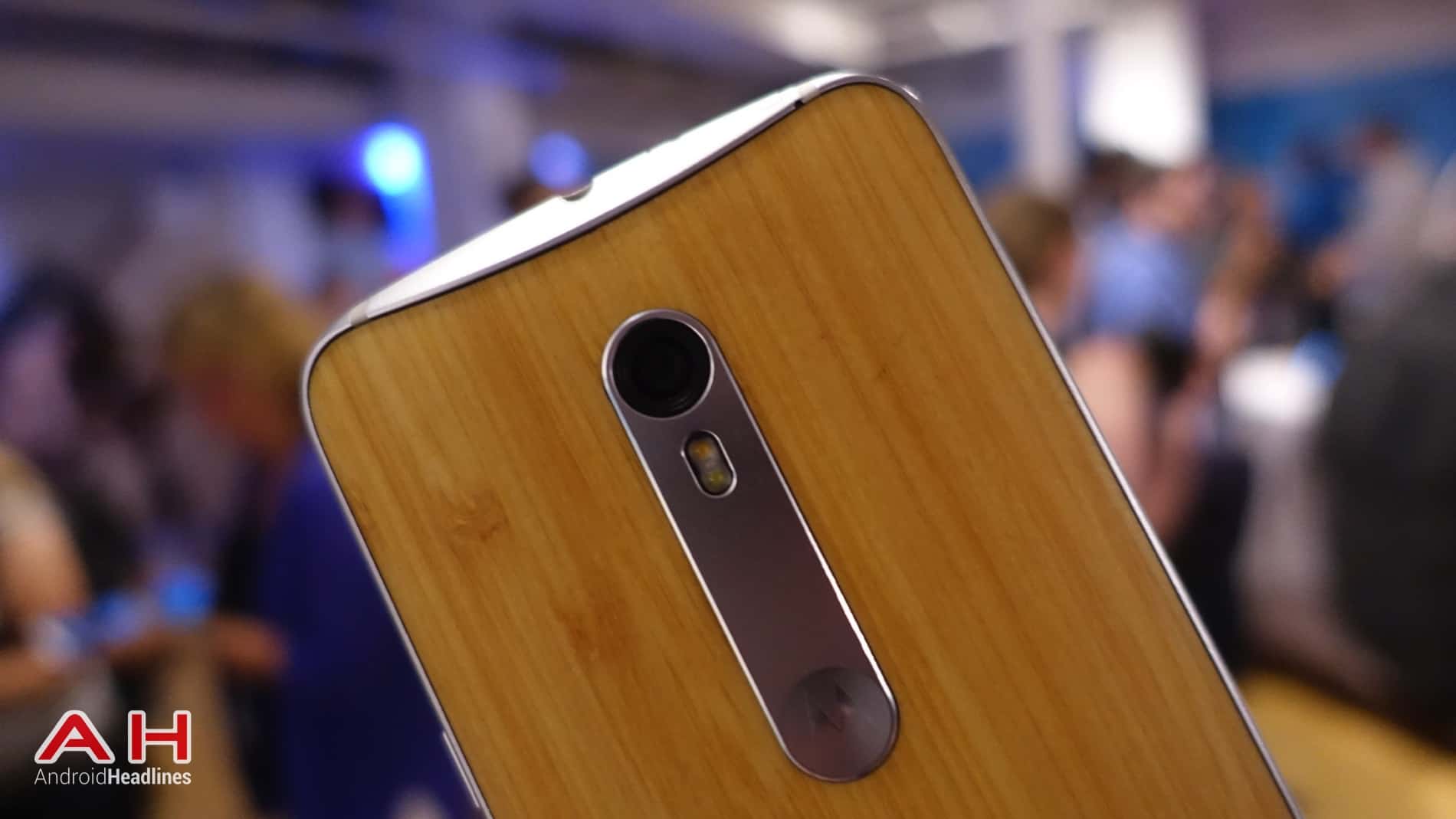 This was a very tough decision as I am very impressed with the Galaxy S6, and make no mistake, it has better specs than the Moto X in every category…okay, the 21MP camera sensor on the Moto X is larger than the 16MP sensor found on the Galaxy S6, but the Galaxy S6 will still take better pictures.  If that is the case then why do I have the Moto X’s picture showing as the winner?  It all comes down to value, the $600 – $700 Galaxy S6 versus the $400 Moto X.  The Galaxy S6 has a slightly better processor, faster memory chips, a fingerprint sensor, wireless charging, IR Blaster and Samsung Pay built-in…but does that offset $200 – $300?

The Moto X may lack a few features of the Galaxy S6, but it too has a few virtues of its own – IP52 water resistance, dual front-facing stereo speakers, expandable internal memory, larger battery and a great camera section in its own right.  Like I said above, the S6 does have the better overall specs and if that is all we are looking for, then it would be the winner.  The Moto X is just so intriguing and seems like a lot of smartphone for only $400…it is for you to decide – specs or value?