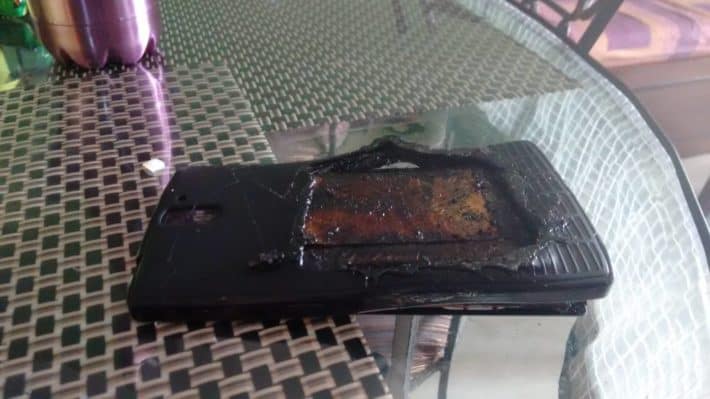 The owner of an OnePlus One awakened on Friday morning to find his smartphone literally on fire. Mr. Ankur Dugar, a resident of the capital city of India New Delhi, had plugged in his handset to the wall socket at around 2 that morning, before going off to bed. Having woken up a few hours later to the smell of burning plastic, Mr. Dugar posted his harrowing account on Facebook, where he not only uploaded several images of his badly damaged cellphone, but also went on to give an account of his experience of dealing with the OnePlus after-sales service. According to Mr. Dugar, he ran from pillar to post to see if he could convince the OnePlus One staff to provide him with a replacement unit, but reportedly, to no avail.

He wrote that he first contacted the company's customer care number, and was asked to visit his nearest OnePlus service center. "If your replacement is approved, you'll get a replacement" was apparently the assertion from the customer care executive at the other end of the line. However, much to his dismay, Mr. Dugar found out that the folks at the OnePlus service center were not as cooperative as he might have hoped they would be. His request for a replacement unit was turned down, even though he believes it should have been a slam dunk. Of course, we only have one side of the story as of now, and will have to wait for the official reply from OnePlus about its reasoning for denying a replacement unit, before coming to any conclusions either way.

Of course, smartphones catching on fire while charging is not exactly new. We've seen and heard reports of smartphones from Samsung and Apple (among others) catch on fire before, but in most cases with reputable manufacturers, turned out users were employing cheap third-party chargers, which were to be blamed for the incidents rather than faulty mechanism on the aforesaid phones. In one much-publicized incident in 2012, Samsung's Galaxy S III was said to have exploded while plugged into a car charger. While the owner claimed to have escaped with his life and limb on that occasion as well, an investigation into the incident initiated by Samsung revealed that the phone had been dropped into the toilet, following which, the owner had the brilliant idea of drying it off in a microwave oven of all places! While no one's quite accusing Mr. Dugar of doing anything as ill-advised as that, hopefully, OnePlus will initiate a proper investigation into the incident to get to the bottom of the story sooner rather than later.