Towards the end of the last decade, when smartphones as we know them today were just beginning to enter the consciousness of mainstream phone buyers worldwide, the one very crucial but often ignored criterion for choosing a handset used to be the battery life. With the passage of time however, as smartphones have become mainstream to the point of being integral to our daily lives, battery life is increasingly becoming a more important criterion, which can help or hinder purchase decisions for buyers. That being the case, PhoneArena decided to pit the newly-launched OnePlus 2 against a bunch of other premium handsets to gauge the smartphone’s battery life vis- -vis some of the devices it is supposed to be competing with in the market.

If you are an OnePlus 2 user however, the results are not exactly going to make for very pleasant reading. While the Motorola DROID Turbo with its massive 3,900 mAh battery occupies its pride of place at the top of the pile as having the best battery life amongst all premium flagships, the OnePlus 2 comes in only at number 9. That is significantly below the company’s previous flagship, the OnePlus One, which comes in at number five beneath a bunch of Samsung devices like the Galaxy S6 Edge+, Note 5 and Note 4 that come in at numbers two, three and four respectively. According to the test results, the sophomore effort from OnePlus could only muster an average of 6 hours and 38 minutes on a full charge with its 3,300 mAh battery, even though its predecessor, the OnePlus One, managed as much as 8 hours and 35 minutes on a smaller, 3,100 mAh battery. Even with the less-than-impressive stats, the handset has still apparently managed to outlast devices like the iPhone 6 Plus, which gave a measly 6 hours and 32 minutes of usage on each recharge, while the LG G4 lasted barely 6 hours and 26 minutes.

While the OnePlus 2 continues to remain a decent device for the price it’s asking, the results are a further setback for the handset, after a report published by Toms Guide earlier this week indicated that the OnePlus 2 battery takes significantly more time to get charged as compared to most of its premium Android rivals. The only device that lagged behind the OnePlus 2 in that test was predictably, the iPhone 6. The Galaxy S6 from Samsung and the ZenFone 2 from Asus had emerged on top in that test. The Droid Turbo from Motorola emerged the best in terms of the milliamps-per-minute yardstick. PhoneArena vindicates those results by publishing data from its own tests, which seems to come to the exact same conclusion that the OnePlus 2 isn’t exactly the quickest charging Android smartphone on the planet right now. The website reports that it took them a full two and a half hours to get the OnePlus 2 battery to go from from zero to one hundred, which is actually forty minutes slower than what Toms Guide says it takes the device to get a full charge! The ZenFone 2 and the Galaxy flagships also maintain their dominance in this test, in line with the earlier report. The charts from PhoneArena’s battery benchmark test can be seen below. 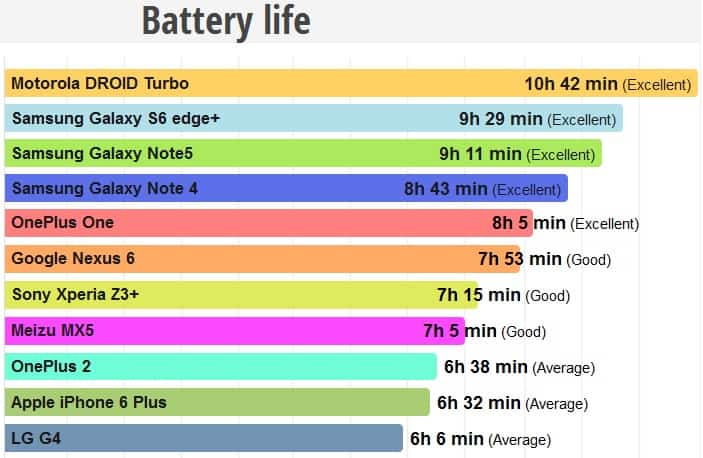 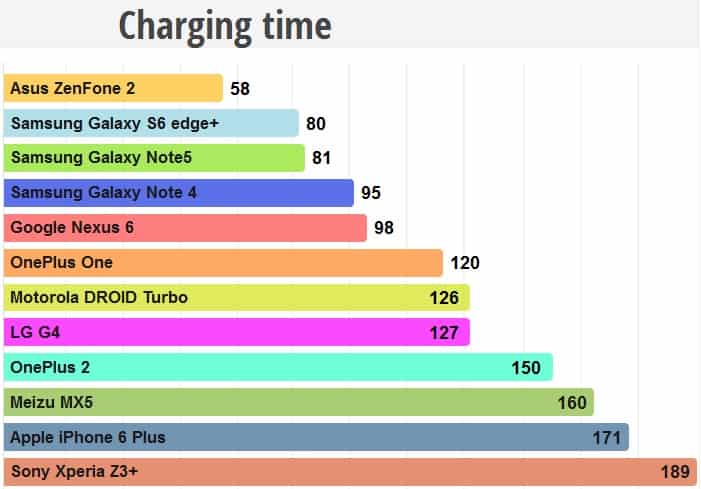