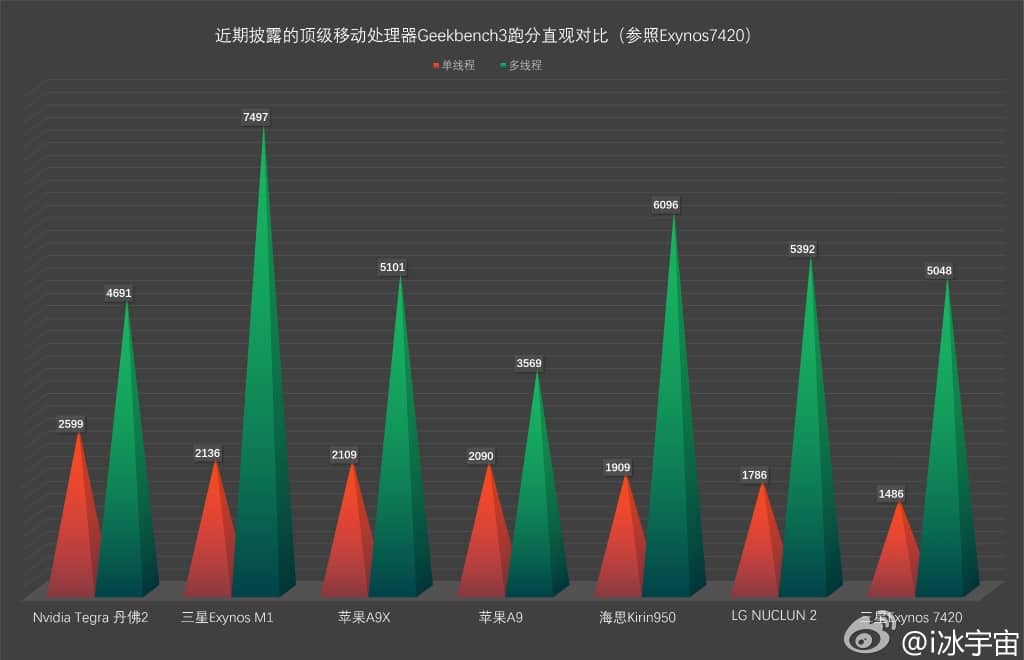 It's about that time to start looking at the next generation of processors. This year has been a tough year. Qualcomm had a number of chips that didn't perform all that well. With the Snapdragon 810 overheating, the 808 being slow because the clockspeeds are lower, and even the 615 being a bit choppy. This has made us take a look at some of the other processor makers out there. That includes NVIDIA, Samsung Exynos, LG's new processor as well as Apple's upcoming A9/A9x.

NVIDIA has their Denver 2 coming out soon, likely being announced at CES in January. Then there's the Exynos M1, LG's NUCLUN processor, all being benchmarked here. Thanks to a source from Weibo, who has since deleted the post. As you can see from the image, the Exynos M1 benchmarks the highest, with the Huawei Kirin 950 coming in right below it. Perhaps not so surprisingly, is the fact that the A9 and A9X both came in with the lowest scores. Typically Apple's processors do not have high clock speeds, which do obviously affect the benchmark scores for those processors. But Apple's processor do still provide a pretty good experience without any overheating or freeze ups, and that definitely matters more.

These are the 2016 mobile processors, notably absent here is Qualcomm's Snapdragon 820. Which should be available in early 2016. And we'll likely see it in LG and HTC's flagships that get announced in the beginning of the year. Like the LG G Flex 3, and the HTC One M10. Hopefully Qualcomm has a better 2016 than they had 2015. But there are plenty of competitors here. Also absent is MediaTek and their recently announced Helio X20. The Helio X20 is supposed to compete along side the Exynos 7420 and the Snapdragon 810. So not quite 2016 tech, but still a pretty powerful chip.

Processors are only part of what makes these devices powerful, and run smooth. The RAM inside as well as the software on top have a huge impact on that. Hopefully everyone can build some pretty optimized software for 2016. So that our phones don't melt our hands next year. We've had enough of that this year.