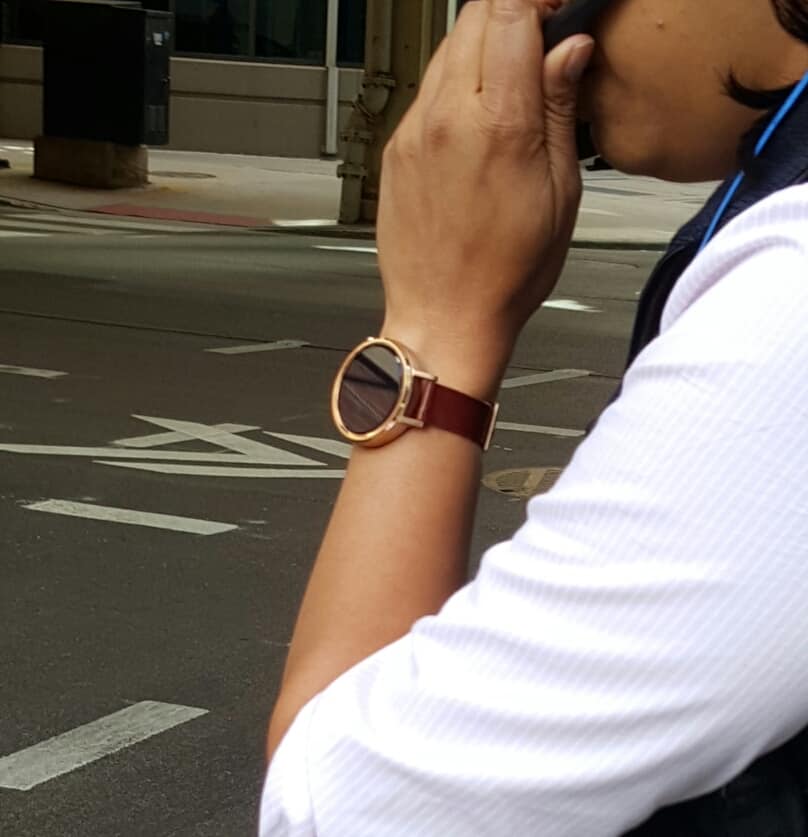 Motorola's second generation Moto 360 smartwatch is expected to show up sometime in the near future, but thanks to recent leaks over the last couple of weeks or so, the new smartwatch may have already been revealed. Motorola tweeted an advertisement not too long ago which seemed to have showed off the new design albeit without much of a change, and earlier this morning a couple of images popped up on the web of what look like the new Moto 360 in the wild, being worn on someone's wrist in fully functioning order. Now, it appears a third image has surfaced of the watch, but it's an entirely different variation of the earlier set of images with a different colored case and a different colored band.

As a recap, the first two images that appeared this morning showed off what is believed to be the new Moto 360 with a seemingly black or dark gray case (likely black since the first model had a black case option) along with a black leather band. The new image show here displays the same watch with the same design, but the band looks like a Cognac brown leather band instead, and the case, as well as the other visible metal for the clasp, appear to be gold.

You can also see the power button towards the top end of the watch appearing to be situated in the same place as the first two images earlier. At this point it'd be hard to deny this is highly likely the next Moto 360. The design looks exactly like the leaked image we saw in Motorola's tweet, and employees already seem to be walking around with live working models. Until everything is confirmed by Motorola however, there is no certainty this would end up being a final design. Having said that, there's a pretty good chance this is Motorola's consumer-ready design for the product, and if that's the case it could be arriving sooner than later. Aside from these leaks, there has also been a rumor that Motorola may be launching two size variations of the Moto 360 this year, one small and one large, both supposedly coming with different battery sizes.