Motorola’s Moto Maker is a customization hounds dream when it comes to personalizing their device. Motorola continues this trend with this year’s collection of new devices including the new Moto X Pure Edition. Though Motorola has already displayed a few different custom combinations of the device during the event and in various different images, there still hasn’t been any detail on what all of the customization options would be. As of today though an image found on Twitter displays what are seemingly all of the combinations one has the choice of selecting from with the Moto Maker tool for the upcoming Moto X Pure Edition.

The image tells you what parts of the phone are customizable but some have likely already discovered these areas themselves just by staring at images of the phone. For anyone else who was curious, Motorola will allow consumers to customize the frame of the phone, as well as the anodized metal accents which are the speaker grills and the metal surrounding the camera and flash on the back. You can also customize the front of the device or the “lens” as labeled in the image, and of course there will be plenty of options for the “inlay” or what most people will simply refer to as the backplate of the phone.

For the front customization, you’ll have two simple options of black and white just like previous versions of the Moto X. For the anodized metal accent colors there will be seven different options which include silver, dark gray, champagne, red, pink, lemon lime, and royal blue, and for the frame colors there will be three which includes silver, dark gray, and champagne. Perhaps no surprise to anyone Motorola has focused most of the customization options on the inlays category of the phone, which has four leather patterns including natural, cognac, black, and red, as well as four natural/wood patterns including bamboo, walnut, ebony, and charcoal ash, and 10 csr patterns which are basically all of the colors including black, chalk, slate, raspberry, cabernet, lime, turquoise, dark teal, royal blue, and navy. Suffice it to say there will be lots for owners of the new Moto X Pure Edition to personalize through Moto Maker. 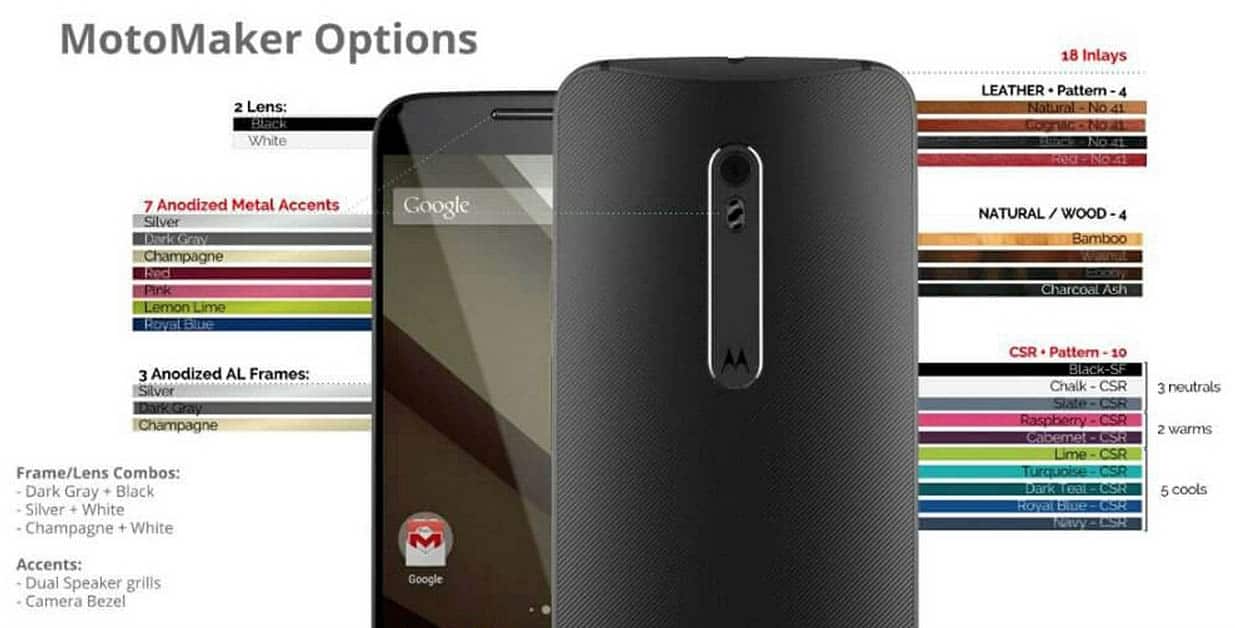