Indian smartphone vendor Micromax Informatics is prepping the launch of a new lower mid-range smartphone in India, dubbed the Canvas Nitro 4G E455. The device is the third in the company's Nitro range of smartphones, and although it hasn't officially been launched by Micromax as yet, it is currently listed for sale on Indiatimes Shopping at a price of Rs. 10,430 ($160). The printed MSRP of the Canvas Nitro 4G E455 is however, Rs. 12,499 ($190) according to a purported image of the retail box, posted on Facebook by retailer Mahesh Telecom. While the listing on Indiatimes and the image on Facebook give indications about most of the hardware features on the smartphone, the one thing which is still up in the air is the chipset powering the device. While the image of the retail box shows the device to have a Snapdragon 400 SoC under the hood, the listing on Indiatimes mentions an octa-core processor from Qualcomm as the chipset powering the smartphone.

Coming to the rest of the hardware specs on the Canvas Nitro 4G E455, the device comes with a 5-inch HD IPS display with Corning Gorilla Glass 3 Protection. The display panel comes with a pixel resolution of 1280 x 720, which gives it a 297 dpi pixel density. The device is powered by either an octa-core Qualcomm processor clocked at 1.7 GHz or a quad-core one clocked at 1.4 GHz as part of the Snapdragon 400, depending on which source one chooses to believe. The handset comes with 2GB of RAM and 16GB of internal storage, which can be expanded by up to 32 GB with the help of a microSD card slot. The smartphone comes with Android 5.0 pre-installed and carries a 2,500 mAh battery.

As for the imaging options found on the Canvas Nitro 4G E455, the device comes with a 13-megapixel rear-facing camera with autofocus and LED flash, whereas the front-facing secondary camera comes with a 5-megapixel sensor. As for connectivity options, the Canvas Nitro 4G E455 comes with 4G LTE and 3G HSPA+ support, alongside Wi-Fi 802.11 b/g/n, Bluetooth 4.0 and GPS. The phone also supports dual-SIM functionality, with its primary SIM supporting both TD-LTE 2300 MHz (Band 40) and FDD-LTE 1800 MHz (Band 3) and 2100 MHz (Band 1) in India. 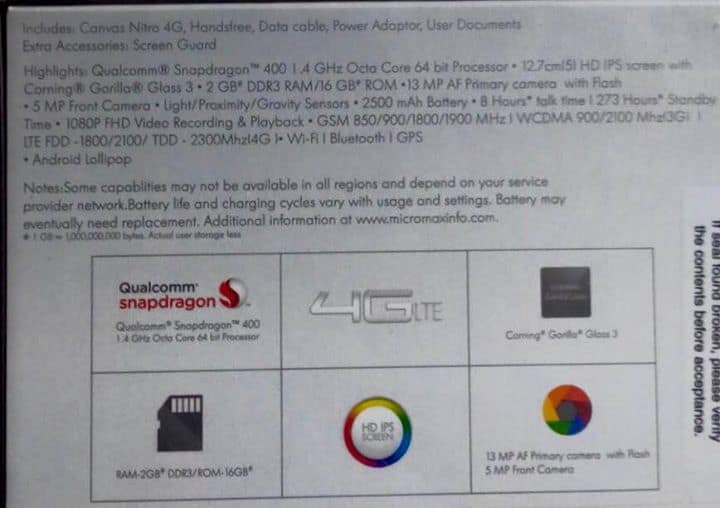