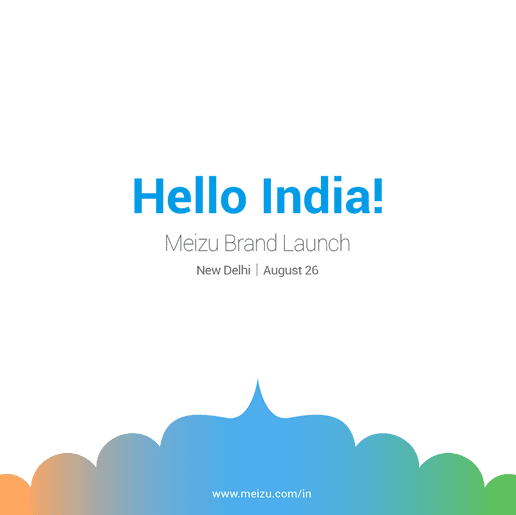 Meizu is one of the fastest growing Chinese smartphone manufacturers at the moment. This company has unveiled a number of smartphones this year, and their sales are going better than expected. Meizu has announced the M1, M2 Note, M2 and MX5 smartphones thus far this year, with the latter one being their flagship for 2015. It is still unknown whether Meizu intends to announce the MX5 Pro before the end of the year considering that they might scrap that line of devices altogether. The company intends to introduce a new premium line of smartphones at the beginning of 2016, and the upcoming device might be called the MX5 Pro Plus, though that hasn't been confirmed just yet.

That being said, the Meizu MX5 is currently available only in China, and through a number of Chinese resellers, but it seems like it might hit India soon. Meizu has announced an event for August 26th, and even though they haven't specified what will be announced, it is safe to assume that the MX5 is going to land in India on the said date. The M1 and M2 Note have already launched in India, and M2 and MX5 are the only two devices left to be announced in that Asian country. It is possible that Meizu intends to unveil both the MX5 and M2 on August 26th, we'll see.

The Meizu MX5 features a 5.5-inch 1080p (1920 x 1080) display, 3GB of RAM and 16, 32 or 64GB of non-expandable internal storage. MediaTek's Helio X10 (MT6795) 64-bit octa-core SoC powers this thing, and a 3,150mAh battery is also a part of this package. The 20.7-megapixel camera is available on the back of this phone, and a 5-megapixel shooter can be found up front. The MX5 also sports a fingerprint scanner below the display which doubles as a fingerprint scanner. The M2, on the other hand, is an entry-level Meizu-branded handset. This thing sports a 5-inch 720p display, 2GB of RAM and 16GB of expandable internal storage. The device is powered by MediaTek's MT6735 quad-core SoC, and sports a 13-megapixel camera on its back. There you have it, one or both of these phones will be unveiled in India on August 26th, stay tuned.