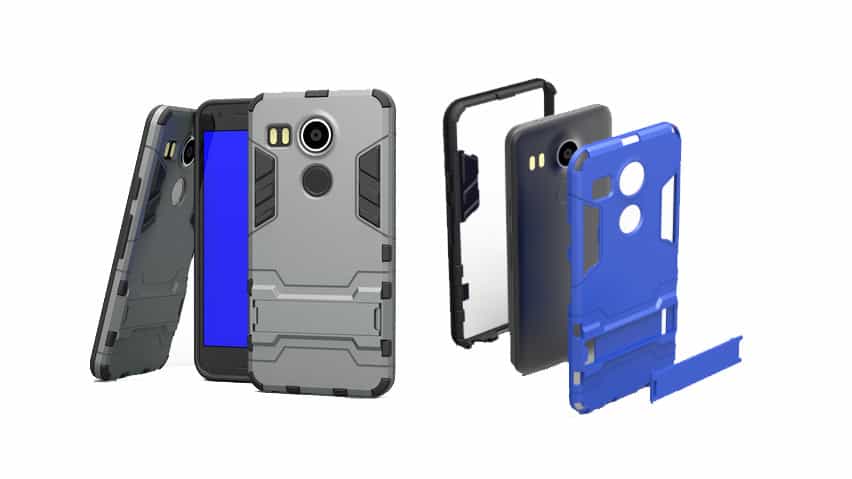 By now, most of you probably know how this works. First a device gets leaked, then we see some pictures of it in the wild. Next are the case leaks. And here's our first one for the LG Nexus 5 2015. Which should be announced pretty soon. Only thing we are waiting on is for someone to do a full review before it's announced. Don't laugh, it's happened before with the Nexus 4.

Thanks to AliExpress, we have a case render here of the Nexus 5 2015 from LG. It looks very similar to the leaks we have all seen in recent days. And it looks a lot like the one we saw earlier today in the wild. Here we have a hard case from AliExpress with a kickstand. And you can see it comes in a few different colors. You can also see that it still has that bulging camera, as well as what appears to be a button below it. Which my best guess would be, that's a fingerprint reader. Since we don't have a home button in stock Android.

These cases are likely only the beginning. usually we will see cases from the likes of Ringke, Spigen and Verus on Amazon before the device is announced. Usually those renders are a bit better, and higher quality. But it definitely looks like the Nexus 5 is coming real soon. In fact, I'd put my money on it being announced earlier than in previous years. Typically, Google announces the new Nexus devices and the official name of the new version of Android, around Halloween. But with the number of leaks we've seen already, I have a suspicion we might see the announcement in September, if not earlier. We do have IFA coming up, during the first week of September, and right now there are no plans from Google to be present at IFA this year. So I'd doubt we see a Nexus announcement in Berlin. We also have the new iPhones being announced the week after. So it's looking like September is going to be a pretty busy month around these parts. Even though it typically is, anyways.