Round about this time, rumors and speculations are always in abundance. This is largely thanks to the upcoming IFA event which takes place every year and is set to start next week in Berlin. At the show, a number of manufacturers will be showing off their latest goods and therefore, the weeks leading up to the event are always full of tasty leaks and rumors. That said, last year saw IFA become a bit of a hot-spot for smartwatches and since then, the run-up to CES and MWC both saw their fair share of smartwatch speculation. With IFA now here again, this year's event is proving to be no exception and is already providing its fair share of smartwatch rumors and leaks.

For instance, Motorola is widely expected to be announcing their next-gen smartwatch, the Moto 360 (2nd Gen) at the event. Therefore, speculation is high about this particular device right now. Not to mention, a few days back, reports began to come through which not once, but twice, showed what was reported to be leaked images of the Moto 360. These were images of the device being snapped in public. "In the wild" as they say.

Well, with the announcement drawing closer, it now looks like the Moto 360 (2nd Gen) might have been spotted in the wild again. However, this time it was spotted on the arm of a much more official wearer. The image above shows Chen Xudong, Lenovo's Senior Vice President, who is said to be wearing the next-gen Motorola smartwatch. Although the image is not that revealing, for those wondering why it's believed this is the new Moto 360, the answer is simple. The home button is widely being reported to have moved position (from the old 3 o'clock position to the new 2 o'clock position). As you can see in the image, the smartwatch being worn does indeed sport a 2 o'clock positioned button. To give you another taste, the image below also seems to be a new image which has now emerged and again said to be showing the next-gen Moto 360 smartwatch. Of course, with IFA only a matter of days away, the official announcement will soon enough be here and there will be little further need for these 'in the wild' images. Until then though, they are useful to give an insight into what to expect. 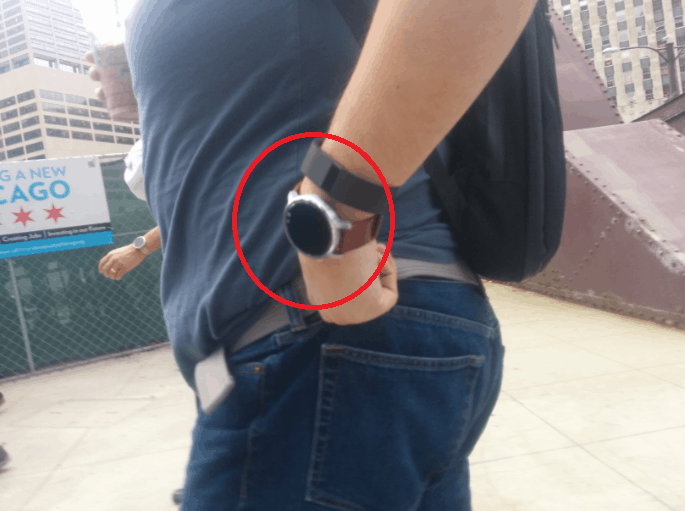