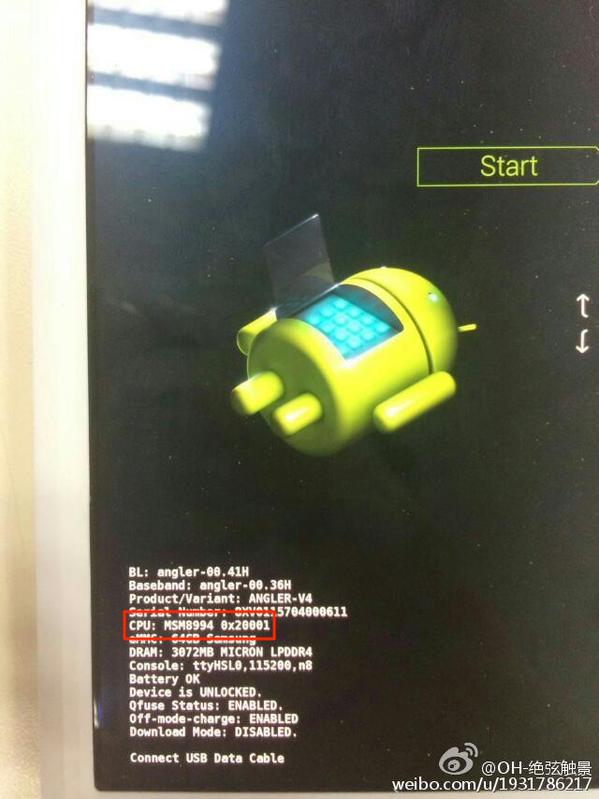 There were some rumors going around that the next Nexus, which is supposedly being built by LG and Huawei, would feature the Snapdragon 820. Which many of us were hoping for, seeing as the Snapdragon 810 is almost seen as "old" technology at this point. Having been available all year. There's also that little overheating problem that the company has been facing as of late. The Snapdragon 820 is coming soon, but looks like it won't be in new smartphones until about early 2016. And according to a new leak from OnLeaks on Twitter, it appears that the Huawei Nexus will indeed be using the MSM8994 version 2.1. That's the Snapdragon 810 for those that haven't kept up with Qualcomm's numbers.

The picture that OnLeaks tweeted also shows a few other interesting tidbits about the new device, including its codename of Angler. As well as sporting 3GB of DDR4 RAM inside. Now that's not quite the amount we've been seeing with other flagships out there right now like the Galaxy Note 5, OnePlus 2, and the ASUS Zenfone 2. But for a Nexus running stock Android M, it should be more than plenty of RAM for everything you need to do.

Google has already unveiled the name of the new version of Android, which will be Android Marshmallow. Which means we are probably looking at an earlier release date for Marshmallow and these Nexus devices than usual. Usually Google releases them on Halloween or close to the end of October. However, they also usually announce the name of the next version of Android in September, and not mid-August. So I'd be willing to bet we'll see them come the end of September. Right now it's rumored that LG will be making the smaller Nexus at about 5.2-inches with Huawei making the larger one at about 5.7-inches. This is great because it should satisfy everyone, those who want a smaller phone and those who want a larger phone.

Although the partnership with Huawei is likely to go further than just the Nexus. Many of you know that Google services have been blocked in China for quite some time. And Google is hoping to work with Huawei to change that. As with most smartphone makers in China, they are partially funded by the government. So Huawei could have some pull. It'll be interesting to see how all this plays out.