T-Mobile continues to get involved in more and more controversy, which could be perceived as positive by some, as it gives the carrier a lot of attention from the media; but it could also affect it, as most of what has been reported is negative news about T-Mobile as a whole. Some of the most recent controversies that T-Mobile has either generated or being involved, include a fight on Twitter; where T-Mobile’s CEO, John Legere defended himself after being called a liar by Sprint’s CEO. John Legere has always been known for speaking his mind when something is not right by his company’s standards, an aspect of his personality that has greatly helped shape T-Mobile’s overall business philosophy. Today, John Legere published a new post on the company’s official blog, in which he made public the number of signatures that a petition he sent last year to Change.org made. Legere stated that with over 250,000 signatures, it was time to send a message to the other three major carriers to end overages.

John Legere noted how with the great number of signatures his petition reached, he was going to be able to send a message “that that they won’t be able to ignore”. By “they”, Legere referred to the other three major carriers in the nation; Sprint, AT&T, and Verizon, which still rely on charging their customers overages. John Legere wants to make a change in the way carriers operate and charge their customers, which have accounted more than $1.5 billion in overage penalties. Legere’s Change.org entry, reached the number one position as a technology-based petition, which means that people surely care about putting an end to overages.

The way in which John Legere will send the message to the other carriers in the near future, depends on what the quarter million people that signed decide, as he gave the nation three major ways for them to vote to deliver the message. The first one is a “Skyline Takeover”, in which Legere will cover a number of buildings with the petition and all of the names of people that signed it, in the regions where the other carriers operate the most. The second option is “Skywriting”, and as John Legere stated in his blog post, he would write the message directly above its competitors’ headquarters. The third and last option is an “Overage Counter”, where people will be able to see exactly how much AT&T, Verizon, and Sprint have charged their customers in overages. To vote and put a stop to overage charges, you just have to send a tweet with any of the three hastags, #tmobileskyline, #tmobileskywriting, or #tmobileoveragecounter. 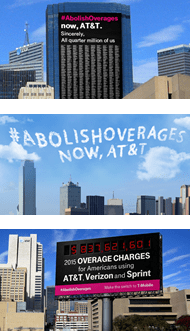