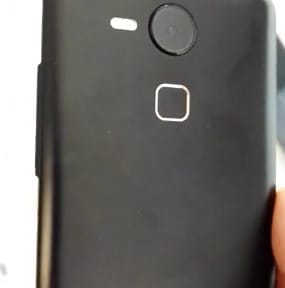 For a long time now, we've been hearing of new Nexus devices, two smartphones in fact; one made by Nexus veteran LG and one from a controversial newcomer, Huawei. The reason Huawei would be a controversial choice is that the Chinese manufacturer hasn't been looked upon by the US Government or users in North America as a brand they can trust. Mostly down to the fact that the Chinese government has a big hand in their funding. Either way, it looks like the Huawei Nexus could be a very real product and if these latest leaks are anything to go by, it could also be launching with a fingerprint sensor.

A fairly svelte looking black smartphone has been captured on film with a camera fitting similar to that of the Nexus 5's design and a fingerprint sensor. There is of course, every chance that this is just yet another Chinese smartphone destined for Huawei's home market dressed up in black, but partnering with Huawei is making more and more sense. Google Play is mostly non-existent in China, and partnering with one of the largest manufacturers over there could help Google make inroads with the government, but more than that; Huawei know fingerprint sensors. Whereas LG seems to be a complete newcomer to the technology – having not shipped a device with one yet – Huawei has been using them in devices launched in China for some time now. Motorola have some experience as well, but this dates back to the Atrix and we now know the Nexus 6 almost shipped with a fingerprint sensor.

You're probably wondering why a fingerprint sensor seems all that important for a Nexus device all of a sudden. Well, during I/O 2015 earlier this year, Google announced Android M, to launch this Fall, and with it they announced Android Pay. Both Android M and the new payment system rely on fingerprint authentication to stay secure, and if Google want this new technology to take off, they'll need to ship Nexus devices with the hardware onboard for manufacturers other than Samsung to follow suit. A September launch is being rumored for this new Nexus device, and if this is indeed a real product this probably won't be the last we see of it before then.