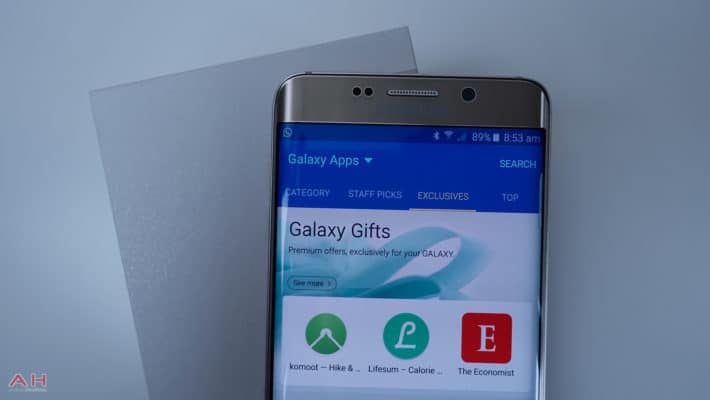 Samsung always loads up their new flagships with all kinds of apps, paid services and games. This time around, it's not much different. Some apps have been taken out or replaced. One example of that is Dropbox, you used to get some extra storage with Dropbox. However with Samsung's new deal with Microsoft you now get 100GB of free storage through OneDrive. Along with having Microsoft's Office apps pre-installed on the Galaxy S6 Edge+ – for some reason they are not on the Galaxy Note 5. Now these gifts are not pre-installed on your device when you get it, you can get these through the Galaxy Apps app on the device. However, OneDrive is pre-installed here, but can easily be uninstalled.

Some of the apps you get include the Economist, which nets you a 6-month subscription. The Guardian, which gives you a 6-month ad-free subscription. Kindle for Samsung, which gives you a new book each and every month. Lifesum where you'll get a 6-month Gold subscription, NY Times gets you a 6-month subscription although in the US and Canada it's just 3 months. With Scribd you get 3 months of unlimited access to their library of nearly 1 million books. There's also TripAdvisor, where you can get a 15% discount next time you book your trip (over $100) through TripAdvisor. There are a few other apps as well. Including Sketchbook for Galaxy, ArtRage, Driver SpeedBoat Paradise, Empire: Four Kingdoms, Hearthstone Hereos of Witchcraft, and Komoot.

While you may not ever use any of these Galaxy Gifts that Samsung is providing with both the Galaxy Note 5 and Galaxy S6 Edge+, the are still nice gestures. The 100GB of OneDrive Space will definitely come in handy. Especially with Microsoft ramping up their OneDrive app, to where it can now auto-backup pictures to your OneDrive account. Very important for a lot of people. Especially those that may not trust Google Photos for some reason.

Both the Galaxy S6 Edge+ and Galaxy Note 5 are available through AT&T, Verizon, T-Mobile, Sprint, Amazon, Best Buy and other retailers. So you can pick up yours today, and make sure to take part in these Galaxy Gifts.