Skip to content
Trusted By Millions
Independent, Expert Android News You Can Trust, Since 2010
Publishing More Android Than Anyone Else
39
Today
134
This Week
277
This Month
1140
This Year
127223
All Time

It is no secret that Google’s search engine is a powerful and useful tool.  Most PC, laptop, notebook, tablet and smartphone users have used it on more than one occasion.  We use it not only to find a particular place…be it restaurant, vacation spot or store, but we also use it for research.  I use it constantly to look up the history of a company or a device, specifications, truths, rumors and people.  If you take time to think about it, the answers you find on Google can greatly affect your outlook or opinion on a topic or a person, because you can be sure that Google will have something to say about your topic.  When I say that, I am not inferring that Google could be passing out false rumors…after all, they are simply listing what others have said, however, there lies the potential influence that Google could muster – the order in which their findings are ranked.

Google has always said that their main goal is to deliver us the best search results possible, and that seems to be the case.  Google has maintained the slogan and policy that “you can make money without doing evil.”  Robert Epstein, a senior research psychologist at the American Institute for Behavioral Research and Technology wrote an essay in ‘Politico’ and he is afraid that Google could have a huge impact on the election of the next President of the United States.  Now there is no reason to think that Google will ‘rig’ the upcoming election, but the scenario could happen.  Epstein wrote, “Research I have been directing in recent years suggests that Google, has amassed far more power to control elections – indeed, to control a wide variety of opinions and beliefs – than any company in history has ever had.  Google’s search algorithm can easily shift the voting preferences of undecided voters by 20% or more – up to 80%  in some demographic groups – with virtually no one knowing they are being manipulated, according to experiments I conducted recently with Ronald E. Robertson.”

Obviously Google could not influence every voter – many would never go to Google to search the elections or candidates – but with the information highway jamming up with so much information, many do rely on Google to ‘sort’ these things out.  Epstein points out that in the US that half of the Presidential elections have been won by margins less than 7.6-percent and in 2012, we are looking at a margin of only 3.9-percent.  It comes down to what order Google lists their findings – below is a search done on “Donald Trump immigration.”  Google could easily influence people’s direction on how to think about this topic and help you decide if Trump is your ‘man.’

Epstein is not saying that Google is currently doing this or would in the future, but it is something to think about and something to consider and watch to make sure that it never happens.  Google has tremendous power to shift people’s way of thinking and we need to make sure our nation is prepared to prevent that from happening…of course he offers no solutions.  Hopefully, Google will follow its philosophy of “no Evil.” 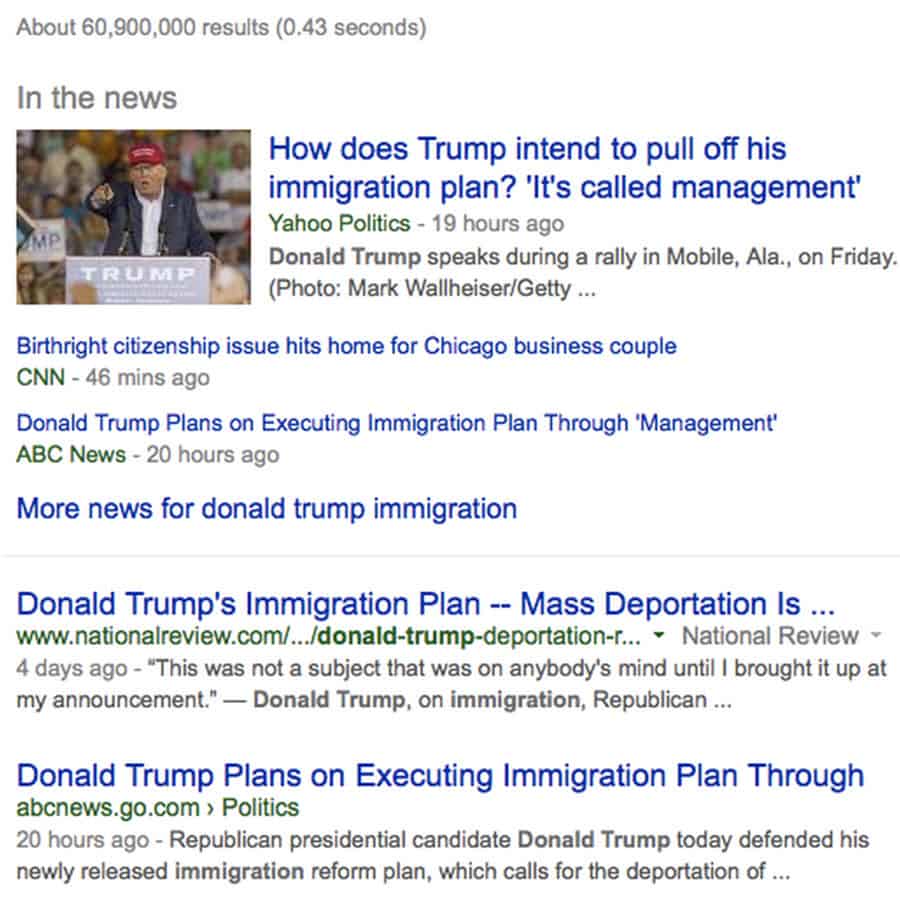