With smartphone battery life increasingly becoming a more important criterion for users, PhoneArena decided to put Samsung’s newly launched Galaxy S6 Edge+ through its paces to test its battery credentials. According to the results, users of the Galaxy S6 Edge+ can theoretically expect a slightly better battery life when compared to the Galaxy Note 5, even though the two phones carry the exact same hardware and battery as each other. The results of the battery benchmark test shows that the S6 Edge+ actually did better compared to its phablet cousin – albeit, ever so slightly. While the Note 5 had earlier scored 9 hours and 11 minutes in its battery test, the S6 Edge+ has now ended up bettering that score by getting 9 hours and 29 minutes, which is said to be outside the margin of error typically observed in battery benchmark tests.

As for the time taken by the S6 Edge+ for a complete recharge, its 3,000 mAh battery is again faster from zero to one hundred, compared to the Note 5. The smartphone is said to take around 80 minutes for a complete recharge when using the bundled charger. So fast is the charging time of the S6 Edge+ that it is second only to the Asus ZenFone 2, which goes from zero to one hundred in an amazing 58 minutes according to prior tests. Not that the Note 5 is a slouch. It is able to fully recharge its batteries in only a minute longer than what it takes for the S6 Edge+ to do the same. That one minute differential however, can be explained away as typical statistical variance within the margin of error.

Both the Galaxy Note 5 as well as the S6 Edge+ phablets from Samsung were released last week by the South Korean tech-giant at its ‘Unpacked’ event in New York City. The devices both feature 5.7-inch QHD (2560 x 1440) Super AMOLED displays and are powered by Samsung’s own Exynos 7420 chipsets. Each device comes with 4 GB of RAM and 32 or 64 GB of storage, with a 128 GB version probably in the pipelines for the future. Both devices come with the exact same 3,000 mAh Li-ion battery and feature 16-megapixel primary cameras and 5-megapixel selfie-cams. The charts from PhoneArena’s battery benchmark test can be seen below. 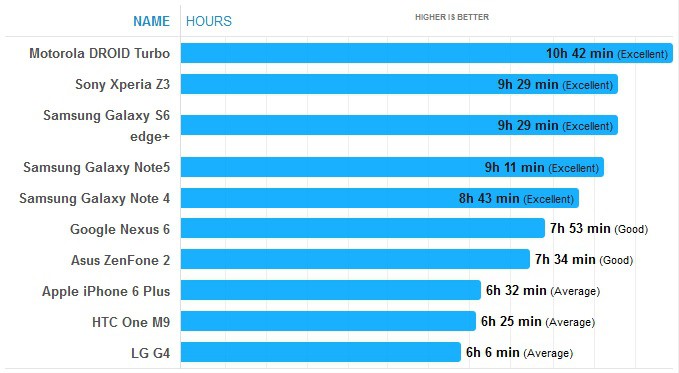 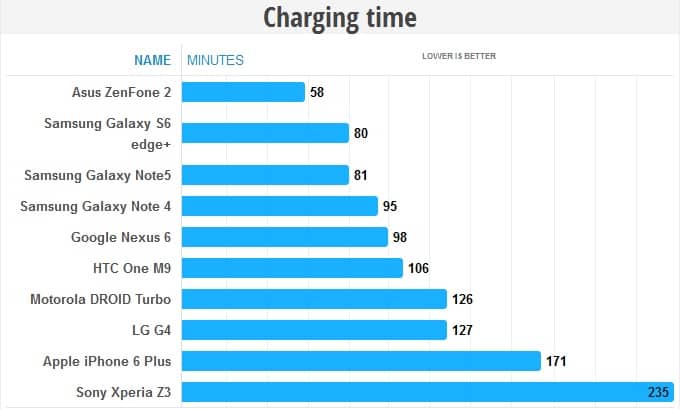