Lenovo hasn't made a huge splash in North America in the mobile world. When it comes to PC's though, they are pretty big. Lenovo typically brings over some low-end or mid-range tablets for us to play with in the US, and leaves the higher-end and more interesting tablets for China, their home market. However, I was a fan of the Lenovo Yoga tablets that are available here in the U.S., and I was excited for the Lenovo Tab 2 A10 for one reason. That was the fact that Lenovo was mirroring Motorola's outlook on software for Android. At least outside of China. In the fact that they are going stock Android for the most part. Something that many Android purists love about Motorola.

On the spec sheet, it's rather lackluster. However, we have to remember that this tablet is under $200. So that's kinda expected. For the display, we're looking at a 10.1-inch 1920×1200 LCD panel. It's powered by the MediaTek MT8165 processor which is clocked at 1.7GHz. Along with 2GB of RAM, 16GB of storage and a microSD card slot that supports up to 64GB. For cameras, we have a 8MP rear camera and a 5MP front-facing camera. The 7000mAh battery will keep you going all day long. Lenovo also included WiFi 802.11 a/b/g/n, Bluetooth 4.0 and NFC. 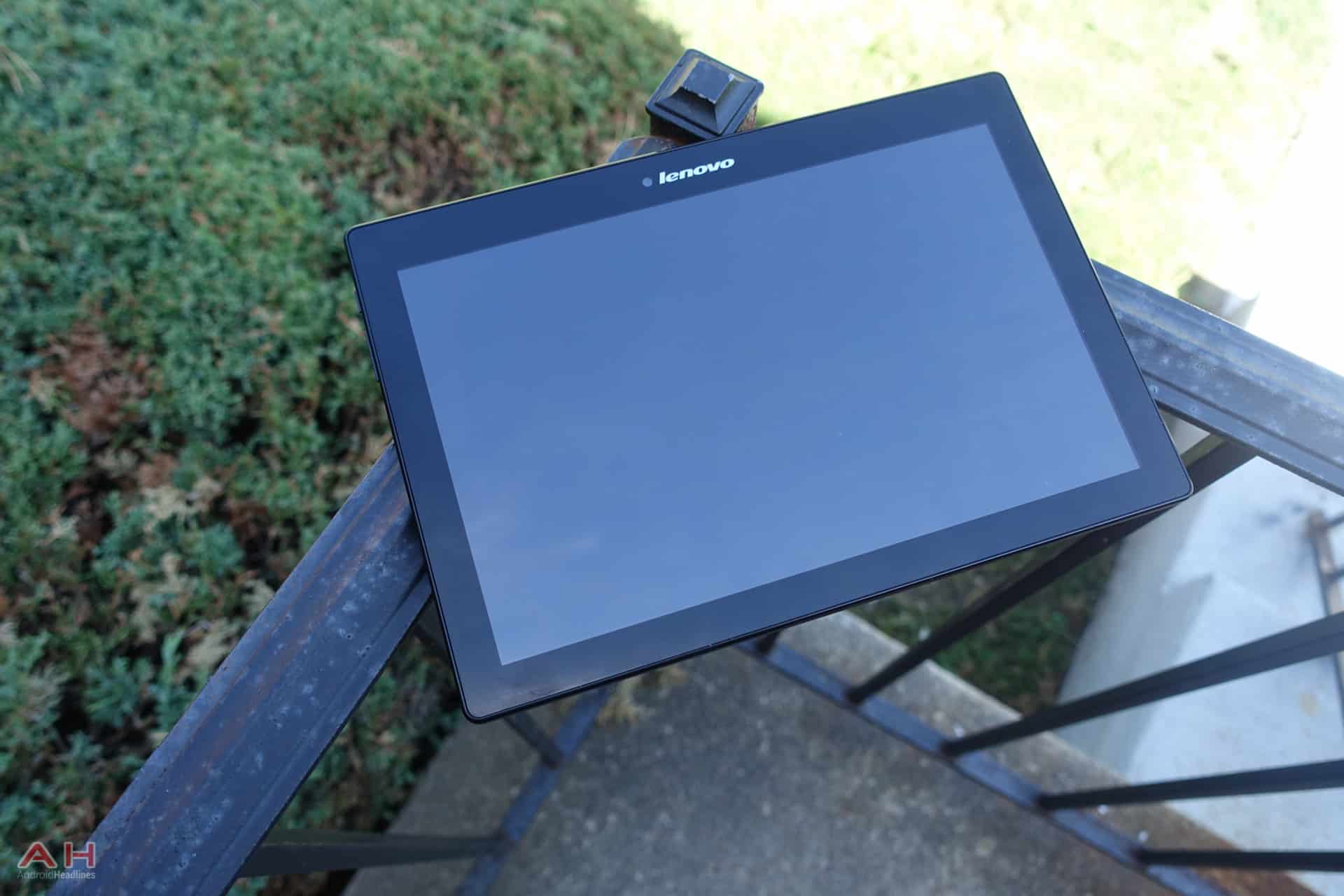 Again this is a budget tablet from Lenovo, so no glass back or aluminum frame here. But we do have a soft plastic backing on the Lenovo Tab 2 A10. It's not that heavy either, it feels pretty light, but does weight 509 grams, or 1.12 pounds. There is just one complaint I have on the build of the Lenovo Tab 2 A10, and that's where the speaker is. We have speakers on the back of the tablet, powered by Dolby. The speakers are quite good, however, if you have the tablet sitting on a table or desk and using the speakers, it's a bit muffled and doesn't sound all that great. 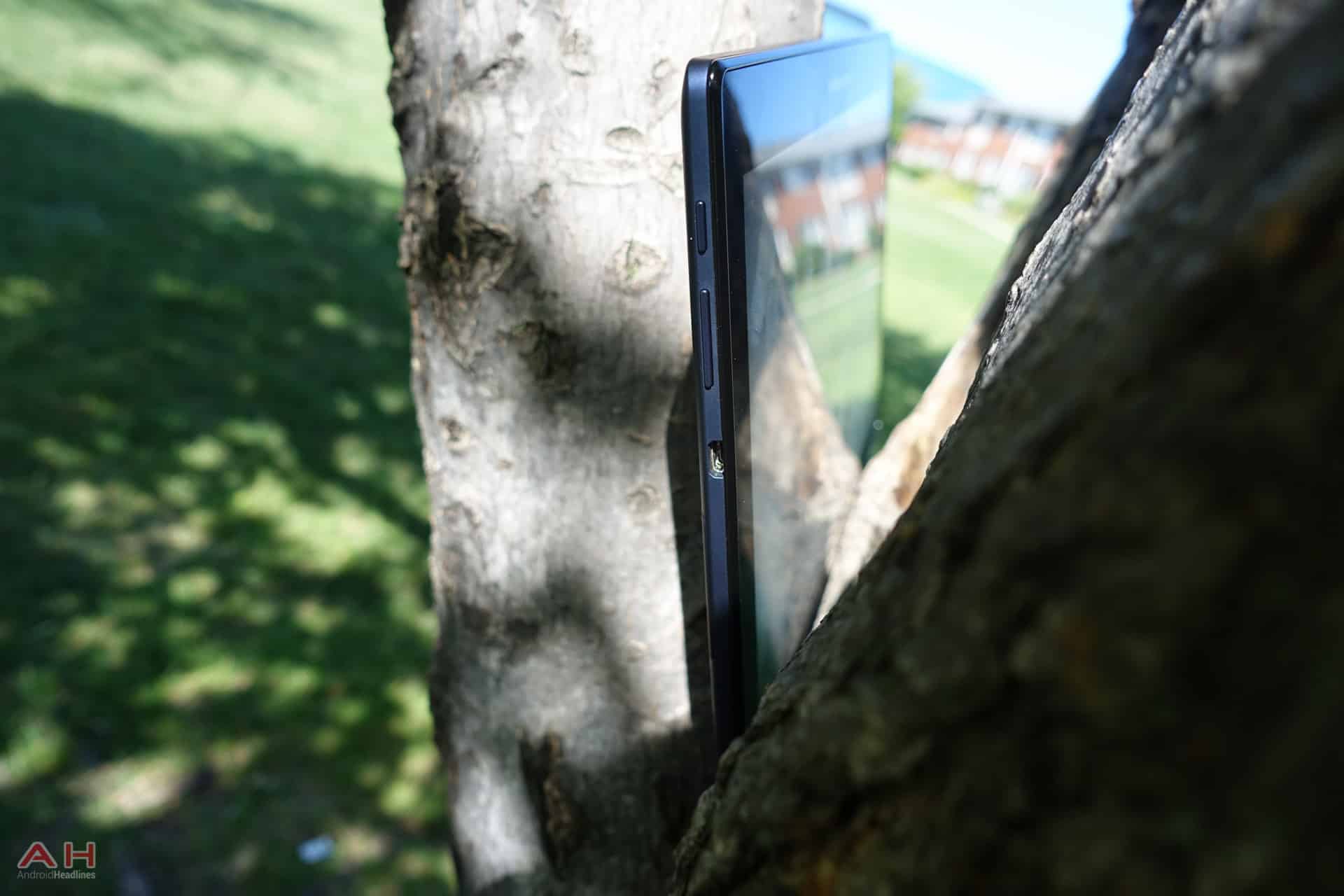 On the left side of the Tab 2 A10, we have our power button, volume rocker and micro USB port. While up top is the 3.5mm headphone jack and nothing on the right side or the bottom. On the back we have the camera, along wit the speaker we were talking about earlier, which stretches the entire length of the tablet. It's a bit weird having the micro USB port on the same side as the power button and the volume rocker. But that's likely because of where the logic board is located inside the tablet. 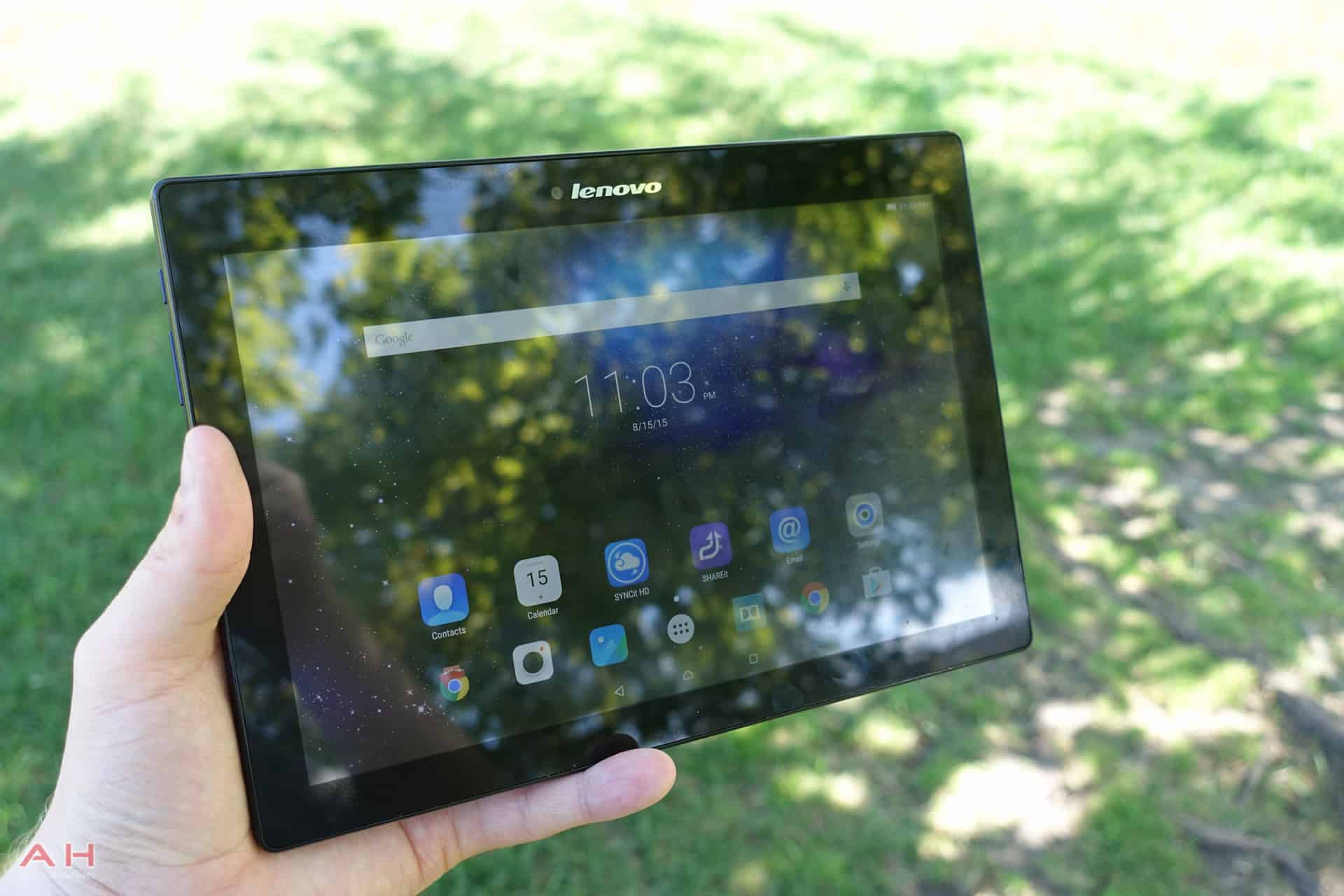 The display here is a 1920×1200 resolution display, so it is Full HD, stretched to 10.1 inches. It doesn't look too terrible actually. Watching YouTube videos on it is pretty good, as well as other videos. But there's just something about the display, and it might be the colors, that just doesn't look amazing. It could also be that most other tablets this size are closer to a 2K resolution than 1080p. As usual with some cheaper tablets, the screen does have to be tapped a bit harder than you'd expect. Not a huge deal, but does take some getting used too. As you can tell from the picture above, it is a bit tough to see the display while outdoors, and it really picks up fingerprints like a magnet.

With the MediaTek MT8165 inside, we're looking at a pretty decent device. There's also 2GB of RAM in here which has made performance quite good. I've played a few games and have had no issues with it stuttering or lagging at all. Definitely a surprise, compared to other tablets in this price range. There's been no issues here with apps closing by themselves either. There's plenty of RAM here for what the Tab 2 A10 offers. It doesn't do as much in the background as some smartphones and other higher-end tablets which means it doesn't use as much RAM. 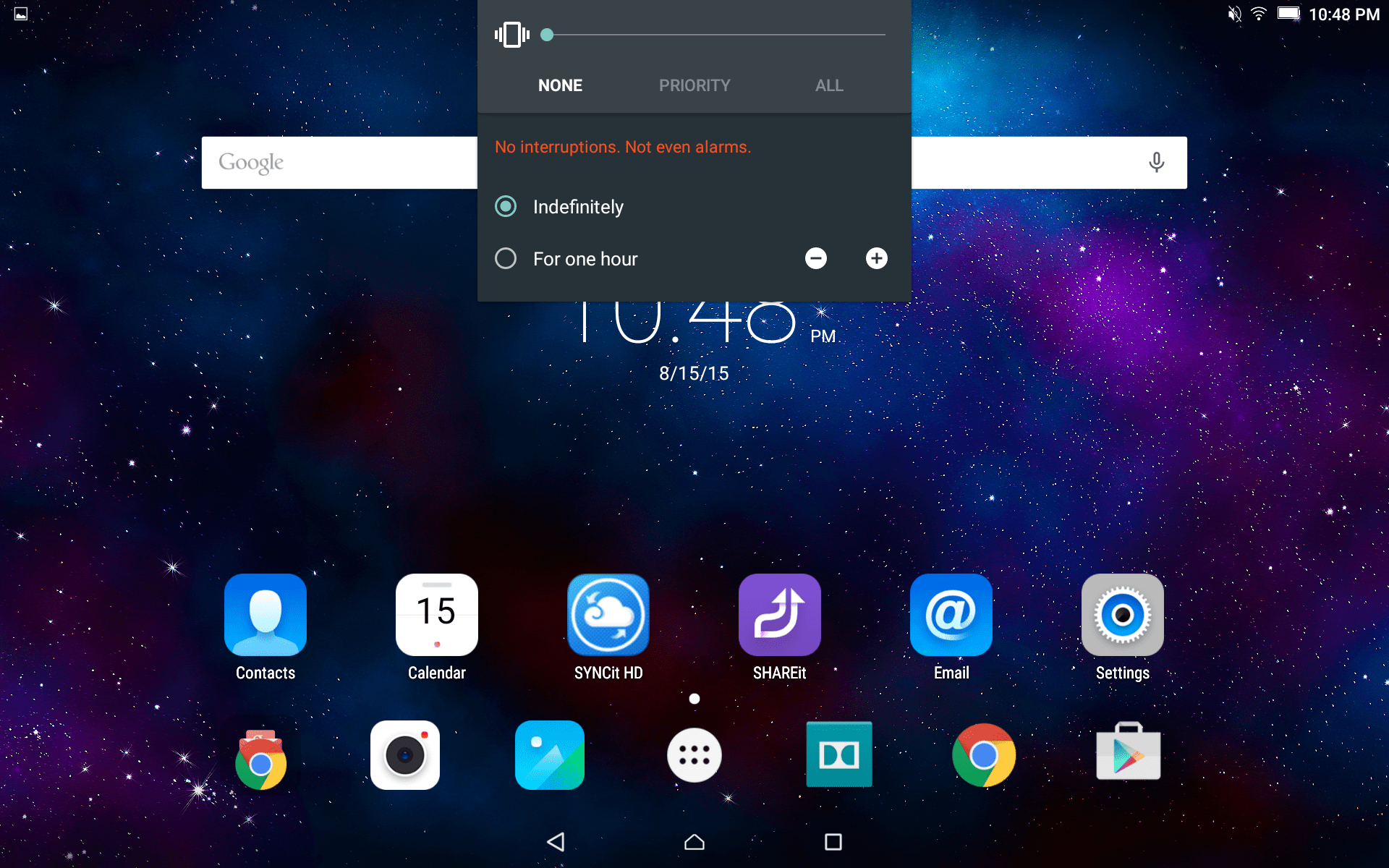 At Mobile World Congress, Lenovo had shared with us that they were going to be going Stock Android starting with Lollipop in markets outside of Asia for their devices. Many people didn't believe me, but here we are with the Lenovo Tab 2 A10 which is running Lollipop, and is almost bare stock Android Lollipop. There's a few differences here, with the main one being the settings app. Which looks to be a left over from Lenovo's skin they were using previously. The launcher is also slightly different. We do have an app drawer, but unlike the Google Now Launcher, it does not have that card like background, instead its transparent so you see your wallpaper there. 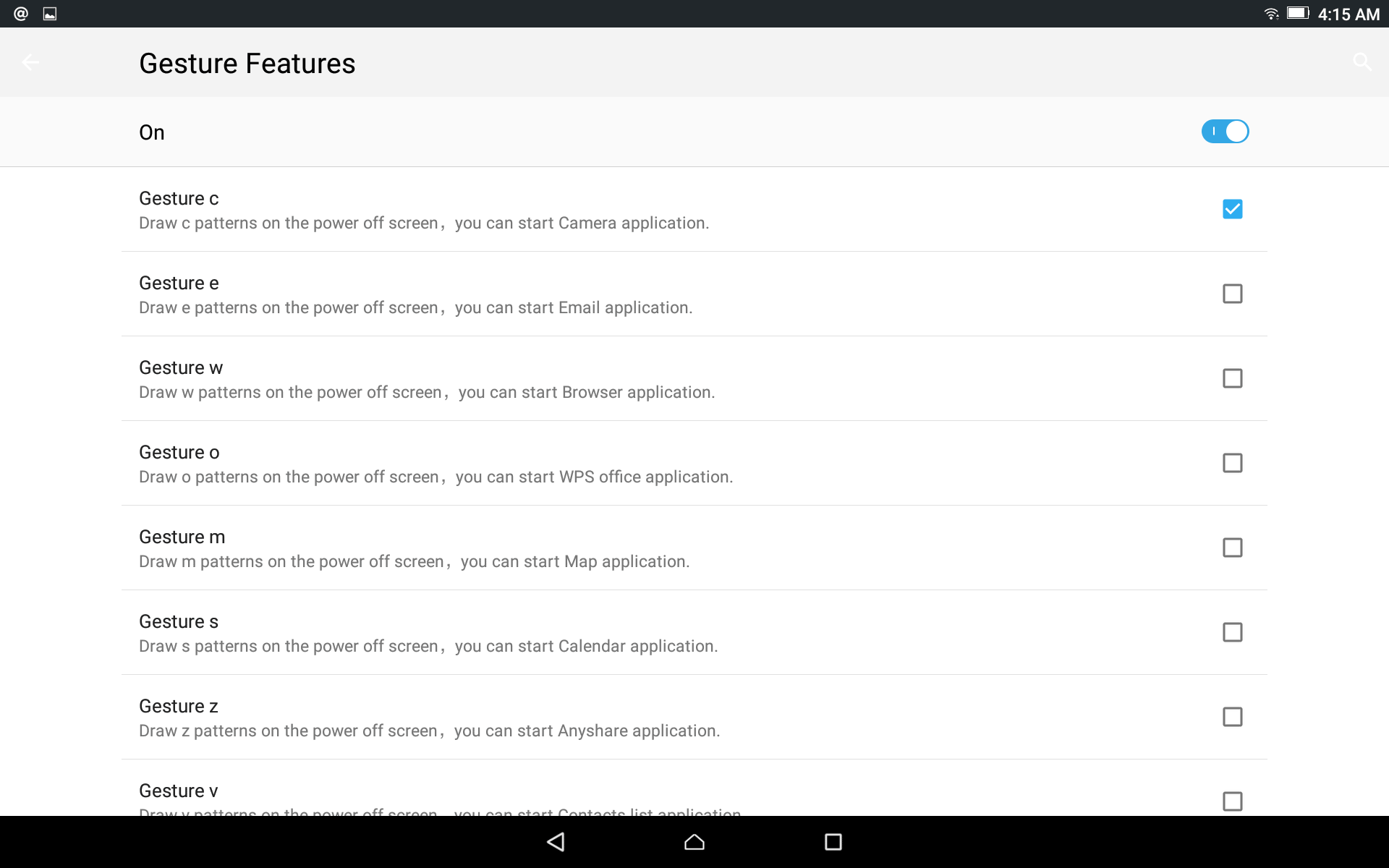 Lenovo also has some gestures built in here. For example you can draw a c on the screen when the power is off to open the camera. Or draw an e to start email. There are many, many other gestures that you can enable here on this tablet, including the double tap to turn it on, which is a feature that's been getting really popular in the past few years. However, you cannot customize them. Say to draw a G for Google+ or a T for Twitter, you can't add that in. 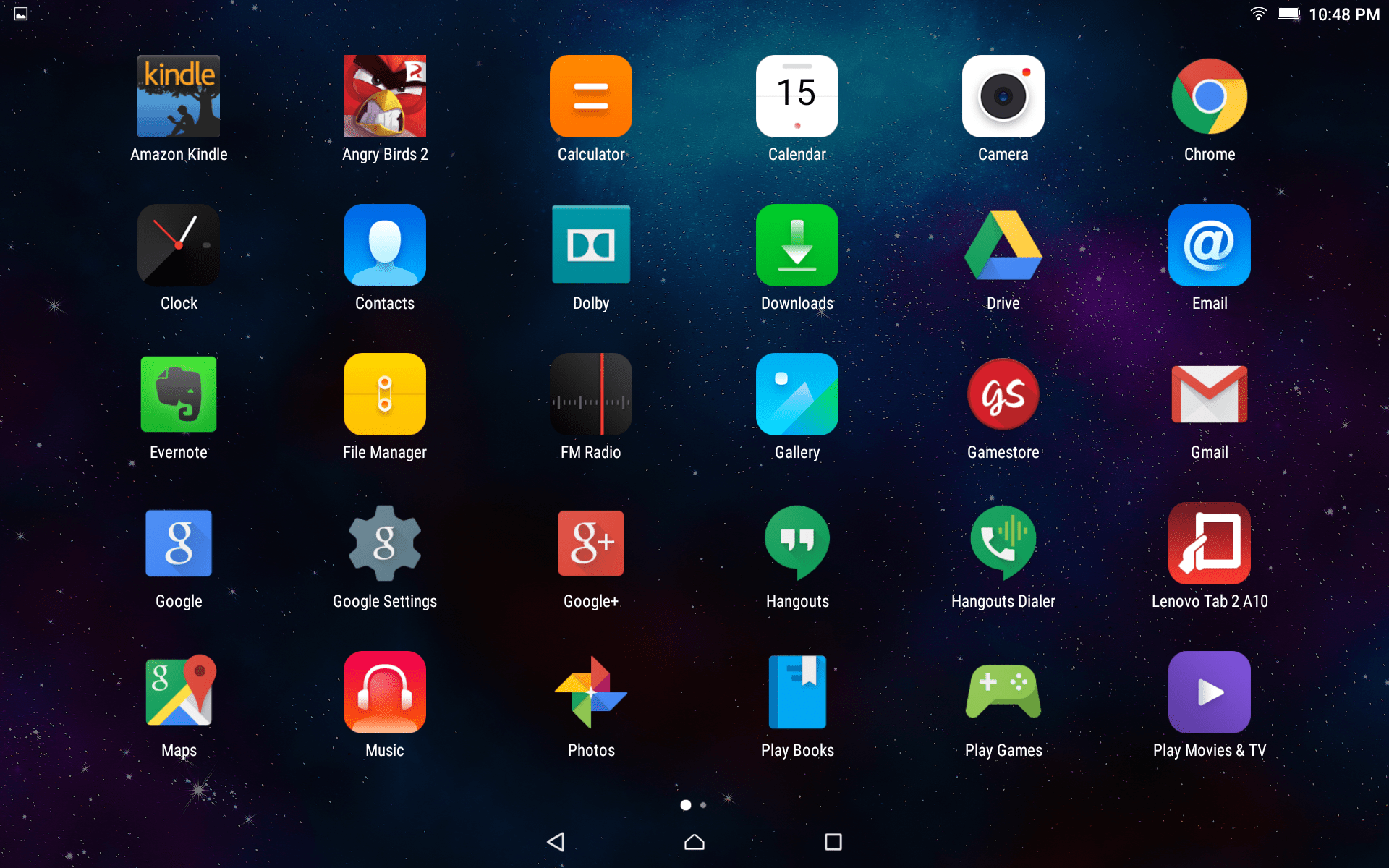 Something else Lenovo has here is the ability to schedule when to turn on and off this tablet. That's something we've seen in a lot of smartphones coming over from China. So you can schedule it to be turned off while you're asleep and turn on shortly before you get up. It's a small feature, but also a pretty cool one.

Lenovo has a few apps that are pre-installed here. They include Amazon Kindle, Dolby, Evernote, FM Radio, Gamestore, Lenovo Tab 2 A10, SHAREit, Skype, Sound Recorder, SYNCit HD, Tap the Frog HD, and WPS Office. So not a ton of apps here, and they are all uninstallable. And a few of these apps are really helpful, for instance the Evernote app for one. Speaking of installed apps, you also get a pretty decent amount of available space out of the box, around 9-10GB of storage. And there is a SD card slot, so you can add on even more. 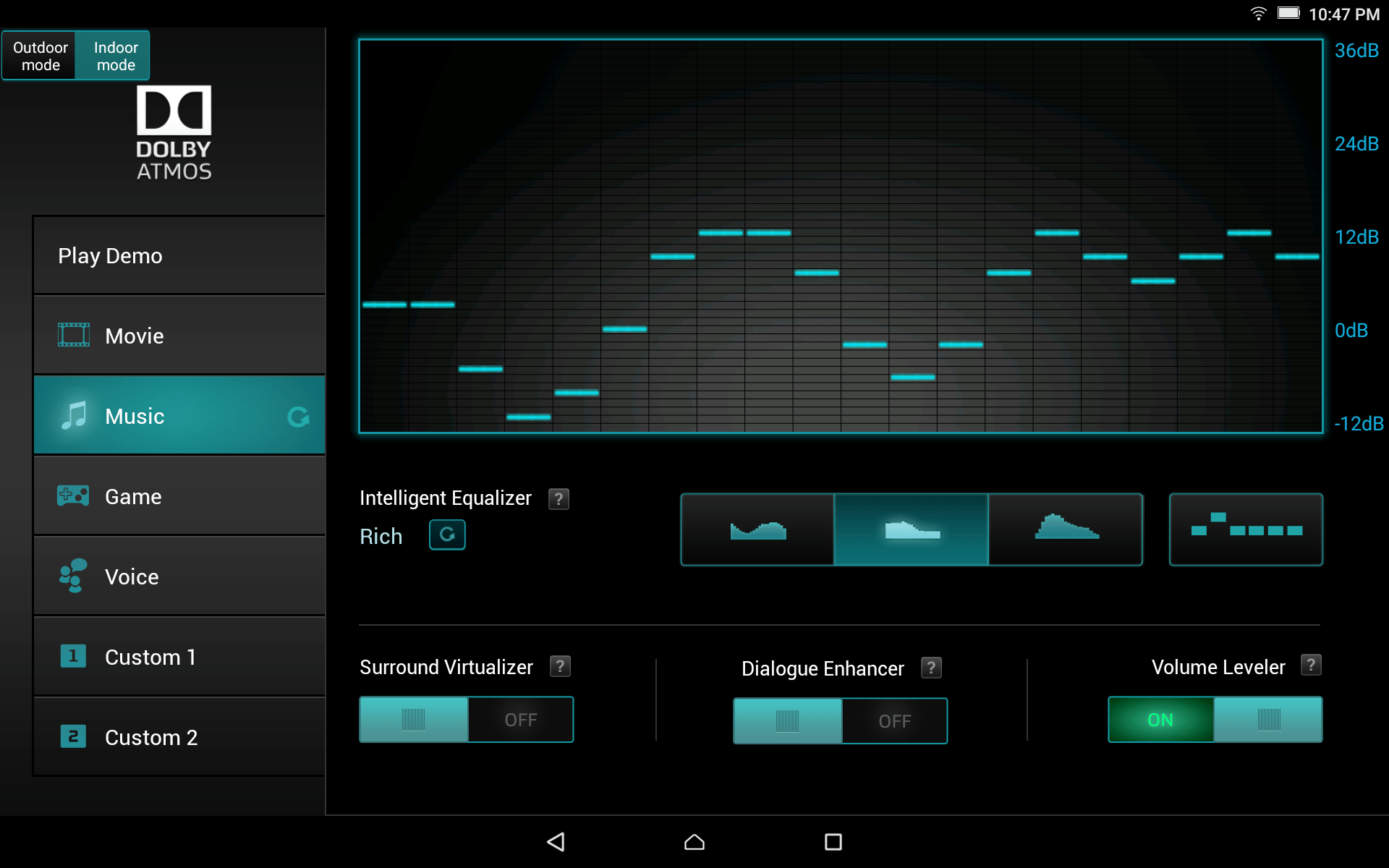 The Dolby app is actually pretty nice, it allows you to change the equalizer for movies, music, games, and more. There are also two modes. Indoor and Outdoor mode. That right there is something you don't always see on tablets or even smartphones. 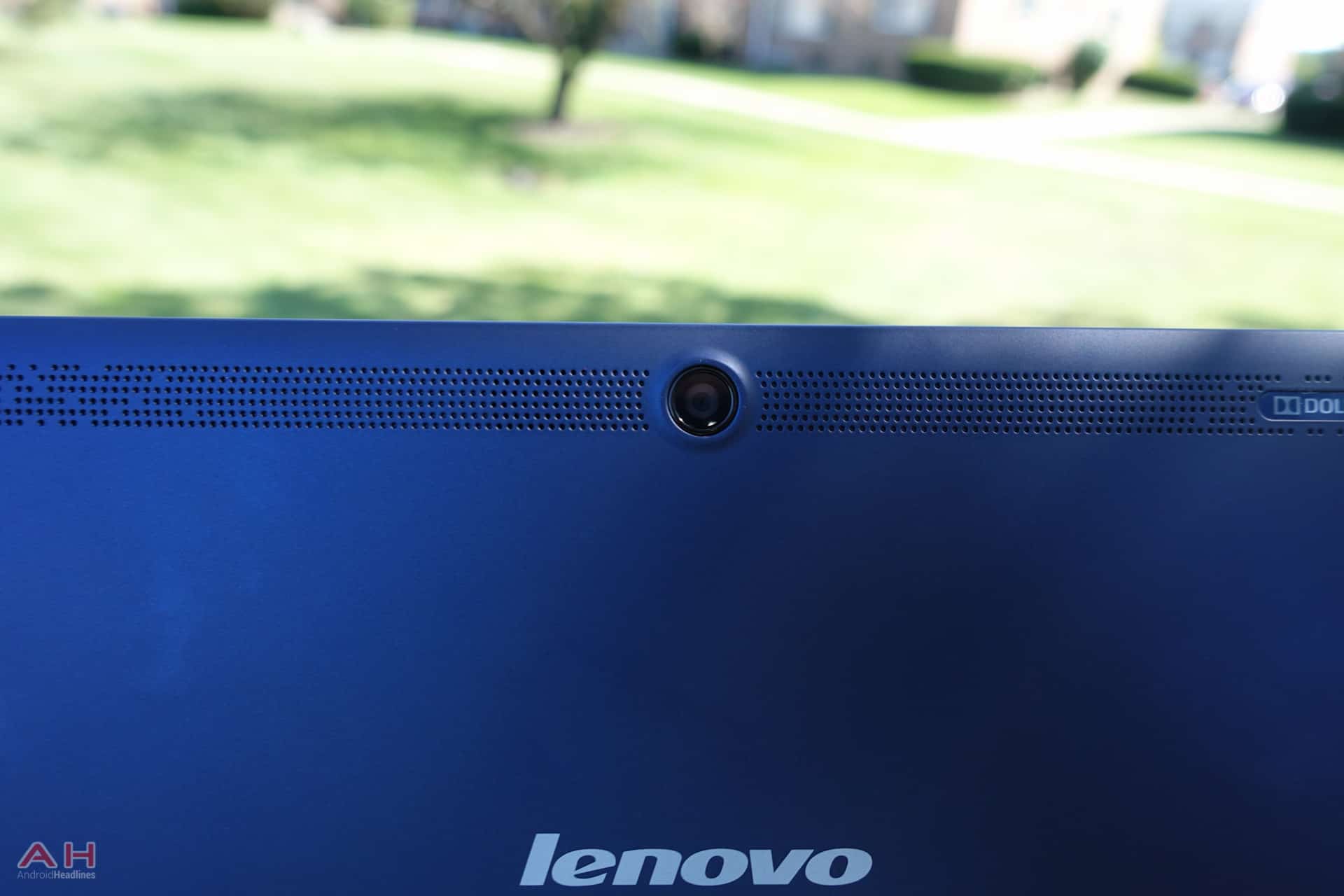 This probably goes without saying, but many of us hate using Tablets to take pictures. It just looks weird. Lenovo has put a 8MP camera here on the back of the Tab 2 A10, and the pictures are decent. I wasn't expecting anything mind-blowing here, but we do have some decent pictures coming from the device. You can see them all in the gallery down below. The front-facing camera doesn't seem to be as sharp as the camera on the rear of the device for some reason. But it should still do well for those selfies and doing video calls on Hangouts, and Skype.

The camera UI is quite simple too. It's not a mirror of what Motorola has however. On the left side you have all your different modes, and there are actually some cools ones here like Multi-angle mode, beauty face, Panorama, Live Photo, and PIP mode. With PIP Mode it basically is using both cameras at the same time. What it does is uses the front facing camera and takes a picture in puts it on top of the picture taken from the rear camera. It's cool, but not sure how often anyone would use it. To be honest.

Overall, I think the camera is adequate for most people, not bad, but not stunning either. If you're out at your kids Soccer game, you can use it to take pictures and get some decent ones, maybe. As is usual with tablet cameras, it doesn't grab moving objects all that well. 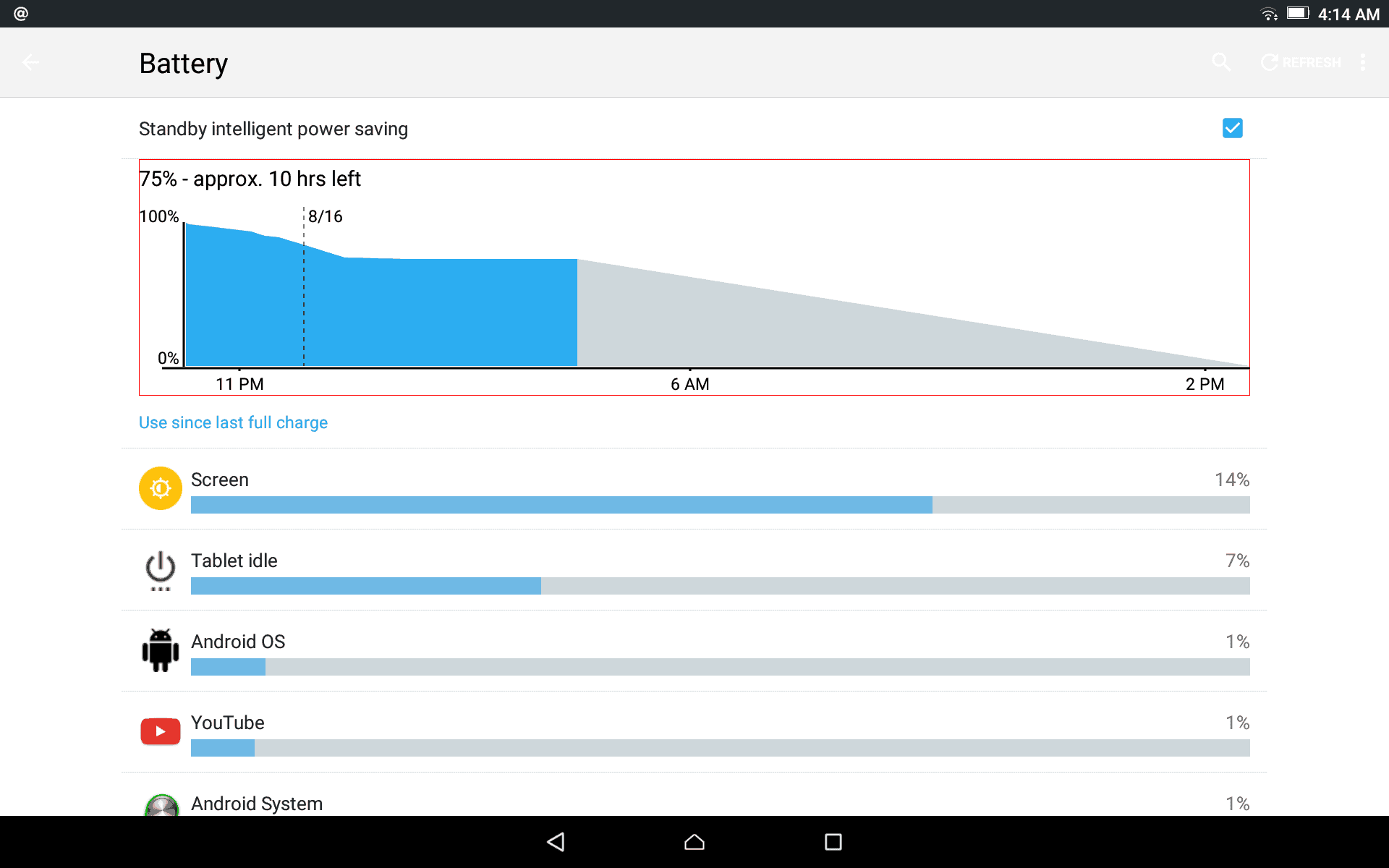 Inside we have a 7,000mAh battery. Pretty large battery, but also about the same as most other tablets around this size with these specs. For us, the battery has done pretty well. We did some gaming, browsed the interwebs and played with the camera a bit. And it performed quite well. You can easily get through a day with this battery. And Lenovo has been known for their great batteries in their tablets, so that's not really a surprise anymore. 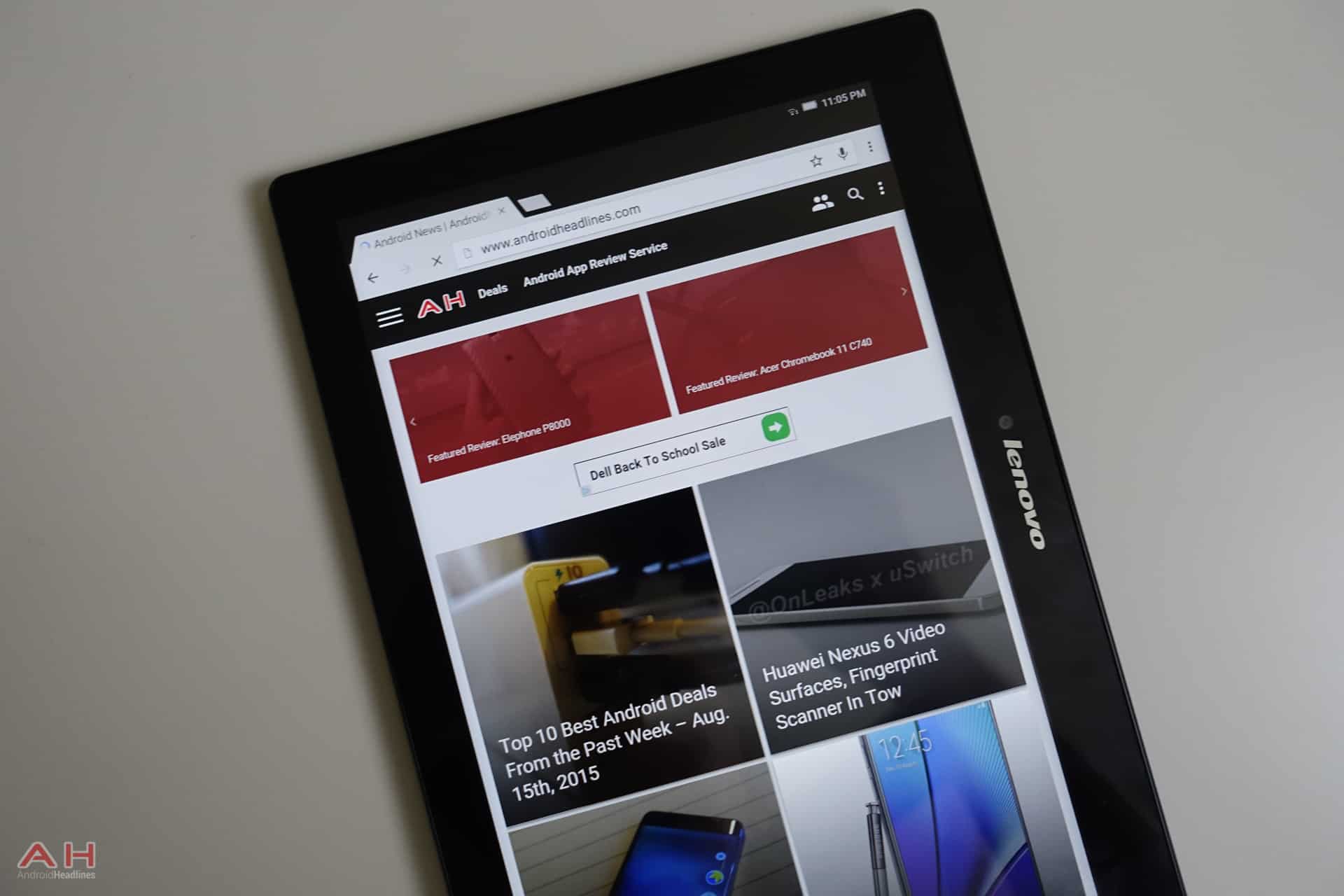 I actually really do like this tablet. If you are looking for a tablet just to have, then the Tab 2 A10 is a great one to pick up. If you are looking for one for productivity then the Dell Venue 10 7000 Series or the Sony Xperia Z4 Tablet might be a better fit. But if you're looking for one for entertainment then the Samsung Galaxy Tab S2 is a great choice. The Lenovo Tab 2 A10 fits into that low-price territory. It's a low priced tablet, that doesn't give you a terrible experience. Almost like the Moto G of tablets, which would make sense since it's the same company – technically.