You might be a sightly confused over the whole commotion that Google’s announcement yesterday caused, as it came without any notorious previous hint or any kind of warning. Google is now owned by a new company founded by the two visionary men that back in 1998 created the search behemoth known as Google. Larry Page and Sergey Brin will now be commanding Alphabet, a company that came to strip Google from several of its smaller branches such as Calico (which is mainly focused in lengthening the human life span), Nest (a company that manufactures smart home appliances and devices), and Sidewalk (which has a vision of reinventing the normal city model). Most of the media has focused on what the main goal of Alphabet will be, without mentioning how this move will affect Google itself. Well, prior to this rather surprising move by Google’s co-founders, the company’s overall core business was significantly slowing down, not stalling in any way, but just becoming somewhat stable, which motivated Larry Page to do something in order to change Google’s situation.

Larry Page has always said that “over time companies tend to get comfortable doing the same thing, just making incremental changes. But in the technology industry, where revolutionary ideas drive the next big growth areas, you need to be a bit uncomfortable to stay relevant”  Google was going through this phase, continuously explaining, but losing its relevancy. Google’s latest quarterly earnings report revealed two major elements, the first one being the growth change for the cost-per-click, which is a metric that advertisers pay each time their ad is clicked by someone if served by Google; and the second one being an annualized growth rate for paid clicks, which is based on the total number of clicks on an ad.

Even if the left-hand graph actually shows that the overall CPC number has decreased significantly for a few years now, Google has addressed this and said that it is due to a huge shift to YouTube-based ads, which has a less steep price for displaying ads. The righ-hand chart, revealed that although the number of paid clicks is still increasing inside Google’s own sites, it has decreased in the company’s partners’ websites. But despite these issues, Q2 2015 had a major increase in the growth of paid clicks, which as a result made the stock rise by more than 10 percent.

Alphabet will ultimately help Google’s future, as the company will now be able to focus on its ad network, which is Google’s main source of revenue. The new CEO at Google, Sundar Pichai, will surely focus mainly on finding a new strategy to keep helping Google’s core business to further grow. Giving Alphabet more funds to allow at least one of its many adventurous future projects expand enough to generate a stable source of income for the newly created company. 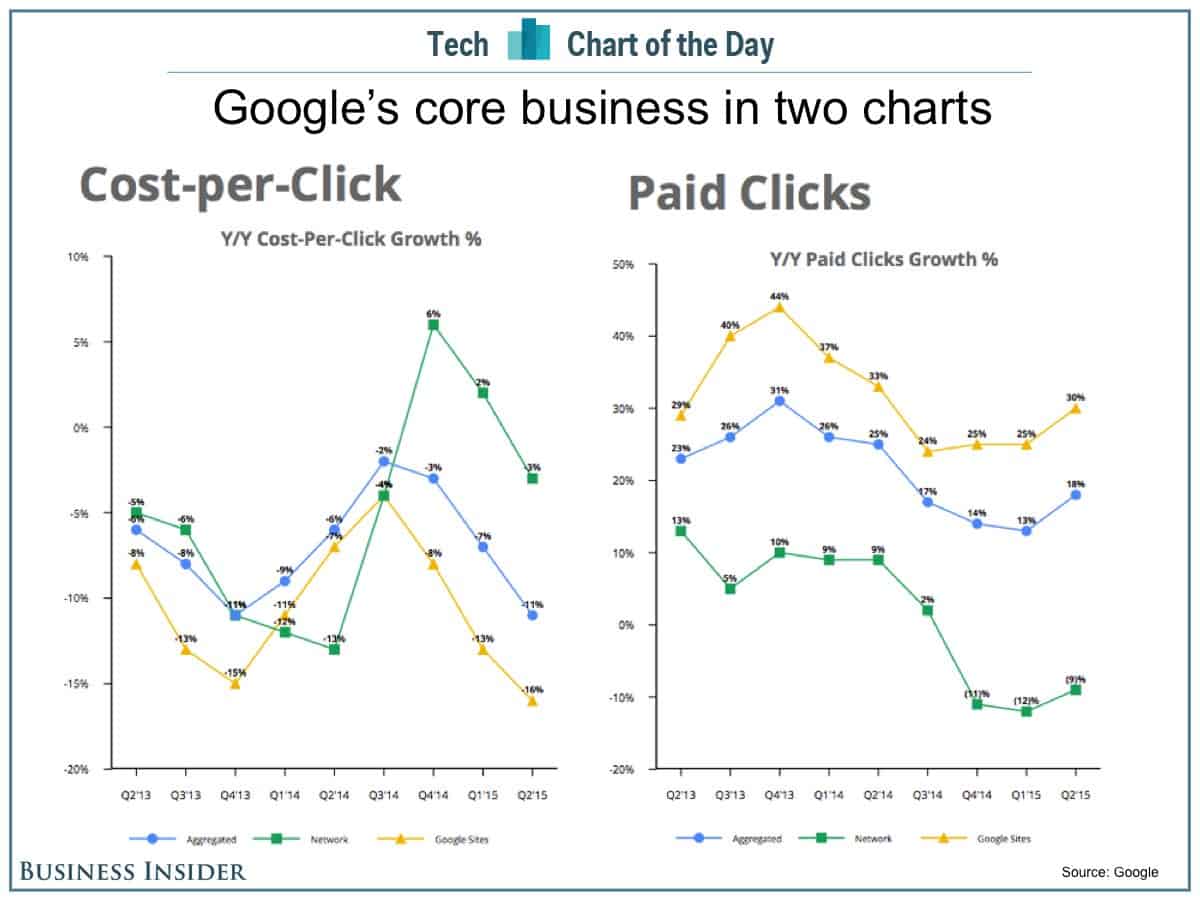