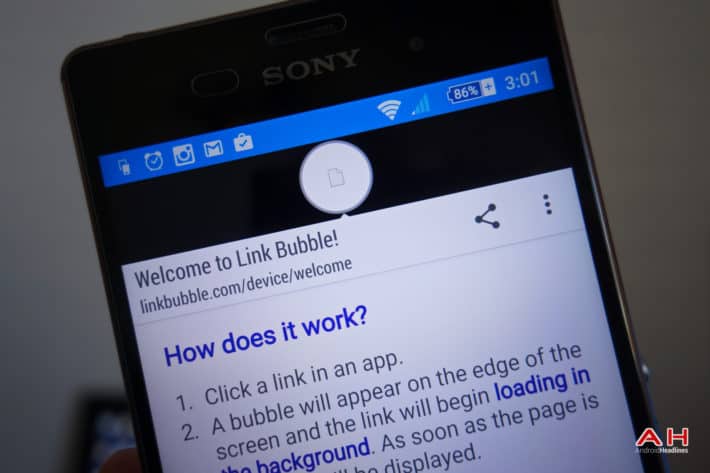 If you're a fan of apps like Link Bubble or Action Launcher 3, then you may be familiar with Chris Lacy. He's a well-known developer in the Android community with a collection of popular apps which not only have a tendency to make your homescreen and your device look better, but add some great functionality as well. To this day Chris Lacy states that he still regards Link Bubble as his best work, but in a somewhat surprising move Lacy has decided to sell Link Bubble as well as TapPath, and all included assets belonging to each application, due to his realization that he doesn't have the needed resources to bring Link Bubble to its full potential.

There is no mention of who purchased Link Bubble or TapPath or the assets but Lacy does state that it is all one company, who is a relatively new startup that he says is in "stealth mode" which is the reason why he isn't opening up about those details of the sale. In this regard, we'll likely learn about who purchased these two apps in due time whenever the company is ready to reveal what they have going. To that end, Lacy considers himself the world's most enthusiastic Link Bubble user, and it's that enthusiasm that has him looking forward to Link Bubble's buyers.

Although vague, Lacy says that it will be apparent why his level of excitement is so high for the deal once the founders announce the details. Although this will mean the near end of Lacy's development of Link Bubble, he's going out with a bang and is introducing the largest update Link Bubble has ever seen with a whole bunch of improvements including a material design overhaul, as well as other new features like colored toolbars, custom domain redirects, HTML dropdown elements, and six new added language translations. Lacy mentions that existing users will get to keep any associated purchases as they're tied to their Google accounts, so there should be no worry about losing anything if you have the pro version of Link Bubble or if you've purchased TapPath. If you're unfamiliar with Link Bubble, it's basically a browser application that allows web pages to load in the background after tapping links inside of apps. What this does is let users continue using the app they're in until the page is finished loading up, at which point the page animates into view. TapPath on the other hand essentially tells your device how to treat links. For example, you can single tap to open the link, and double or triple tap to share those links with family or friends. If you're an avid user of either of these apps, it seems like there is going to be some exciting days ahead.