During its WWDC 2015 keynote, Apple announced a ton of new things which would be of importance for iOS users, but one unexpected announcement took Android users by total surprise and prompted a number of responses on social media ranging from disbelief to disdain and everything in between. The announcement of course, had to do with the upcoming launch of Apple’s new streaming music service, Apple Music, which will also be made available on Android. The very thought that Apple could actually launch an app for any mobile platform other than its own, would have been well-nigh impossible in the Steve Jobs era, but has now become very much a reality in the Tim Cook era. While the company already offers its iTunes and Safari programs on Windows, it has thus far diligently stayed away from releasing its software offerings on the Android platform.

Carrying on with its new-found appreciation for competing platforms, Apple has now posted a job listing on its site, seeking Applications Software Engineers experienced in developing Android apps. The preface to the listing says, “We’re looking for engineers to help us bring exciting new mobile products to the Android platform”. To be qualified for the job, candidates must have a Bachelor of Science or equivalent degree in computer science. They will also be required to have a minimum of 6 years of software development experience, and will need to have “expert knowledge” of Java. The applicants should also have a “broad experience in Android application development”, while knowledge of C++, Objective-C or other languages would be a plus, according to the listing.

Apple’s earlier announcement to develop for Android is being widely interpreted in the media as a move right out of Google’s service-based model of business to compete with platform-agnostic streaming services like Spotify and Pandora, among others. While not a core app like Mail, iMessage, Maps or calendar, it still signifies a significant move forward from the seemingly pragmatic CEO, who had earlier in 2013, announced that he’s got no issues in porting iOS apps to Android if that made business sense. Mr. Cook has also been praised widely for putting a thaw to Apple’s long-standing legal tussle with Samsung and indeed, extending an olive branch to the company by picking it over TSMC to manufacturer the company’s A9 mobile chips for its next generation smartphones and tablets. 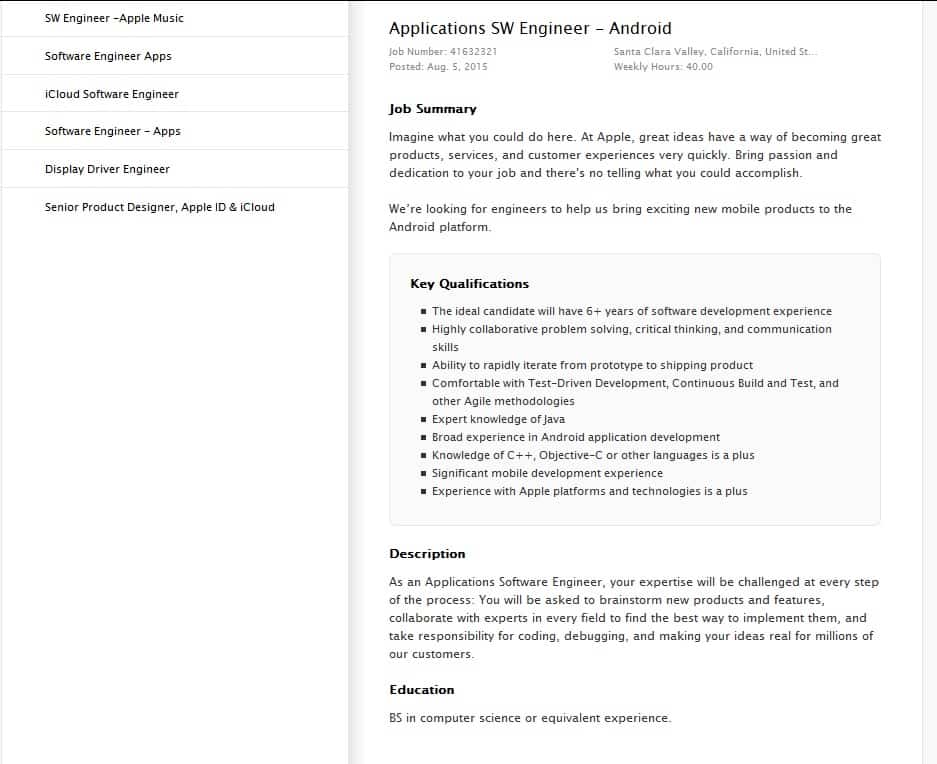