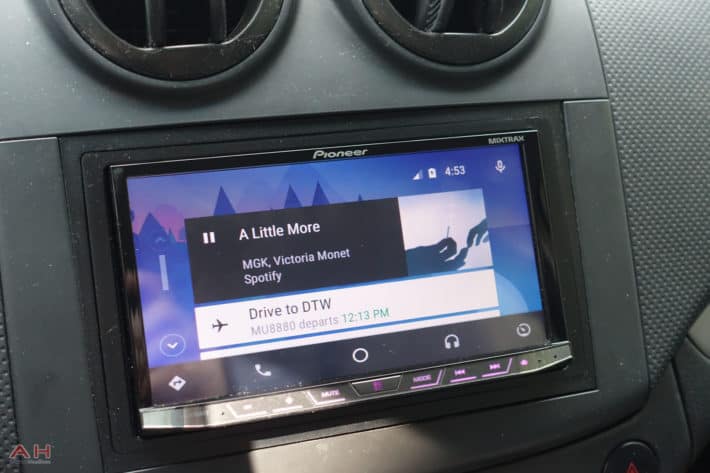 Google pushed out an update for the Android Auto companion app today. There aren't too many changes this time around, but there are a few visual changes, that actually look really nice. It's basically all in the overview screen. Which for those that haven't used Android Auto before, it's basically like Google Now. It'll show destinations that you've searched for on Google Maps, as well as messages you have on your phone, and navigation and music. Up until today, Music and Navigation were just one long rectangle. Now it's been updated to be about twice as big. Functionality hasn't really changed, but now you have bigger touch targets.

While functionality hasn't really changed, there is a bit more information on these cards now. For instance with the Navigation card, you now see what time you will arrive at your destination. A subtle change, but still a change, and one I think everyone will like. Now on the music side, it now shows you a bigger album art, but also instead of it being "Artist – Google Play Music", they are on separate lines. Making it easier to read. Although if you're driving you shouldn't be reading that anyways.

Other than that, there doesn't seem to be any huge changes in this new update to the Android Auto companion app. We'll keep our eyes peeled and see what else is new in the APK over the next few days, as we use Android Auto a bit more. It's great to see Google making some visual changes here. One that I'd really like them to change is the scrolling menu. While it's nice to have larger touch targets in the car, it's not a good idea to have a scrolling list. Hopefully those Googlers can find some other way to do it in the near future.

Android Auto is still in its infancy, and it's quite obvious. But updates like this are definitely welcome. Very excited to see what Google has on tap for Android Auto in the next few years. We've already seen it make its way into a variety of cars, both built-in and after-market units.