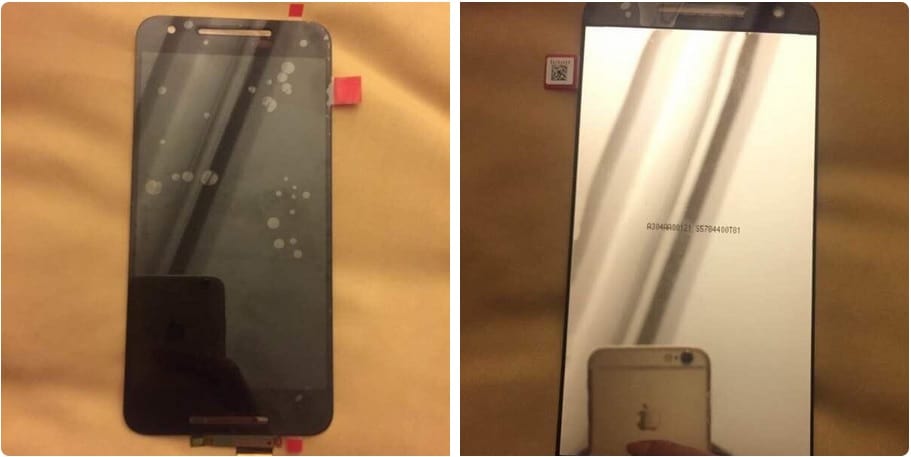 By now, just about everybody seems to know that this year's Nexus release will not be a single smartphone unlike that of the first six years. This time around, Google is said to be launching two separate Nexus devices. While one is believed to be made by LG on lines of the Nexus 5 from a couple of years back, the other one has been tipped to be built by one of the largest Android device manufacturers in the world – Huawei. Multiple leaks over the past several weeks have already given us some idea about what the two devices are going to be like. Now we've seemingly got ourselves yet another leak, with a Twitter account holder, who goes by the handle @manu09090, having just put up two images of a smartphone display panel that he claims is from one of this year's Nexus devices.

As for the images, the poster didn't seem too certain as to whether the images were of the LG device or the one being made by Huawei. However, leaker extraordinaire @OnLeaks, otherwise known as Steve Hemmerstoffer, the founder and Editor-in-Chief of nowhereelse.fr, has just weighed in on the debate and declared the leak as legit, by claiming that it belongs to the device being prepped by LG. Virtually giving the images a certificate of authenticity, he posted, "Well, same camera and sensor position as on my leaked render = legit #LG #Nexus #Nexus5".

As per latest rumors, the LG Nexus is said to feature a 5.2-inch display with 2K resolution and said to be powered by a Qualcomm Snapdragon 808 chipset. It is also believed to come with 3 GB of LPDD3 RAM and feature a 13-megapixel Sony IMX278 sensor as part of its primary camera. Earlier rumors have also suggested that the smartphone will come with a fingerprint scanner, and will have support for wireless charging out of the box. It will reportedly feature a fully metallic frame, but the back-cover will apparently still be made out of plastic.

As for the Huawei-made Nexus, the device is rumored to be the more premium of the two upcoming devices. The smartphone will allegedly feature a 5.7-inch WQHD AMOLED display and a fully metallic unibody design. The handset will allegedly come with a 21-megapixel primary camera with Sony's IMX230 sensor, and have support for wireless charging. Of course all this is mere conjecture at this point in time, so a generous pinch of salt might well be in order.