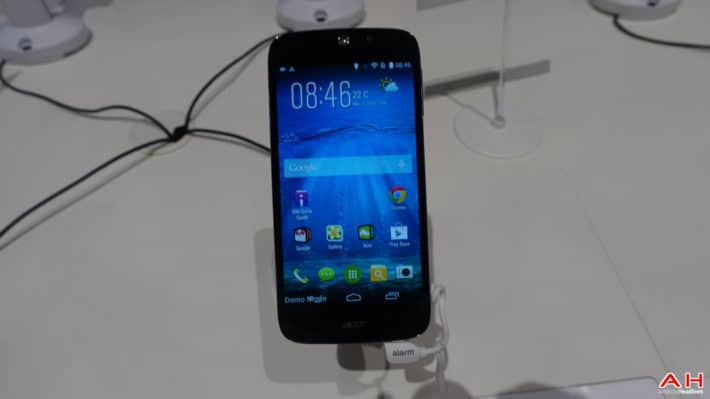 When it comes to smartphones, many of us probably don't think about Acer as a smartphone manufacturer. But they do make smartphones, although they are usually left in Europe and never make their way over to North America. Acer has announced, this morning, that they are bringing their Liquid Jade Z and Liquid Z410 smartphones over to the US. The Liquid Jade Z will have a starting point of $229 and the Liquid Z410 at $129. So pretty low prices here.

The Liquid Jade Z has a 5-inch HD display. It also features zero air gap technology. What this does is it reduces unwanted reflections, especially nice for when you're using the device outdoors. They have a 13MP rear-facing camera with a f/1.8 aperture. It's also a voice-activated camera, something we've been seeing more and more of recently. We're also looking at a MediaTek MT6732 processor, which is a 64-bit, 1.5GHz quad-core chip. Paired with either 1GB of RAM and 8GB of storage or 2GB of RAM and 16GB of storage. Both models will be available here in the US for $229 and $249 respectively. There is also a microSD card slot capable of extending the storage by another 32GB. We're also looking at a 2300mAh battery here, to get you through the day.

On the other hand, the Liquid Z410 is a 4.5-inch smartphone. With a 960×540 resolution display. It's important to remember that this phone is going to cost just $129, so the specs aren't going to be high-end. We're also looking at a MediaTek MT6732M processor, which is also 64-bit, but clocked at 1.3GHz and is quad-core. Acer has also gone with 1GB of RAM and 8GB of storage or 2GB of RAM and 16GB of storage, which will cost $129 and $149 respectively. For cameras, we have a 5MP rear-facing shooter, and a 2MP shooter around front. All powered by a 2000mAh battery inside.