Skip to content
Trusted By Millions
Independent, Expert Android News You Can Trust, Since 2010
Publishing More Android Than Anyone Else
15
Today
15
This Week
531
This Month
3582
This Year
121202
All Time

Xiaomi has announced a number of smartphones this year, including the company’s Mi Note and Mi Note Pro flagships. One of the devices Xiaomi released earlier this year is the Mi 4i smartphone, a device which launched in India first. This is a mid-range smartphone which features solid specifications and is really affordable. The device has become available in some additional Asian markets since then, and it seems like Xiaomi might be cooking up another variant of this handset, let me explain.

We’ve seen a Xiaomi ‘Libra’ device leak quite recently, the leak said that the phone will be powered by the Snapdragon 820 SoC, and that it will pack a number of high-end specs. Well, it seems like that leak was completely off. A Xiaomi ‘Libra’ handset has been benchmarked on Geekbench, and it seems like this will be a mid-range smartphone. The listing says that the phone will be powered by the Snapdragon MSM8992 SoC, in other words, you’ll be able to find the Snapdragon 808 on the inside. The Xiaomi ‘Libra’ will also pack in 2GB of RAM, and will ship with Android 5.1.1 Lollipop pre-installed with Xiaomi’s MIUI OS installed on top of it.

That being said, this is clearly not a high-end handset previous leak(s) have been suggesting, but a mid-range offering by Xiaomi. According to additional rumors from China, this might be the higher-end Xiaomi Mi 4i variant, and it might be called the Mi 4i Pro or something to that effect. Take this info with a grain of salt though, we’re still not sure how accurate it is.

Xiaomi has recently expanded to Brazil, and the company plans to start manufacturing devices in India before the end of the year. This Chinese smartphone OEM still has to release a couple of devices before the end of the year, like the Redmi Note 2 and Mi 5 for example. This mysterious handset will join Xiaomi’s lineup as well, and by the looks of it, that might happen soon. Either way, we’ll let you know if new info surfaces, so stay tuned for that. 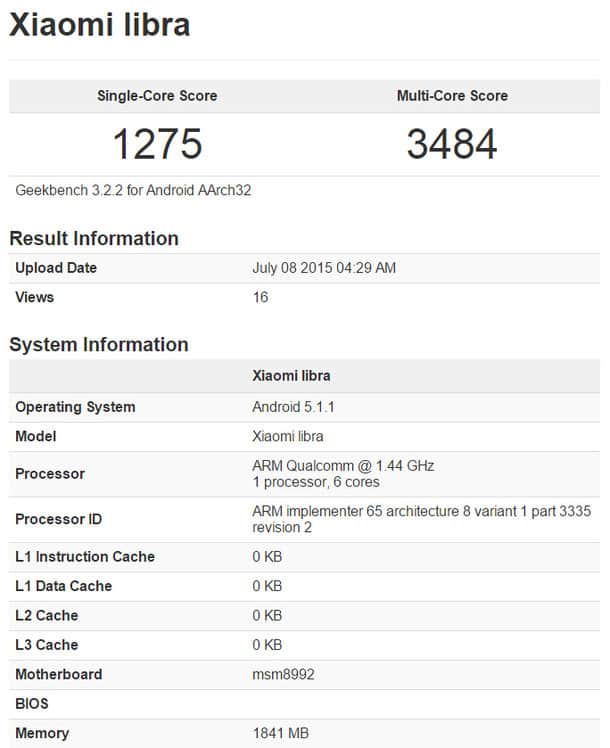