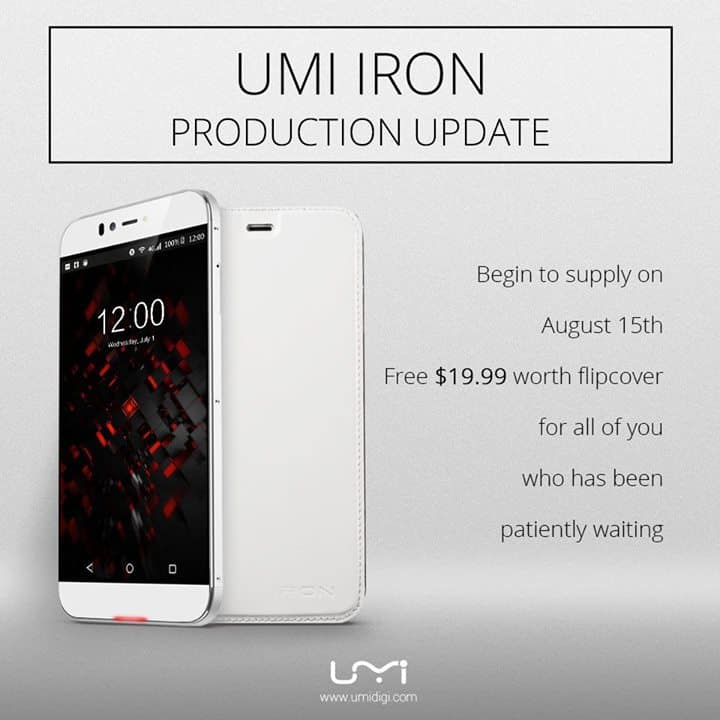 UMi has announced a very interesting smartphone a while back, the UMi Iron. This Chinese smartphone OEM has managed to get the attention of consumers with this device, and they've apparently received quite a few pre-orders for it. The UMi Iron is running Android 5.1 Lollipop, an almost stock version of the software. The device sports a 5.5-inch 1080p (1920 x 1080) LTPS display, along with 3GB of RAM and 16GB of expandable internal storage. This smartphone is fueled by MediaTek's MT6753 64-bit octa-core processor which seems to be very popular with Chinese OEMs these days. There's a 13-megapixel camera available on the back of this device (Sony's IMX214 sensor), and the device is made out of metal.

That being said, the UMi Iron has been available for pre-order for quite some time via various Chinese resellers, and was supposed to ship out to consumers in mid-July. The company has postponed shipments for a few days, and didn't really give out a reason why, but it seems like the availability of UMi Iron just got some further delays. UMi has released some info on their official Facebook page stating that the pre-ordered UMi Iron units will ship out on August 15th, and as an apology for the delay, you'll get a $19.99 worth flip cover for free. Those who pre-ordered can cancel their order by contacting the reseller they bought the device from.

What's the reason for the delay? Well, it seems like UMi has had some issues gaining root access to the device. They've finally managed to do it, but in order to fully polish the experience and compatibility with the company's RootJoy tool, they need at least two more of testing before they ship the device out to consumers. You'll be able to flash all sorts of ROMs on the UMi Iron via RootJoy, including CM and MIUI for example. There you have it, the UMi Iron shipments are delayed at this point and will ship on August 15th. This news will quite probably irritate some users which pre-ordered the device, but UMi apologizes and will bundle in the aforementioned Flip Cover. Stay tuned for more info.