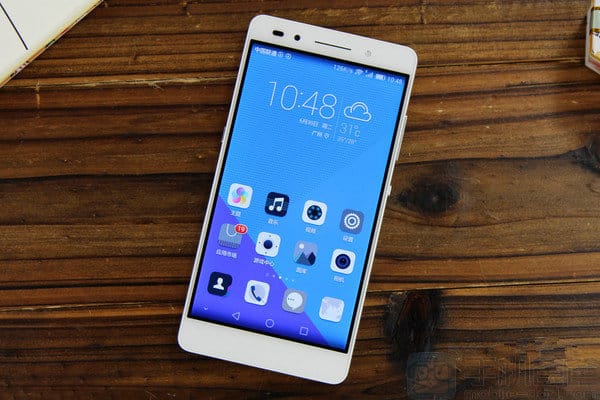 Huawei has held an event in China yesterday during which the company announced some new devices, including their frequently leaked Honor 7 handset. This smartphone has been popping up all over the internet for the last couple of weeks, and the company has finally unveiled it yesterday alongside the Honor Band Zero Smartwatch and Honor Whistle Headset. The Huawei Honor 7 is a high-end offering by the company, a phone made out of metal. We've already covered the original announcement of this handset, and are here to share some hands-on images of the phone with you, as well as talk about the design of the device.

If you take a look at the gallery down below, you'll notice a bunch of Honor 7 real life images. We shared a ton of official Honor 7 renders yesterday, but now we have hands-on images directly from China thanks to the source. Anyhow, as you can see, the Honor 7 is made out of metal, and it actually resembles some of Huawei's previously released handsets. The Huawei Honor 7 sports rather thin side bezels and has no capacitive buttons on it. The Fingerprint scanner is located on the back of this handset, right below the camera sensor. This thing offers dual speakers which are located on the bottom part of this device, and in-between them you'll find the micro USB charging port.