It’s still a few weeks away from the launch date of Samsung’s Galaxy Note 5 device which has been rumored to be unveiled on August 12th with a possible purchase availability date of August 21st, but even though the launch may be close that hasn’t stopped the leaks from surfacing. Previous rumors have pegged the device as having a total of 4GB of RAM at its disposal, and in this latest leak it appears that those rumors may be true. There’s still much that isn’t officially known about the Galaxy Note 5, but a screenshot showing the phone being run through the CPU-Z application gives off some key details which could point to some of the actual hardware Samsung may end up using for the device.

The system information tab appears to reveal the presence of 4GB of total RAM, which still isn’t confirmed but also shouldn’t surprise too much since this has been rumored before. More importantly though, the information also points out the Samsung Galaxy Note 5 is running on Samsung’s Exynos 7422 octa-core CPU. It’s worth noting that this is listed as the SM-N920F model which is said to be the international model of the device. Alongside the RAM and CPU details, it’s also listed that the Galaxy Note 5 will come equipped with a 5.69-inch display, which is more than likely going to be carrying a Quad HD resolution and will be a SuperAMOLED panel.

According to the leaked image the Galaxy Note 5 will come running Android 5.1.1 Lollipop at launch, and will sport a screen density of 480 DPI, along with 32GB of total internal storage space. The use of the Exynos 7422 CPU means that the Galaxy S6 Edge+ could also be using the same exact processor, which is rumored to be getting an announcement alongside the Galaxy Note 5 next month. It’s been previously rumored the Galaxy Note 5 might be using this version of Samsung’s most recent chipset, so this leak appears to support those previous rumors, but keep in mind this is all but confirmed on Samsung’s end so far. A recent leak of the alleged Verizon Wireless model of the Galaxy Note 5 surfaced on Geekbench showing the same amount of RAM, although it didn’t list exactly which processor it would be using, merely that it would be an 8 core CPU clocked at 1.5GHz. 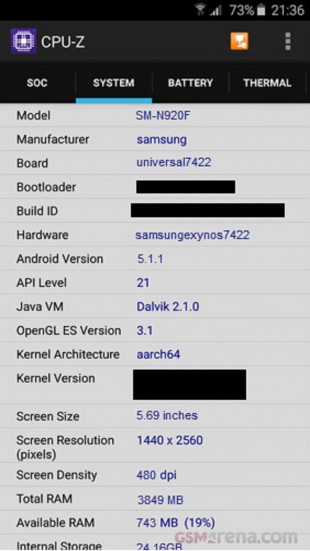