There was a time when one of the most popular form factors of phones was the so-called flip-phone or 'clamshell'. It started when the Motorola RAZR hit the markets and consumers could see the benefit of having an extremely thin device for that time and a large screen on the inside, plus, with the outer screen, users could see their messages or other notifications or even take primitive selfies, as they would see themselves on that small and low-res screen. Of course, some improvements were made by increasing the resolution on both screens, making these devices even thinner and further including some touch controls to the screen on the outside. There were other phones that used this form factor dedicated to texting, as they included a full QWERTY keyboard, but usually their specs were not very good and the design choices were aesthetically questionable.

Then, touch screens became more popular and the variety of form factors available was reduced significantly, basically, becoming rectangular slates with large screens covered with glass, a camera on the back and a few hardware buttons here and there. Of course, operating systems evolve and are meant to be used by touching its elements on the screen. Still, Samsung is one of the companies that does not seem to want to let the former form factor to go away, as they have released a few of these and all running on Android OS.

Now, a new flip-phone with Android 5.1 from Samsung has been leaked. It is called the Galaxy Folder and its model is SM-G150N for its LTE version and SM-G155S for the 3G version. Some specs can be seen, like the dimensions being 122 x 60.2 x 15.3 mm and a weight of 155 grams. The processor is quad-core and clocks at 1.2 GHz, while the device also comes with 1.5 GB of RAM. In terms of the display, the screen measures about 3.8 inches with a resolution of 800 x 480 pixels. The main camera has a resolution of 8 megapixels and there's a secondary one with a 2-megapixel resolution. There's a removable 1,800mAh battery and the internal memory is only 8 GB, expandable to another 64 GB. It's expected to be available in South Korea and seems unlikely to be released in other markets. 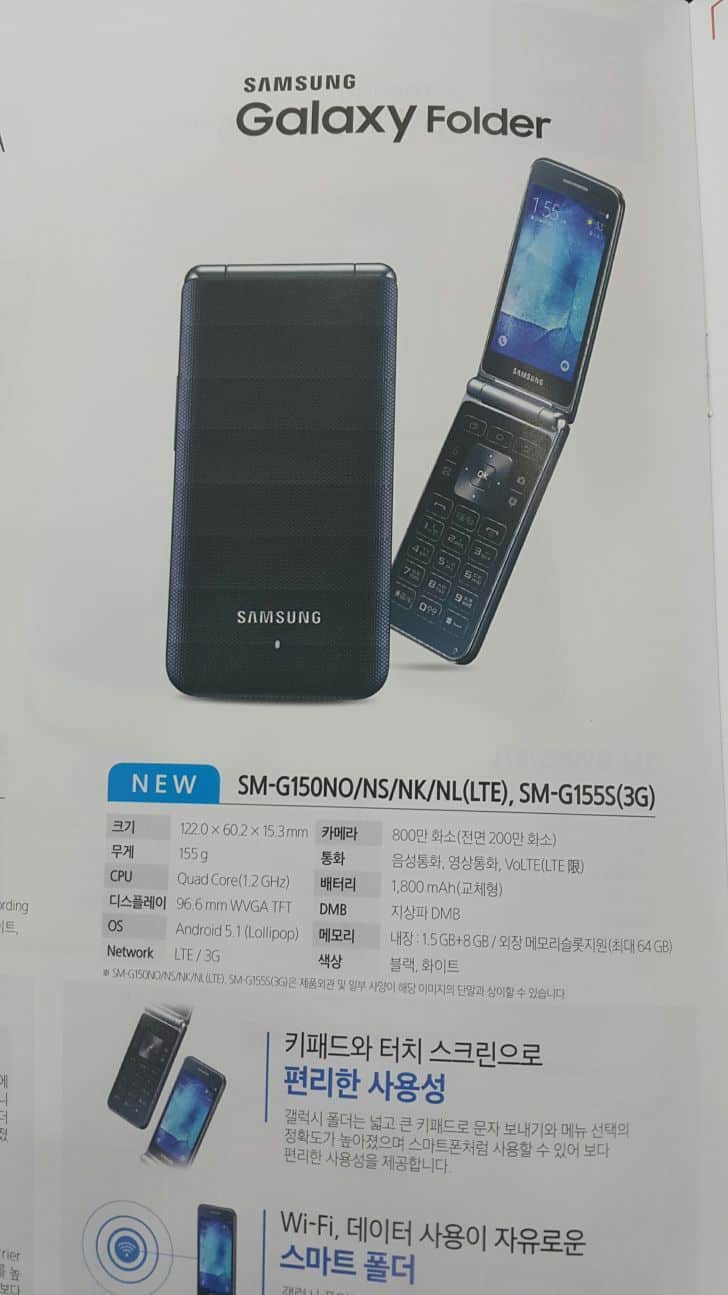 Sponsored Video
Advertisement
Trusted By Millions
Independent, Expert Android News You Can Trust, Since 2010
Publishing More Android Than Anyone Else
1
Today
59
This Week
218
This Month.
218
This Year
110409
All Time
Advertisement