Samsung eventually announced the Galaxy A8 on July 15th after numerous leaks, which had already disclosed just about everything there was to know about the device. While the company didn't reveal the price initially, it has now been leaked on Chinese website CNMO. The device will reportedly cost 3,199 Yuan ($515) for the 16 GB version and 3,499 ($564) for the 32 GB variant when it finally launches for sale in China reportedly later this month. The prices are keeping in line with previously leaked pricing in Malaysia, where the device is rumored to be priced at $500. While Samsung hasn't yet made public its broader international plans for the Galaxy A8, it is highly likely that the company will launch the device globally sooner than later. The Galaxy A8 is said to the slimmest smartphone ever from Samsung's stables at just 5.9 mm of thickness. The device will measure 158 mm by 76.8 mm, giving it a screen-to-body ratio of almost 74 percent.

Coming to the hardware specifications of the smartphone, it features a 5.7-inch 1080p Super AMOLED display with a pixel density of 386 dpi. The device is powered by Qualcomm's Snapdragon 615 chipset, which comes with an integrated 64-bit octa-core CPU clocked at a maximum of 1.5 GHz and an Adreno 405 GPU. The handset comes with 2 GB of RAM and 16 or 32 GB of internal storage, depending on the variant. Both the 16 and 32 GB variants however, will have microSD card slots to provide additional storage. There will be a 16 megapixel ISOCELL camera on the rear of the device, while the selfie-cam on the front will come with a 5 megapixel sensor. The phone will be carrying a 3,050 mAh battery, while Android 5.1 Lollipop will be pre-installed with Samsung's proprietary TouchWiz interface laid on top. Connectivity options will include both FDD-LTE and TDD-LTE along with dual-band Wi-Fi, microUSB 2.0, Bluetooth 4.1 and NFC.

As for the new A-series, Samsung has been trying to clean up the chaotic nomenclature of its entry and mid-range devices with the introduction of two distinct lines of smartphones – the entry-level J-series and the mid-range A-series, to go along with its premium S-series offerings. While the company has already launched a number of A-series handsets in China, the A8 is by far the most premium of all the offerings thus far. The company has also launched a number of its J-series handsets in emerging markets like India and China in recent times and more such devices are said to be in the pipeline, to be launched in the second half of the year. The image that forms the basis of this report can be seen below. 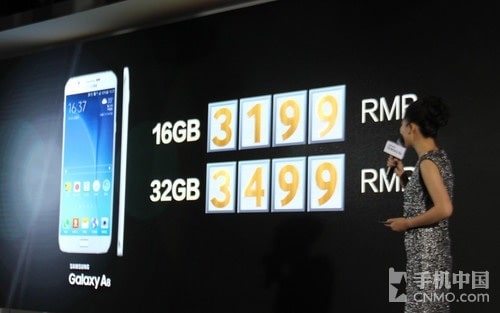