Rumors of a Blackberry device powered by the Android operating system have been floating around for a while now, but just over the last few weeks to a month things have started to take shape. There is now a rumored name for the device which is currently being referred to as the Blackberry Venice, and earlier today one of the latest rumors suggested that the device would be headed to AT&T for an official launch later this year in November, touting specs like a possible 5.4-inch screen with QHD resolution and a Qualcomm Snapdragon 808 Processor. Those pieces of hardware are all but confirmed of course, but should they end up in a launch phone it places the Blackberry handset to be in between mid-range and high-end phones.

The latest leak which seems to have surfaced just in the last hour, is not about leaked specs but rather a leaked image which presumably shows a small portion of the upcoming smartphone. If the image is to be believed then in true Blackberry fashion it comes with a full QWERTY keyboard just below the region of the display, but it also shows off the very noticeable and distinguishable Android Lollipop navigation buttons, as well as a very familiar Android touch keyboard, like the stock Google keyboard which comes on mostly any Nexus.

For now this is the most clear and defining picture we have seen of what Blackberry’s efforts are in building an Android-powered smartphone, and it’s hard to gauge how customers might feel about a full QWERTY keyboard in an age where most consumers and smartphones users are now accustomed to a full-touch interface. If the November launch date turns out to be true, then it won’t be too long before Blackberry actually unveils the phone officially, assuming they actually have an Android device in the works to begin with. All signs have been pointing to yes with ever more certainty, but for the time being everything should still be taken as a rumor until either the carriers or Blackberry themselves announce the phone’s existence. This image doesn’t give off too much detail in terms of the full design, but it may be just enough to capture more interest. 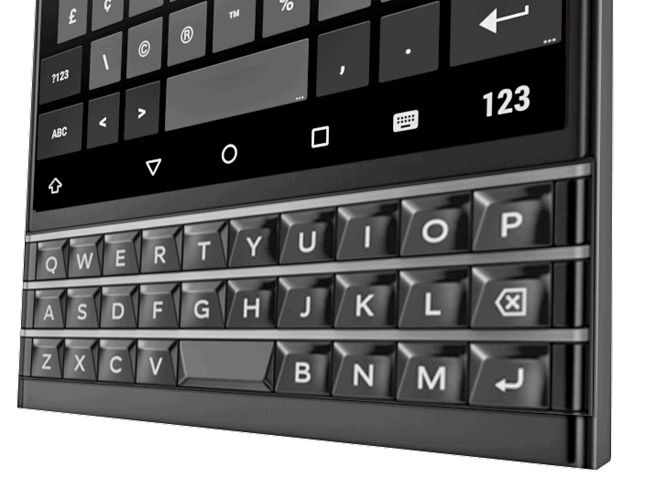