Like with the introduction or unveiling of any product, when an Apple product launches, the market is watched from all angles. Looking to see how well the Apple product does, what impact it has and who is affected. This was exactly the case with the launch of their latest device, the Apple Watch. That said, when Apple released their recent figures, they conveniently omitting much mention of the Apple Watch, how it was doing and what the impact of its arrival was. Well, that does not mean that analysts have not been doing their rounds of number crunching or coming up with the data that they feel represents the markets.

Strategy Analytics is a research company who routinely provides information on the landscape of the mobile world and all things related. As such, they have now released a report which seems to suggest that the Apple Watch has had a massive impact on the smartwatch market and in particular, on Samsung’s share of the market. Prior to the Apple Watch launch, Samsung was considered to be the biggest smartwatch manufacturer going. This was not that surprising when you take into consideration how many smartwatches (and similar) the South Korean company manufactures.

According to Strategy Analytics, dating back to Q2 of 2014, Samsung occupied a very healthy 73.6% of the market. However, since then and largely expected to be as a result of the introduction of the Apple Watch, Strategy Analytics are now suggesting that Samsung’s overall smartwatch market share for Q2 of 2015 has slumped down to only 7.5%. Of course, this does not necessarily mean that Samsung are not selling any devices but is more likely the case of the overall market growing so much due to the Apple Watch. This combined with those opting for the Apple Watch over a Samsung smartwatch has resulted in what is essentially a slashing of their market share. That said, Samsung do remain the second biggest smartwatch manufacturer with their 7.5% and the prediction that Samsung shipped 0.4 million smartwatches in Q2.

In total, Strategy Analytic’s data states the Q2 figure for smartwatches was in excess of 5 million. Of that, Apple captured a whopping 75% which totals roughly 4 million devices. To put the four million into perspective, there was apparently only 4.6 million smartwatches shipped in the whole of 2014. Of course, going forward, all eyes will again be watching Samsung when they release their highly anticipated next smartwatch, the Samsung Gear A. It will be interesting to see if they can impact what seems to be a very dominant Apple Watch over the last three months. 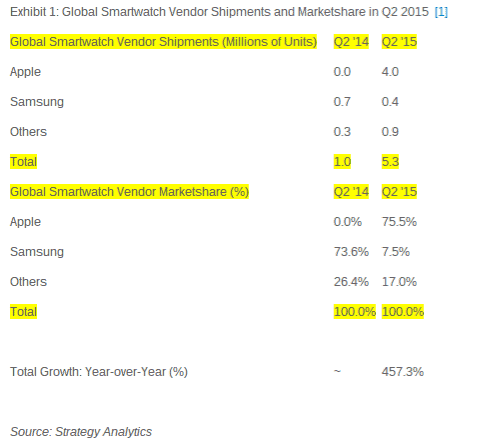