Skip to content
Trusted By Millions
Independent, Expert Android News You Can Trust, Since 2010
Publishing More Android Than Anyone Else
22
Today
151
This Week
389
This Month
389
This Year
118310
All Time This morning some very interesting news came down the wire pertaining to Google, mobile payments and Google Photos. In short, Google released a video on YouTube which clearly suggested that Google Photos, somehow, might be able to be used as a payment solution. The video even came with the hashtag #paywithaphoto. As such, the speculation immediately began that this might be something to do with their latest mobile payments solution, Android Pay.

Well, as quickly as the news broke, it now seems to becoming clear that it is unlikely to be anything to do with paying for goods with Google Photos or anything to do with payments at all. Instead, it seems the truth is far more basic and simply a promotional campaign set up for Google Photos. According to Droid Life, Google has been in touch with them and advised that starting July 29th, a sort of Google Photos Food truck will be passing through certain major cities in the U.S. Android device owners in those cities will be able to go down, join the food truck and essentially use Google Photos to enter competitions and win various prizes. Therefore, paying for something with a Photo. According to the details, users will be asked to use the Google Photos search function to find a photo within a specific timeframe. Those who can do it have a chance of winning a prize.

As noted previously, the fun and games all begins on July 29th in New York and it would seem the truck will be then heading on to Portland, Los Angeles and finally Austin. To further confirm that this is more of a Google Photos promotional campaign than a payment solution or feature, Google Photos have recently sent out a tweet on their twitter account, stating that they will leave payments to Google Wallet. Further adding “Next week is all about wafels and photos.” So, there you go. You won’t actually be able to pay for anything with a photo, although, if you are in any of the cities listed and find the truck, you might be able to #WinWithAPhoto. 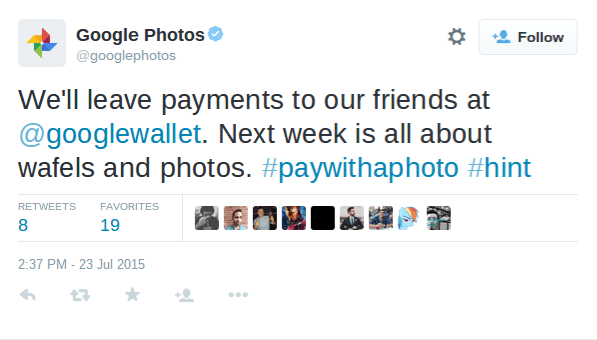