With just over a week to go until OnePlus launches their follow-up device to the OnePlus One, the OnePlus 2, the speculation around the device is massive. Of course, OnePlus has not been shy in letting the world know what is coming with the OnePlus 2 and have been periodically releasing detailed specs prior to the launch. As such, a number of the main specs have already been confirmed. That said, not everything is known and there are still a number of questions waiting to be answered.

Well, online retailer Oppomart have begun listing the OnePlus 2 on their site. To be clear, the listing was noted a few days ago, although at the time a number of the specs were incorrect including the RAM count. However, it now seems that the listing has been revised and some of the changes make for interesting reading. The first thing to note is that Oppomart are listing the OnePlus 2 for $499. This is much higher than what the device is expected to be, as OnePlus did already confirmed the OnePlus 2 will not cost more than $450. As such, the price, although higher, is unlikely to be representative of the final launch price. In terms of the specs being listed by Oppomart, the OnePlus 2 will come sporting a 5.5-inch display. This is the same size at that on the current OnePlus One and is one of the main points changed from the previous listing which suggested a 5.7-inch display. Again, OnePlus did confirm that the new unit is slightly smaller than the One and if the 5.5-inch size is correct, then this means the bezels have indeed been shaved down while maintaining the same screen size. The other important aspect to note, is that the screen is listed as a 2K display sporting a 2560 x 1440 resolution.

Moving on, the Oppomart listing confirms the already known inclusion of 4GB RAM, the Snapdragon 810 processor, a 3,300 mAh battery, dual-SIM support and the fingerprint scanner. Interestingly though, the camera specs listed include a 16-megapixel rear camera. This is higher than what had been 'leaked' in a recent camera review which suggested the camera was only 13-megapixels (same as the One). The front facing camera is listed as 5-megapixel (again consistent with what is on offer with the One). In terms of memory, the device is listed available in 32 and 64GB variants (same as the One) and the device will be available in black and white color variants (same as the One). Of course, this does not represent a confirmation of the specs as the listing could be based on what is known as well as what is expected. Not to mention, they have already changed once in the last week already. Either way, wth the launch only a few days away, it won't be long until these are either confirmed or disproved. 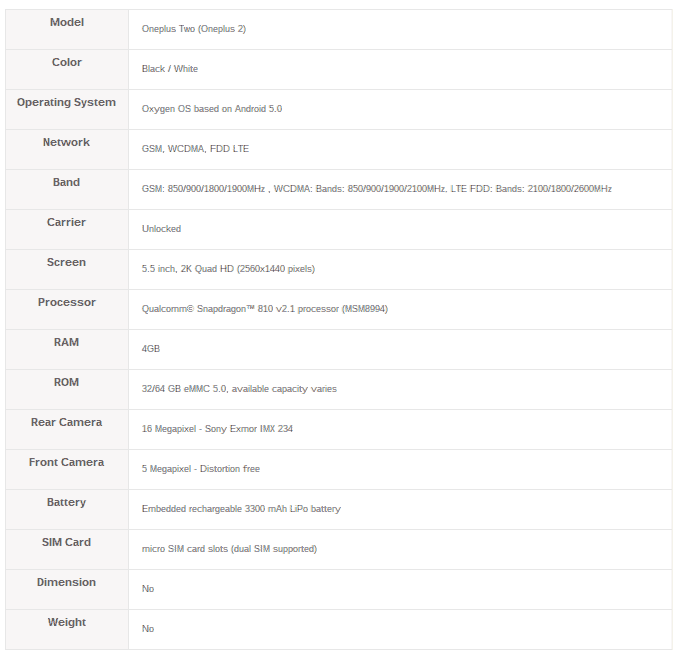